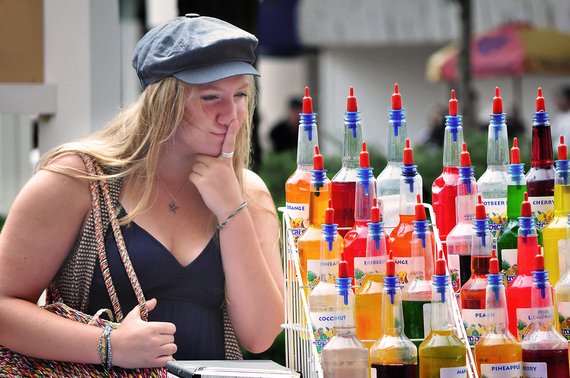 Isn't life great? So many choices. I can pick almost any product I want, consume it how and when I want, wherever I want. Different pricing, different everything, just for me.

From its infancy 20 years ago as a consumer technology the Internet promised "disintermediation" of everything from shampoo to ideas. That promise is extended every day. Choice as a commercial expectation is steadily becoming a cultural one as well.

In the pre-digital world access was the limiting dimension of choice. Now access feels infinite. Want to watch a movie? You've got Apple TV, Netflix, cable on demand, Hulu, network OTT apps. Not sure? OK, maybe music instead. How about iTunes, Pandora, Spotify, Amazon Prime, even, God help us, radio? Or what about meeting that special someone? There's Tinder, OKCupid, Hinge, Tastebuds, Bumble, Match.com, Coffee Meets Bagel and a dozen more.

Not sure where to begin? You're not alone. How often do we end up choosing no movie, no music, no mate?

"Choice paralysis" is a familiar concept to psychologists. There's a body of evidence suggesting an overabundance of choice makes us anxious and mistrustful.

Some years ago, for instance, Sheena Iyengar and Mark Lepper ran a fascinating supermarket study in which shoppers were offered 24 jams to try one day and six jams on another day. The larger display drew more traffic but the smaller display was more likely to turn browsers into buyers. Apparently, what we value becomes harder to know in proportion to the number of choices we have.

If this sounds like a first-world problem, it is. But it's becoming a familiar phenomenon in an age when worlds encounter each other so easily.

Radical autonomy. Today we have more freedom to make our own choices than any civilization has ever known. So why aren't we happier?

We're asked to make complex choices about a multitude of subjects we can't possibly know all about. We're expected to plan our own retirements but reminded all the time that anyone selling us advice more often than not has some back-end incentive we don't always understand. Every year we're asked to pick different health plan options but good luck trying to compare them. Or we sensibly choose a no-fee credit card and then discover it has a tight payment window with high interest and late fees.

We don't know what, can't distinguish which, don't know whose opinion to trust. Mistrust begins to feel like wisdom.

It is surprising to observe how much the choices we make are weighted toward emotion over information. A point of view becomes a fact because we believe it. That's a dangerous thing around anyone with a willingness to fabricate the truth.

It isn't just that making everything a personal choice is exhausting. A world that celebrates individual choice also makes us lonely. It goes against our nature as social creatures because part of how we choose is with reference to what everyone else is choosing.

Radical autonomy has been put literally in the palm of our hand. It is having the unintended consequence of making us leery of anyone and anything asking for something.

A transitional moment. This is a transitional moment, one of those times when basic presumptions change radically. Like the lag in cultural norms that trailed the industrial revolution or second-wave feminism the conventions of living have not caught up with a changed world. The stress is enormous in the near term.

Our brains have heuristics for making choices, many of them probably genetically coded. A world where there's always another possible choice trains us to mistrust that basic process. We compulsively ask ourselves, Do I really have enough knowledge?

People will accept guidance without knowing all the information when they trust. Behavioral psychologists, for instance, have established that employee participation in defined contribution plans is higher, returns are better and satisfaction is greater when plans are designed as opt out rather than opt in--when the choice, in other words, is made for us and we trust its value.

There is a market opportunity for intermediaries who take the pain out of choosing. Think Kayak and Trivago, which have made a business out of scraping options from the many travel and hotel sites that were once supposed to make life easier. Or Amazon, which succeeds not just because it offers price and convenience but because we trust it to stand behind its sellers and because we can compare our choices against what a community of other buyers have chosen.

Finally, consider the work being done with bots to help us filter choices, not to expand them. These text-based interfaces reduce complexity and make recommendations. Bots are patently algorithmic and yet our interactions with them can feel weirdly human.

It's kind of creepy, but there you are. The choice is yours.

"The End of Diversity"
Companies regularly measure diversity in terms of gender, race or age, implying that demographic mix translates into high performance. But at the same time, companies make deliberate efforts to iron out differences, hiring candidates for "fit" and evaluating employee performance against an ideal type. This isn't diversity. This is confirmation bias.

"Tesla's Gigantic Concept Test"
Tesla has moved test and learn into the R&D phase. Within the first month of unveiling the Model 3 concept, nearly 400,000 people have placed orders. The launch, if one may call it that, was a gigantic concept test for a car that is yet to be built. This was Kickstarter on a grand scale. But Tesla is not testing a version of a car. Tesla is capturing market share even as its car is being designed.

"A Picture's Worth a Thousand ... What?"
Notice how many ads have an image, but no text? They're more clever than you might think. Advertising increasingly depends more on images and less on words. How ironic that this is happening when it's harder than ever to control the message embedded in an image. Images now destabilize the moment they are released into the digital wild ... but maybe that's a good thing.