April 24 marked 101 years since the start of the Armenian genocide, when Ottoman Turks killed approximately 1.5 million Armenians, Assyrians, Greeks, and others. The Republic of Turkey denies that the crime was a genocide and goes through great strides to suppress genocide recognition and research through propaganda and inaccurate information taught in schools. Since this tragic crime against humanity occurred, tremendous division exists between the Armenian and Turkish communities as a result of Turkey's refusal to acknowledge fully the atrocities committed. We discuss reasons for Turkey's denial in our April 22, 2015, San Diego Union-Tribune op-ed. 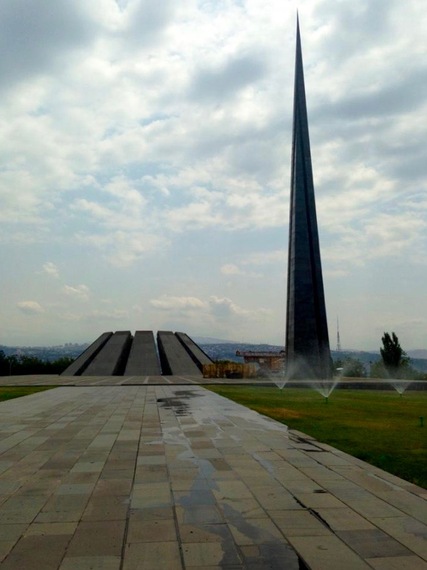 The vast majority of the international community and historians recognize this calamity for what it is (Raphael Lemkin, who coined the word genocide, once said, "It happened so many times...first to the Armenians, then after the Armenians, Hitler took action"). However, a country that peculiarly joins Turkey and the United States in their refusal to stand with justice is Israel. This is ironic and unfortunate because if there is any group that understands the horror of ethnic cleansing and terror against a people, or the pain families have endured from generation to generation based on historical unspeakable acts, it is the Jewish people, founders of Israel. Remember: The world also ignored the Holocaust during World War II.

There are two primary reasons Israel refuses to stand for historical accuracy. Israel has had a strong political and military relationship with Turkey, even after Turkish President Tayyip Erdoğan's rise to power. Like the United States, Israel's strategic relationship with the Middle Eastern nation has been more important than participating in a global effort to acknowledge the genocide.

"I think Israel doesn't want to have another Muslim adversary state near its borders, so strategically, they are interested in [not recognizing the] Armenian genocide in order not to lose Turkey forever," stated Roman Smbatyan, an Armenian history and Middle Eastern history faculty member at UC Irvine.

The second reason is that Israel has a close economic relationship with Azerbaijan, and Armenia and Azerbaijan are in a heated dispute over Nagorno-Karabakh. Armenian-Azerbaijani contention surrounding the disputed territory of Nagorno-Karabakh has been a hot topic in global affairs since the dawn of the protracted conflict in 1988. As Soviet states and neighbors, Armenia and Azerbaijan fell victim to Joseph Stalin's divide-and-conquer politics, igniting waves of national consciousness and hostility. In the 1920s, Stalin's attempts at appeasing Turkey--a brother state of Azerbaijan--for oil resources caused Nagorno-Karabakh to be geographically placed within Azerbaijan. Nagorno-Karabakh, a predominantly Armenian ethnic exclave, drove hundreds of thousands of Nagorno-Karabakh Armenians to demand a referendum to secede from Azerbaijan in 1988 and unite with Armenia. The Azerbaijani authorities declared war on Nagorno-Karabakh, leading to a four-year bloody conflict with more than 30,000 combat and civilian deaths and more than 1 million internally displaced persons until a ceasefire agreement was signed in 1994. Armenian forces won the war, seizing seven districts between Armenia and Nagorno-Karabakh to connect the two pieces of land.

Israel imports roughly 40 percent of its oil from Azerbaijan and ships a significant amount of defense systems and weapons to the former Soviet Republic. Smbatyan added, "Israel has had very good relations with Azerbaijan for the past decade as they were (and perhaps are now) considering Azerbaijan as a possible ally against Iran. In case of a war against Iran, they could use the territory of Azerbaijan to bomb Iran, and this topic was actively discussed from 2010-2011 when the war between a U.S.-Israeli alliance and Iran seemed inevitable."

As the Washington Post's Ishaan Tharoor wrote, "after the European Parliament passed a resolution calling on Turkey to recognize the Armenian genocide, Azerbaijan's foreign ministry spokesman said it was an example of European double-standards--since Armenia has yet to atone for its alleged role in deadly massacres in the 1990s. There are multiple, complicated layers of history here, but Israel knows what's clearly in its interest. Azerbaijan, petro-rich and perched on Iran's border, is a useful friend--at least more so than tiny, land-locked Armenia."

"The United States prides itself in being the leading voice in the world championing value-based interest formations as the basis of a new post-World War II international political order, while Israel's creation at inception can be argued to have absolutely depended on it. Unfortunately, hypocrisy is a small price to pay in exchange for military bases and petroleum," explained Los Angeles-based attorney Edgar Martirosyan. "It is, nonetheless, shortsighted of both states to adopt policies predicated on pursuing narrow and short-term interests. It is no surprise, therefore, that both powers have squandered their moral imperative, and find themselves isolated on the global stage more frequently."

The issue here should be something that far exceeds economic issues. "In foreign policy, there are interests and there are values," the Zionist Union Party's Nachman Shai told the AP. "In this case I think values should trump interests. As Jews, we must recognize it."

Israel must also acknowledge the history of its centuries-old Armenian quarter and church that reigns strong in Jerusalem. Just recently the Armenians of Israel protested the government for selling arms to Azerbaijan.

Both Israel and the United States should place values and justice ahead of strategic and economic interests. It is a shame that both countries refrain from doing so when it comes to recognizing one of the 20th century's greatest atrocities.

Michael A. (Mike) Moodian is a former chairman of the World Affairs Council of Orange County (Calif.). Hasmik Piliposyan is the president of the UC Irvine Armenian Students' Association.