There it is again -- like a poke in the eye.

No. No. No. FRC is not just another "conservative" political outfit. It is an anti-gay hate group -- so classified by the Southern Poverty Law Center, which is in the business of tracking such things.

You can't make this stuff up. But you can find it easily enough, catalogued on the websites of SPLC, GLAAD, and Wikipedia. Even FRC's own site, couched in more polite language, flouts both decency and settled social science in stating that "homosexual conduct is harmful" to individuals and society, "unnatural," and "associated with negative physical and psychological health effects" and that "sympathy" should be extended to those who "struggle" with same-sex attraction. 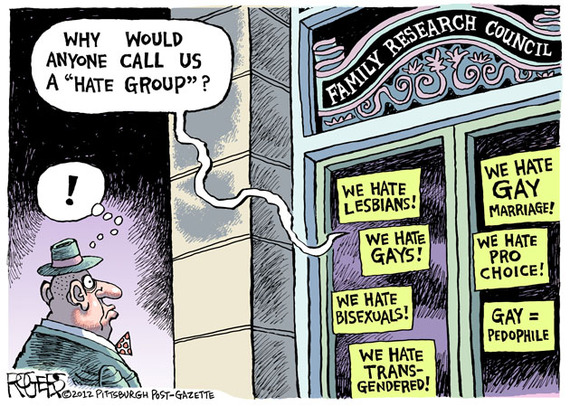 Why do responsible news organizations like the Times (and CNN and MSNBC) give a platform to exponents of this type of hateful nonsense? Would they feel compelled to quote a white supremacist to provide "balance" in a story about reauthorization of the Voting Rights Act? If this sounds like an unduly harsh analogy, you might want to know that in 2001 Perkins gave a speech before a white supremacist group, standing in front of a Confederate flag.

Granted, it may be tough nowadays to find actual mainstream conservatives still interested in defending marriage discrimination in pointed, quotable terms. Compare the artful non-answer Jeb Bush felt compelled to give a couple of weeks back with his brother's enthusiastic embrace just a decade ago of a constitutional amendment barring all same-sex couples from marrying.

But that's no reason to lend respectability to extremists. Some issues do not have two legitimate sides. If this one still does, it should be possible to find someone to quote who isn't a confirmed bigot.