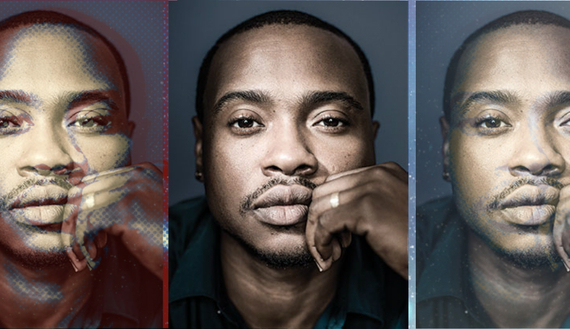 2015 was a star-studded year for the Trans community. We heard big names thrown around the media, like Laverne Cox, Janet Mock, and of course, the now infamous Caitlyn Jenner. Where is the common thread between all these women? Well that's the common thread right there. We only hear about trans women. America has been specifically engaged in conversations about trans women, which has continued to erase every day trans men from the conversation almost entirely. Especially trans latin men and trans men of color. To better understand the complexities of this conversation, I decided I wanted to dig deeper and understand what about this conversation is so difficult to acknowledge.

"I feel like in the media trans men are Chaz Bono or an abstract concept", says Kaleb, a black trans man looking for more reflections of men like himself in the media. "And shoutout to Chaz for the representation, but I'd appreciate some media attention for guys that look like me." When I log onto GLAAD.com's website and search for Black Trans men, I only get one result: Tiq Milan. His profile indicates he's the Senior Media Strategist for GLAAD. I've seen him on Buzzfeed before. All his work in the media is only a small part of what makes him noteworthy. He's done more than enough to be the face for trans men across the board. I only have one issue with this search result. Why is there only one? How many trans people of color are on the board? Don't worry, I'll wait. It's most certainly not because other trans men don't wanna step up to the plate and represent. There are dozens of average everyday trans men of color waiting in the wings to be heard. It's simply that the press doesn't seem to want to make space for their narratives too. It's a problem that many media outlets fail to address. Why isn't there more black and brown trans people in power and in the public eye?

For many trans men like Kaleb, it's not just about the overall representation that's lacking the media. It's about the nuances of how these representations are crafted. "I'd want to see guys in their area of expertise, so artists and musicians and writers and actors and businessmen. Really more profiles and documentation of our experiences,"he says. To him, it's about more than establishing a new stereotype to pander among the rest. "Personally, I'm tired of being that transgender black guy who makes good drinks instead I want people to understand that I'm an excellent barista who is also trans. That's what I'd want to see more of," says Kaleb. He's ready for that change, because like many he's tired of being left out of the conversation. Even though transgender women are facing higher rates of violence, male privilege does not erase the other stigmas that follow the intersections of being black and trans.

To some, the simple idea of being transgender seems like rocket science. Kaleb says it's simpler than that."In our society transitioning from female to male isn't as difficult for the ignorant grasp," he writes. This makes me chuckle. "The element of male privilege that I have when people read me as male, and the benefits that came from masculine presentation before I came out as trans... I think the FTM transition almost follows misogynistic and transmisogynistic beliefs for some people," he says. He's referring to people who believe that trans men only transition to gain male privilege. For black trans men, perhaps they do gain a male privilege, but they do not lose their blackness. "I walk down the same streets I did a year ago and when I was read as small, masculine black woman the way people treated me was mostly unremarkable. But today as a black man, I'm instantly a threat. By default, I guess,"says Palmer. The mere thought of this jars him. "The same white cis women I would have walked past a year ago, now cross the street to avoid crossing paths or guard their belongings. I'm the same 5'1" and I'm still working on gaining muscle mass, so I have the same physical ability to be dangerous. It's purely social," he adds. 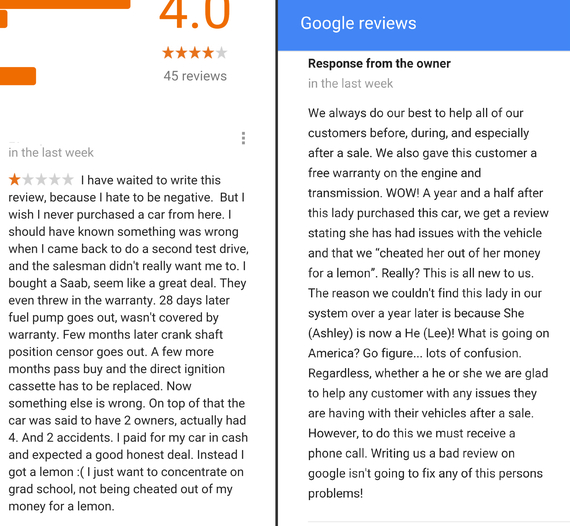 The conversation of privilege when it comes to trans men is layered, like a spider web. Especially for trans men of color, who are constantly up against the many stigmas of socioeconomic discrimination. For trans men like my friend Lee, the rabbit hole goes deeper, and gets darker. Lee is a hardworking american, like you and me. Like any other person, he saved his money for years and went into buy a new car. He paid that day, cash. What happened next, was even worse. "I had just spent five thousand and I had to wait to get the fuel pump fixed. Kept having more problems, spending more money" says Lee, who was publicly harassed recently by the automotive establishment, Hollingsworth Auto Sales who sold him the car. Just check out the exchange above between Lee and the Auto place on google reviews.

This story is not the first of it's kind by any means. Trans people of color face some of the highest rates of harassment, unemployment, and all the backlash that comes with redlining in communities of color as well. For the trans community, the outright transphobia we face can be some of the most brunt. "I spent about sixteen hundred dollars replacing the pump. I got a lemon. I was upset about the transphobia of the comment. They didn't even say anything about the car," says Lee, who expressed disappointment not only for the establishment, but for his concerns of safety. "It was concerning, because I live in North Carolina. I live in a big community, but outside that community people can be close minded. I live by myself, i'm a student. You hear over the year about so many trans people who have died at the hands of murder," says Lee. He refers to the many incorrectly documented and undocumented crimes, which occur mostly in small counties where the stats aren't worth counting to them. The fear has become yet another burden for Lee, who still worries for his future. "I work two jobs, and I'm coming home pretty late. When it's dark out, it's like there's always someone looking over my shoulder. It's just a very scary place to be in," he says. Hopefully someday in a world where trans men of color go unheard, that will change. Just like us, they want to be heard too.