According to the latest statistics, nearly 40 percent of adult men snore. And that number nears 100 percent for adult men who play husbands with a hot wife on a sitcom. Think The King of Queens, for example.

If you are a chronic snorer, you are likely to experience excessive tiredness as a result of not sleeping, and you're at an increased risk for a variety of diseases, including heart disease -- depending on the snoring's severity.

And if you're one of the 40 percent of adult men who snore, you likely have just one question: Why is my wife lying? Seriously. I don't snore.

OK, two questions, the second being: Why doesn't my snoring wake me up?

But before I answer that question, let's briefly rewind. 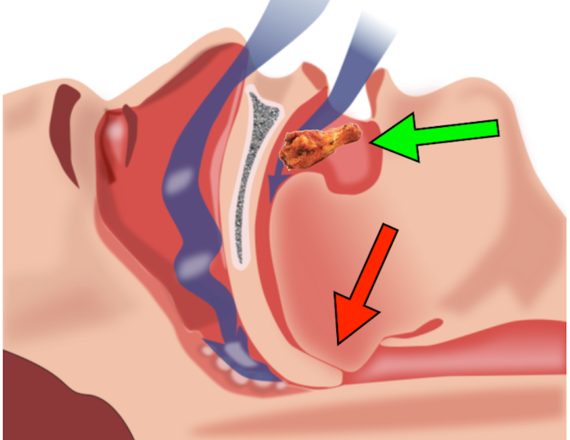 The noise you hear from snoring happens when the airway in the back of your throat narrows or constricts when you're in the prone position. Then, as air headed for your lungs passes over the now narrowed opening, it's met with resistance, and the throat's soft tissue vibrates, resulting in the familiar sounds we associate with snoring. In other words, your windpipe can collapse or become obstructed by, well, the fat in your neck, making it harder for you to breath. And as you suck in air, the space it would ordinarily fill in the back of your throat when you're standing is now narrowed. causing the soft tissue to vibrate and make that sound.

While snoring more commonly affects the overweight, there are some men who have a structural "problem," meaning a naturally occurring narrowing of the throat, which causes them to snore, unrelated to their weight.

Doctors worry that severe snorers may also be suffering from sleep apnea, a dangerous and potentially deadly condition in which the throat narrows so much so that you are momentarily deprived of oxygen while CO2 builds up in your bloodstream -- because not only is oxygen in short supply coming in, but CO2 is not getting out. Snorers with severe sleep apnea often find themselves waking up gasping for air. People with milder cases of sleep apnea may only wake themselves up just a bit, not enough to remember in the morning but enough to severely disrupt the much-needed sleep cycle.

If you think you are suffering from apnea, you should schedule an appointment with your doctor ASAP!

OK, now back to the question of why my own snoring doesn't wake me up. For the answer, we turn to a professional, Dr. Meir Kryger of the Yale University School of Medicine, who said:

In other words, while we're sleeping, significant parts of the brain are sleeping too. Doctors refer to this prolonged cycle of sleep, when the brain shuts down nearly entirely, as "Gary Busey-ing."

Anyway, yes, during sleep, the brain continues to tell the heart to beat and the lungs to breathe, but in order to get some rest as well, the brain ignores some sensory observations that it thinks are not life-threatening. For example, you stay asleep while you are snoring, or if you doze off with the TV on, but if the brain senses danger, like a fire alarm, you wake up. Or if the brain senses a lion rustling in the bush just outside your tent, you wake up. Or when your brain discovers your 3-year-old child has entered your bedroom to tell you about the monster under her bed, you immediately snap to attention, unable to go back to bed for a day, perhaps even two.

Jon Hotchkiss is the creator of the new six-hour science TV series This vs. That, hailed as "revolutionary" and "hilarious" and mentioned on NBC, CBS, CNN and BBC. He invites you to come check out the show.