It's a bad sign when I'm on a date and I miss my dog. If I look forward to drooly, droopy jowls rather than Mr. Comb-over's kiss, it's time to call a cab. Don't get me wrong; I love men. It's just that in a lot of cases, I love my dog more. 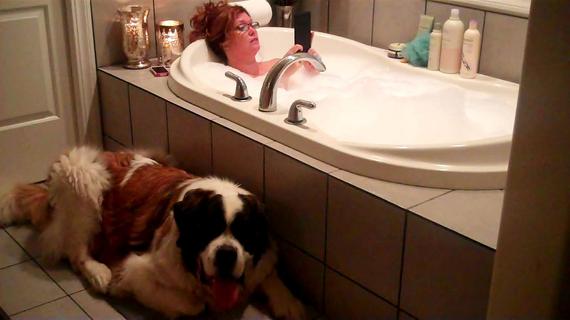 This wasn't always the situation. I was a confirmed cat person for years. However, heading for divorce and in need of some serious extra credit to get into Catholic Heaven, I promised my sons they could have a dog. After researching breeds with the shortest life span, 6-8 years max. -- I had no intention of living with another mistake for 15 years -- they decided on a St. Bernard. In January 2009, we brought home Big Ben.

We went through the typical puppy years. He ate pencils, rolling pins and a table or two. He broke through the same screen door weekly. In six months, he gained 106 pounds. He learned to jump out the car window. I chased him through intersections, a golf course, school parking lots, tennis courts and soccer camp. He became so strong, instead of walking the dog, the boys quickly learned to body surf. Realizing he was too big for the boys to handle, by default, Big Ben became my dog. 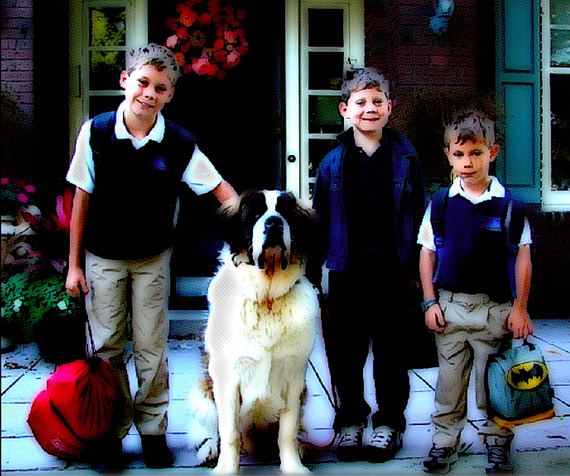 After nine months, I'd had enough. I was depressed about the state of my marriage, the kids sensed the tension and drool was everywhere. It hung from lamp shades, chandeliers, drapery rods and most often, unknowingly, from the back of my head. At one time, I owned 17 lint rollers. I called rescue shelters to take him. But each shelter encouraged me to work with him to properly bond. Eventually, he obeyed a couple commands: sit and... Well, OK, maybe he just obeyed one command. But when the boys went back to school that fall, Big Ben and I clicked and became inseparable.

Sure, he has annoying habits, like drinking out of toilets, snoring louder than a freight train, producing poop larger than sandcastles and consuming nine cups of food plus five hot dogs a day. He hides his treats all over the house, like a squirrel preparing for winter. I find string cheese under drapes, hot dogs in sofa cushions and once I found a three-day-old piece of pizza behind my pillow.

But he loves me. Unconditionally.

He lets me talk for hours, never interrupts and five minutes later, still gets excited at the sound of my voice. He sticks to his word. He never says he will get tickets to the movies and doesn't. He never commits to dinner at 8:00 and then is a no-show. And he certainly knows when to keep his mouth shut. If my jeans are a little tight or "Downton Abbey" is about to begin, he never voices his disdain. We don't argue about politics, religion or who drank the last Diet Coke. 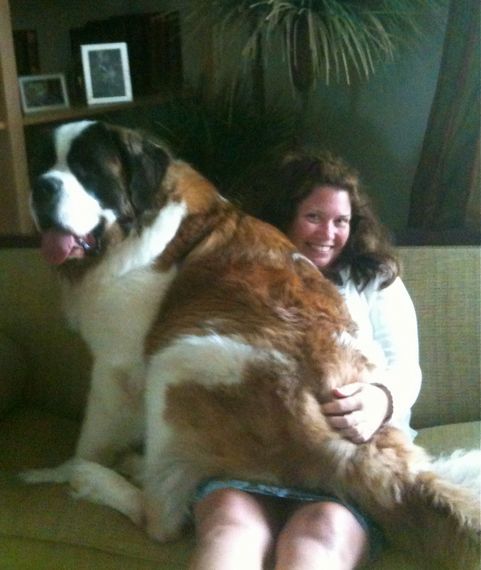 My divorce required so much change. The kids needed my attention to help work through their anger and anxiety. Not being part of a couple, the dynamics of many friendships changed. Saying goodbye to a beloved home was heartbreaking, and the fear of the unknown seemed to hover over our heads the entire first year. However, one thing never changed: My dog was always by my side. No matter my marital status, my mood, my bank account, my home, my tears, my laughter, my disastrous dates and the many nights home alone when the boys are with their dad, Big Ben has been next to me.

I don't believe it's a coincidence my boys chose a St. Bernard. St. Bernards are said to instinctively anticipate avalanches and storms. They rescue people who are lost or stuck. Big Ben walked into a doozy when he came to our house. And he rescued me. He continues to remind me that loneliness is a choice. A full life takes many shapes and forms. The Joneses have theirs, and I have mine. The sky is the limit with a companion that provides unconditional love.