It’s classic, but so unsettling: a bruised face. A black eye. A terrified victim crouched in a corner. A husband hitting his wife as a child looks on in fear.

Are you feeling uncomfortable? Want to turn the other way? If so, you have plenty of company.

These are the types of jarring and violent images that depict the terrible realities of domestic violence in popular culture, advertising and media. But a lot of the time they make us feel discouraged and we just want to tune out altogether.

This kind of portrayal relies on a negative shock factor that may undermine its effectiveness. Experts say that overly negative awareness-raising attempts may actually prevent important messages from resonating with audiences.

And the statistics are clear and validating: Americans aren’t talking about domestic violence. According to the AVON Foundation for Women, 67% of Americans have never discussed the issue with their friends and family, even though 80% of us believe that domestic violence is a problem in our society. 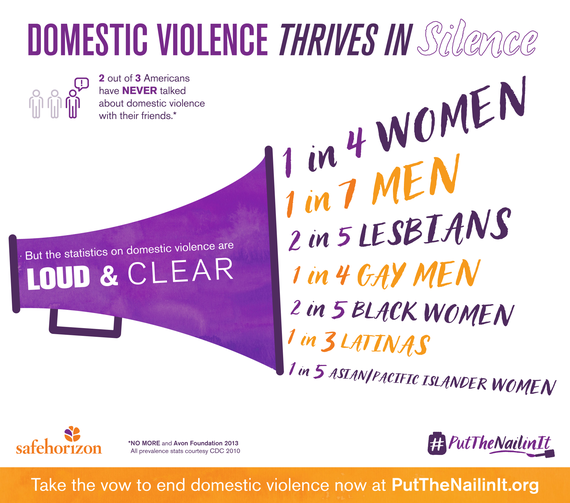 So how do we break through the silence that allows domestic violence to thrive? At Safe Horizon, we grappled with that exact question and our answer is simple: let’s focus on what’s positive by asking people to make a small statement, which we believe can make a big difference.

That small statement? Painting your left ring fingernail purple—the color of domestic violence awareness—as part of our #PutTheNailinIt campaign. For some, it could be a stylish addition to their fashion choices. For others, it might be a bit more out of the ordinary. And for many, it might accompany a donation. But regardless, the statement is the same: This is my vow against domestic violence. I stand with survivors and support the services that can stop violence in their lives.

And we can now say from experience that it works.

The data so far have been impressive: #PutTheNailinIt received more than 82 million impressions on Twitter last year, and attracted donors from 46 states and 5 countries, as some examples. But it was the stories shared by those who took part in the campaign that were perhaps our biggest proof points.

Rock star Dave Navarro, who tragically lost his mother to domestic violence when he was only 15, learned about the campaign when he saw our PSA on Investigation Discovery. And he recently told us that the campaign resonated with him because he wanted to “keep that conversation happening so this type of thing doesn’t happen to anyone else.”

In 2013, AVON found that 3 out of 4 parents said they’ve never had a conversation about domestic violence with their children. That’s why moving away from a bruised face is so important. Parents need a way to engage in what can seem like an unimaginable conversation to have with a child.

One mother shared with us that “When my daughter was born, I knew that some things would be harder for her and there was so much to teach her,” she says. “She’s five now, and one day asked why my nail was purple. I told her about #PutTheNailinIt. This campaign gave me a way to talk to her about healthy relationships.”

Inspiring dialogue is a powerful thing. Our hope is that with a lot of these small statements, and the conversations they open up, we can make a big impact in the lives of survivors. And that should be reason enough to offer a different kind of domestic violence message that focuses on providing safety, hope and confidence to victims.

As one survivor told us, “You’re not seeing a bruised face or someone with their head down… #PutTheNailinIt allows everyone to talk about domestic violence and not be ashamed.”

If you or someone you know is experiencing abuse, you can call Safe Horizon's hotline at 1-800-621-HOPE or visit its website.

PHOTO GALLERY
Celebrities who have taken the #PutTheNailinIt vow to end domestic violence.
Download
Calling all HuffPost superfans!
Sign up for membership to become a founding member and help shape HuffPost's next chapter
Join HuffPost 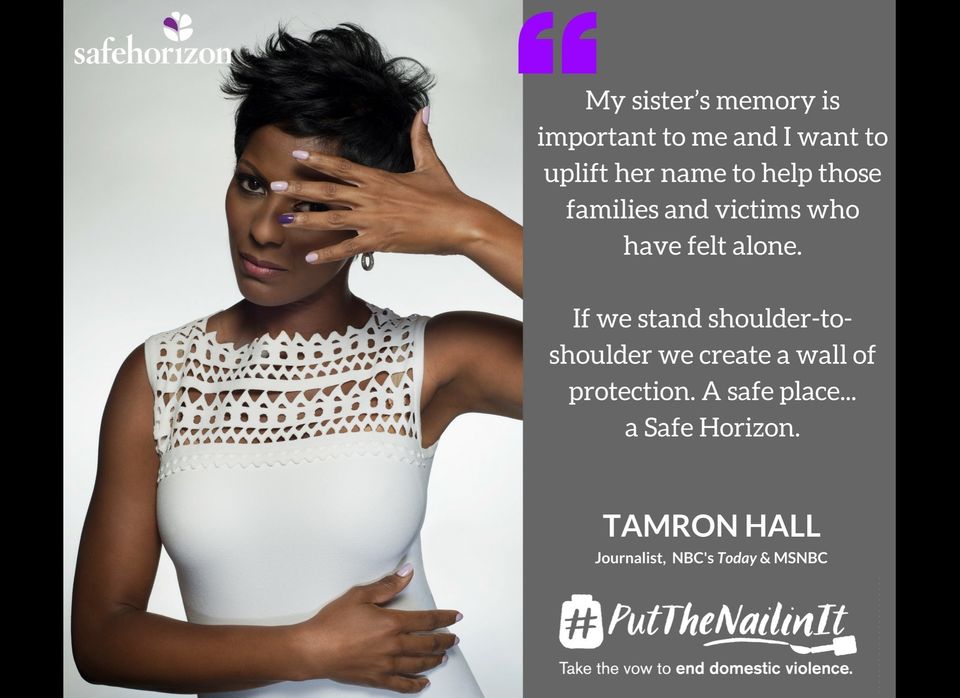