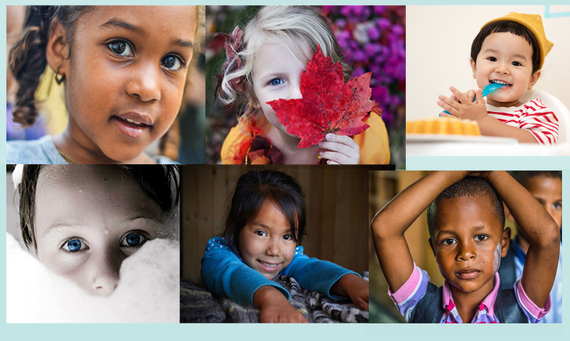 "Example is not the main thing in influencing others, it is the only thing."
-- Albert Schweitzer

These children -- your children, my children, the children of the world -- are why Donald Trump cannot ever be our president.

Because Donald Trump is, quite simply, the worst example we could possibly inflict upon those children. On ourselves. Our country. The world. The universe at large.

There may be worse people; I'm sure there are, but odds are good they're either in prison, running multi-level marketing scams in nondescript towns, or living in basements trolling ecologists and women with money. And none of them is actually running for president.

And Donald Trump does not possess, and is utterly incapable of, embodying and exemplifying the kind of integrity, consideration, grace, wisdom, compassion, impulse control, verbal acuity, knowledge, experience, honesty, and simple good manners to not only run this country well, but be held up to our children as someone to emulate; to admire as a mentor, a leader, a person worthy of awe and inspiration.

Donald Trump is none of those things. In fact, he is the exact opposite of those things. And we have an obligation -- as caring, thinking, conscious Americans -- to not allow our children, our country, our world, to be inflicted, infected, with the kind of bottom-feeding demagoguery that he and his cabal of alt-right coattailers would impose upon this country.

I realize my opinion is not remotely decorous (which I usually try to be), but when we have an FBI director come out on a Friday morning eleven days before the election to toss a nebulous, noxious grenade on the field, literally throwing that election into a frenzy of questions, lies, suppositions, intimations, and misinformation, the gloves come off. We go to the mattresses.

Because it's too late for that kind of manipulative nonsense (especially for emails described as: "not to or from Clinton... contained information that appeared to be more of what agents had already uncovered" - LA Times). The stakes are too high, the outcome too important, and we cannot allow this election to be thrown to a declared sexual assaulter and hate-and-fear mongering demagogue over unknown emails purportedly "connected" to a powerfully qualified candidate who's already been investigated, questioned, and examined by countless political pitchforkers (at the cost of millions) and found to be guilty of no crime.

And frankly, whatever may be found in flagged emails on Anthony Weiner's computer, there will be nothing that makes Donald Trump any less unqualified than he was before Comey's announcement.

Let's be honest: we've been parsing this candidate now for over a year, and while some of us have tried our best to stay above the fray, speaking more to the positive attributes of his opponent(s) than his own litany of turpitudes, the critical mass has hit a tipping point, even for many Republicans:

We've listened to his mangled, misinformed, and misogynistic debate chatter, watched in horror as he maligned those who disagreed with him; felt the reflexive gut punch when he mocked a disabled reporter, slandered Mexican immigrants; denigrated countless women, and dishonored the Muslim parents of a dead American soldier.

We've winced as he behaved, again and again, like a sophomoric bully, so cliched and stereotypical that, were he a movie character, we'd admonish the screenwriter for lack of wit and originality.

We've watched as he's exuded craven disrespect toward his Republican opponents, denigrating with grade-school insults and absurd aggrandizements of his own self-assigned superiority; recoiled when he chortled repulsive taunts at his female opponent, whether sniggering as Clinton dealt with a brief illness, commenting on her body, or insulting her intelligence and character.

We witnessed his self-proclaimed penchant for sexual assault, watched tapes of repulsive behavior; listened as he rebutted his own words with wholesale denouncement of credible women who came forth to acknowledge that exact proclaimed behavior, yet additionally watched as he trotted out -- like browbeaten show ponies -- the woman who've accused Bill Clinton of the same.

We've cringed as he's repeatedly denounced and disrespected Barack Obama as a weak leader, making continued inferences regarding his citizenship, while simultaneously praising Putin as admirable and hearty, bragging like a needy child that the Russia dictator said "nice things" about him.

The list is stunningly long and anyone reading this article likely knows it all. But what is more stunning is that anyone who has seen it, witnessed it, heard it, and felt it, could possibly excuse it, deflect it, minimize it, or pretend it really has no bearing on his qualifications for the office.

I watched the circus event of "horrified" Republicans coming out to "unendorse" him after the skeezy "Access Hollywood" videotape, all thundering about how they simply couldn't vote for such a vile, repugnant man... only to, days later, shuffle back, chagrined, tails between legs, whimpering about "Hillary is worse" and how they have to pick party over all else. All else, apparently, being integrity, respect, true family values, civil/legal behavior; honor... all the most basic qualities we expect from a president.

Republicans will ignore the snorting, sniggering man behind the curtain, only to, instead, buy wholesale the lies, propaganda, and misinformation regurgitated from sputterers like Sean Hannity, Alex Jones, House Republicans, anybody at Breitbart, paid CNN Trump trumpets, and the glassy-eyed vacuity of Kellyanne Conway. They're willing to put hands over eyes and ears to ignore or disbelieve anything about Clinton that celebrates her impressive lists of accomplishments, honors, and political victories, only to respond with yelps about the "huge" contributions made by their candidate, a non-taxpaying, bankruptcy bandying blowhard. They insist on digging back decades to slime Bill Clinton while conveniently turning a blind-eye to Trump's more current serial sexual harassment, and his own accusation of rape. They'll screech and scream about "crooked Hillary" while endorsing a candidate who's heading to court on fraud charges with his own purported "university."

This nimble disconnect, this cultish occlusion, would be something to pity and criticize in some circumstances, but when these same misguided partisans push and plot to put an historically unqualified man into the White House, pushback from those of us not in the thrall of nativist bigotry, political myopia, and calculated expediency is critical. Because it's clear that while their own people may occasionally give nod to intelligence and integrity, they simply can't hold their ground.

The Washington Post recently ran a piece titled, Jason Chaffetz just set some sort of modern record for flip-floppery. You know Jason Chaffetz, right? He's the U.S. Republican Representative from Utah, one of the most teeth-gnashing of the cabal browbeating Clinton during the Benghazi hearings. Well, Rep. Chaffetz actually had one brief, shining moment of integrity after the "Access Hollywood" videotape, in which he, face tight with horror and indignation, announced that he could no longer endorse Trump:

"I'm out. I can no longer in good conscience endorse this person for president," Chaffetz said the day after The Washington Post revealed Trump's 2005 "Access Hollywood" tape. The breaking point, Chaffetz went onto say, was that he couldn't look his 15-year-old daughter in the eye and talk about what the GOP presidential nominee said: "It is some of the most abhorrent and offensive comments that you can possibly imagine."

Yet only nineteen days later, with no miraculous adjustment of Trump's history, proclivities or personality, after scores of credible women came out to make claims of sexual groping and assaults perpetrated by Trump, and as Trump continued his denigrating, disrespectful, and dishonest ways, Chaffetz -- the noble, moral, daughter-protecting Chaffetz -- rescinded his outrage with the mewling:

"I will not defend or endorse @realDonaldTrump, but I am voting for him. HRC is that bad. HRC is bad for the USA."

Which tells you all you need to know about Rep. Jason Chaffetz and the Republican party. Their wild-eyed hatred of Hillary Clinton is so "baked in," as pundits like to say, they'd choose to ignore the ignominy of their cataclysmically unqualified candidate to bow to party pressure and the depth of that hate. That's how much they care about the country. About their children.

But one has to ask: what kind of mad skills does it take to morph and parse Trump into someone they can look into the eyes of their daughters and sons and say, "I endorsed him, I voted for him. I declared him worthy of the noble position of president. My vote says I think he sets a proud example of quality leadership and ethical behavior. He is a man of honor who will lead our country, our world, to a new consciousness regarding our planet, our people, and our legacy as human beings"?

Maybe Chaffetz has those skills. Maybe he can look at his daughter -- at himself -- and make that argument convincingly.

I don't think so. I think he and his GOP cohorts have capitulated to political ambition, the preservation of their jobs, and the id of winning. Whether they'll admit it or not, they've abdicated their responsibility to build and contribute to an evolving, culturally expanding, and embracing government that grows with its people, its changing demographics, industries, and sensibilities, while keeping step with our increasingly global involvement and integration. They have abdicated that mission and thrown their children's future under the bus, at the behest of political rancor and the greed of partisanship.

I will not. We will not. Because unlike Rep. Chaffetz, what I perceive as integrity and the qualities of leadership do not change with the waft of political winds. I am not cowed by the demands of angry men and women willing to sacrifice this country and its future, its children, to vaunt a criminally unqualified man to a position of historical power for the sake of political greed and smallmindedness.

Jason Chaffetz may have found the pretzel logic to look his 15-year-old daughter in the eyes while still voting for Donald Trump, still denigrating the highly qualified -- and, hopefully, first female -- president of the United State, but I cannot. I cannot look at my son, the sons and daughters of others; the grandchildren, brothers, sisters, wives, husbands, mothers, fathers, grandparents, aunts, uncles, friends, co-workers, humans of the world and defend a vote for Donald Trump. None of us should be able to. None of us should.

The President of the United States must always be someone whose example of honor, integrity, respect, and consideration is unassailable, something our children can look to with pride; to learn from, to be mentored by; to admire and emulate. I remain convinced there is not a person in this country who can close their eyes and honestly look in their heart-of-hearts, their deepest, most truthful, unsullied part of their psyche, and believe Donald Trump is that person.

He is not. And he cannot ever be our president.

Children collage assembled with photographs (in order) from Michael Mims, Gabby Orcutt, kazuend, LDW, Jorge Barahon, Michael Mims. All (except for LDW's) by permission of Unsplash.