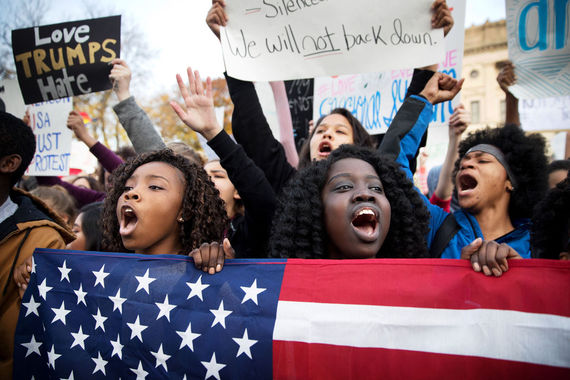 Let me first say that I think Donald Trump's presidency is on a dangerous collision course which threatens our Democracy and the freedoms on which it's built. These are very scary times. Which is exactly why I believe it's an incredibly significant moment in history for our children.

Growing up in the 1960's and '70's in middle class Queens, NY I held the belief, like most other Americans at that tumultuous time, that I'd never live to see the day that a black man would become President of the United States. Thankfully, Barack Obama proved us all wrong. America is a very different place than it was back then. When it comes to racial, sexual and gender equality, my 13-year-old daughter is experiencing what I could only dream of at her age in 1972.

But that's precisely the problem. Our nation's young have been lulled into a false sense of progress. Children today only know of an America with a black president. And how awesome is that? But the sad truth is, the 'post-racial' America that Obama's victory allegedly ushered in never quite materialized. We've actually gone backward. It feels more like the 1950's. Civil rights, McCarthyism, misogyny, homophobia and a palpable intolerance are once again shockingly en vogue. And how quickly it occurred.

Trump's ascension has served to normalize this intolerance and bigotry. A white supremacist is his top advisor. A racially insensitive former general is now Secretary of Defense, and another is about to become Attorney General. The racists are empowered and now have a leader sitting in the Oval Office. They have cultish hats. And transparent code language. They conflate "Making America Great Again" with making it white and male again. During a CNN segment this week, an older white man in Wisconsin sat across from the reporter, Jason Carroll, and unabashedly and with a smile on his face admitted his prejudice against people of color. Hatred is now out in the open, and seemingly acceptable to at least half the nation.

Trump's victory should scare the bajesus out of our young folks. It should teach them the very valuable lesson that they cannot take our progress to-date for granted. That America isn't just lollypops, ponies and Obama. That it can be, and currently is, an ugly place. A place where ignorance, anger and fear can quickly consume and bury for a long time whatever progress we've made and set us back decades.

Trump's victory is a wake-up call. Our children hopefully will grow to know the importance of being engaged. Of knowing that eight years of hope and change can so quickly devolve into darkness and despair. Maybe as they grow they'll be more realistic and respectful of the power they have in their votes than their slightly older 2016 counterparts; the naive, misguided #NeverHillary Bernie Bro's who were so wrapped up in their fantastical Brexit-like 'revolution' that they de facto supported an ignorant sexist, racist tyrant instead of the most qualified candidate in history who voted with Sanders 92% of the time and shared almost all of his, and their, progressive views.

Maybe now America's young will appreciate that in a Democracy a vote means everything. It's the difference between having healthcare or not. Between cherishing the planet or defiling it. Between being protected from Wall Street corruption or fueling it. Between improving public education or dismantling it. Between corporate regulations or unchecked greed. Between welcoming immigrants or banning them. Between diplomacy or hate-Tweets. Between transparency or secrecy. Between real progress or regression. Sadly, not enough of our young voters ran this very simple cost-benefit analysis last year. They were too caught up in registering their protest votes. And now they're protesting.

To be sure, Trump is now inspiring a generation of young people, and children brought by their incensed parents, to march in the streets. To resist. To demand change. To fight against outrageous, oppressive behavior in Trump's reign of terror. The next four years will not be pretty, but they will pass quickly. In the process, they will serve as an incredibly important education for our young. They, and America, will be much better off in the end.