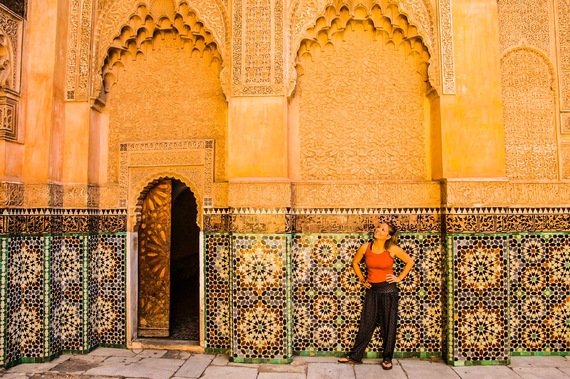 "Danke," the cashier says to me as I walk away with my groceries from one of the supermarkets in Turkey.

I am not German. And despite the name Natasha, I am not Russian either.
Then I must be the blonde from Scandinavia, Australia, or The Netherlands. Nope, Nope, Nope. I go on to tell them I am from the United States. Usually, the country does not register until I finally just say "America." Most of the time I get a cheerful and friendly response, once in a while I will get resentment. But more often than not I will just get confusion.

Actually, in a majority of my travels, I have only met a small handful of fellow Americans. Now, maybe I am just staying at the wrong places, but for the most part, I am surrounded by all the other nationalities of the world besides my own.

So what is it? Why Don't Americans Travel Internationally?

We have so much to offer in our own country
This one is easy and is always my first line of defense. The U.S. is one massive country. Not only is it gigantic, but it is diverse. You can literally go from building a snowman in 20° weather to sipping pina colada's in the Florida Keys all within a 3-hour flight -- no currency exchanges, no red eye flights.

We have extremely pricey passports
Obtaining a passport isn't exactly cheap. At $135, we have the fifth most expensive passport in the world. That may not seem like a lot to some people, but keep in mind that takes 19 hours of work at minimum wage.

We are led to believe that international travel is expensive
Beyond that whopping $135 for a passport, international travel can be extremely inexpensive. However, we are shown that traveling is for the rich, and advertisements lead us to believe that travel is for people living the extravagant lifestyle enjoying a private villa in the French Polynesia. The number one question I get asked is "How can you afford to travel like you do?" Some research and a visit to the World Wide Web will tell you that travel can be incredibly cheap. Most days, I travel on a budget of less than $35 a day -- and yes that is including parts of Western Europe! Put your purchases on credit cards to rack up airline miles, sleep in hostels, travel during the off-season, or do a work exchange in a foreign country.

We aren't given vacation time
The average amount of paid vacation time is two weeks. According to Forbes, the United States is the only advanced economy that does not require employers to provide paid vacation time. To make it worse, Forbes explains that nearly 1-in-4 Americans do not receive any paid vacation or paid holidays. I have friends in France that enjoy more than an entire month of vacation! It's time Americans received the time off that they work for, and deserve.

We don't use our vacation time
That's right, the nearly 3-in-4 Americans that do receive paid vacation time fail to even use it! Oh my, are we that committed to work that we can't even take some time to enjoy ourselves? The U.S. Travel Association found that the average American fails to use even five vacation days a year. By not taking these days off, Americans are essentially paying their employer to be at work. The result? America becomes an overworked, overstressed, and ultimately unhealthy society.

We are in some serious debt
Students in America are facing a major debt issue. I know many people, and personal friends of mine, that would love to travel, but are so crippled by the enormous amount of debt they acquired pursuing a degree that they simply cannot afford it. Another article by Forbes states that America is suffering from over $1 trillion in student loan debt, surpassing credit card debt. Holy.Cow.

We think you have to speak the language
The only language I can speak fluently is English. It's embarrassing and I hate to admit it, but it does get me around the world. I didn't speak Turkish in Turkey, Spanish in Ecuador, or Japanese in Japan (okay, that was a tough one). However, I lived! I did more than just live, I got from point A to point B, I bought things at the grocery store, I even got a great haircut with no common language spoken between me and the stylist. Like a large majority of Americans, I am fortunate enough to be a native speaker of English, the international language. It's always respectful, and fun to learn at least a few words of the language of whatever country you're in, but English is prevalent around the world. If you really can't figure it out, turn to Google.

We are scared
We live in a nation of fear. We are just scared, and of what I'm not quite sure. Every time I leave for a trip my parents get nervous for my safety. This is confusing to me considering mass shootings are becoming the daily norm in the U.S. The most notable places I recall being unsafe are in America. In most foreign countries 99 percent of the people are friendly, and just going about their daily lives. The police in the U.K. do not even carry guns, and the first person to be shot and killed by police in Iceland was in 2013. The world is not on the brink of destruction, and never once in the 40-plus countries, I traveled to so far, have I ever felt threatened.

We are just plain old ignorant
Regardless of facts, there are people that preach nothing but red, white, and blue. I am not knocking my country, for there are many things I love about it; However, we can be an ignorant bunch. The media is partially at fault all, what we see in the U.S. is sensationalized news. World news is only covered if it directly affects us negatively, or is some mass tragedy. When I turn on Al Jazeera, Euro News or BBC News while abroad, I actually see WORLD news. It's embarrassing when I travel and foreigners know the latest American politics, but I couldn't tell you the latest in their home country. There is a serious lack of information about the world affairs in the United States. We seem to be in an isolated bubble, where Americans are afraid of the unknown, or even worse just don't care. I've met Americans that can't locate Australia on a map, warned me not to get sold into sex slavery in Thailand, and come across a few that think Tokyo is the capital of China.

This article was originally seen on The World Pursuit

Full-time traveler, adventurer, and blogger. Living each day out of her backpack.