If you're headed out the door this morning in a suit or a chic outfit, and if you're under the age of 92, I can say with absolute certainly, that it is not Sunday and that you're not going to church.

You might be headed for a job interview, a seminar or a meeting with the boss. You could be off to the art gallery, a fancy restaurant or a funeral. But you're not headed for church. Unless, as I said, you're a nonagenarian. Problem is, by the time you're in your nineties, you're willing to dress up for church, but you can't get your clothes on.

This sad state of affairs is not the way it used to be. Getting ready for church involved a Saturday night bath, the ironing of a white dress shirt (and starching the collar), scrubbing the kids' faces clean and getting out the Sunday clothes. These clothes were the best and the brightest the family had. Maybe some of them were store-bought. More likely, mom sewed the dresses on a treadle Singer machine.

When people go to church these days, they dress like bedraggled slobs. Have you looked around? Men might be in T-shirts mottled with coffee stains, or in ratty jeans, ugly shorts and flip flops -- the most ubiquitous sign in our times of the decline of civilization. Women are wearing stretch pants, sweats, halter tops, shorts and, yes, flip flops. We're wearing essentially the attire of our Neolithic ancestors: a loincloth and sandals. If our clothes are a means of self-expression, we clearly loathe ourselves.

Think about it: We're daring to approach a transcendent God dressed like Neanderthals? Really?

I started to think about this seriously after a trip to India last month. I went up to Amritsar in Punjab and stopped by the Golden Temple, the holiest site of the Sikh religion. There's no "Come As You Are" policy with this temple. I was asked to remove my shoes and my socks, and to wear a handkerchief on my head as a sort of "turban." I also had to wash my hands, and then traverse a small pool of water before stepping inside -- barefoot. 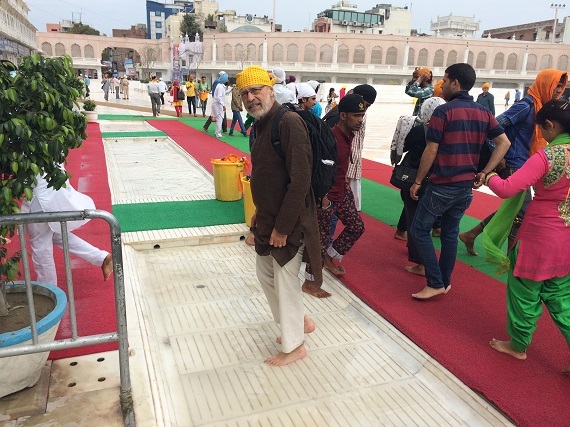 If you want to visit the Sultan Ahmed mosque (the Blue Mosque) in Istanbul, or any mosque, you will take off your shoes, and, if you are a woman, you will cover your head. For entrance into some mosques, hand- and foot-washing is required. 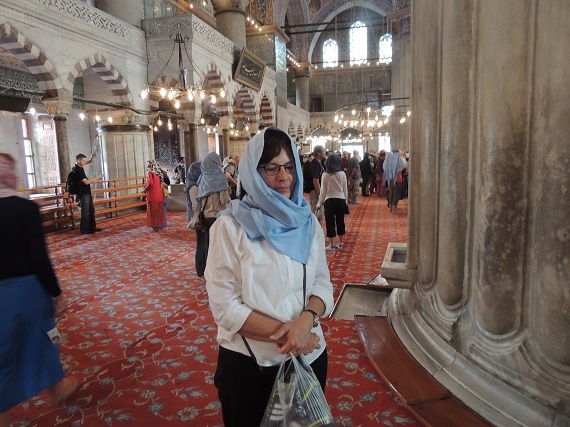 At the Grand Palace in Bangkok, I had to "rent" appropriate clothes to get inside. The dress restrictions there include: no tank tops, no short sleeves that show shoulders, no midriff on display, no backless clothing, no low-cut clothing on females, no pants or skirts that show ankles, and no flip-flops!

So, why don't churches demand that adherents demonstrate some modesty and respect in the manner in which they dress? There are four reasons, at least: It's about the culture, about God, about theology and about evangelism.

Culture. Sartorial standards have been in decline for decades. Grandpa used to go to Wrigley Field to watch the Cubs in a suit! In those days, people dressed up to go out for ice cream. Back then, nurses looked like nurses, not sanitation workers patrolling hospital rooms looking for trash. Doctors looked like doctors. Nuns looked like nuns, not Mennonites. And, of course, we can blame the Sixties, when my generation tore down just about everything, including dress codes. Skirts went up and bras came off.

God. Most Christians don't really have a high view of God. Not sure how this happened, but God's become our buddy. A pal. And a true BFF doesn't care how we look or dress, right? Yet, Christians profess to believe in an omnipotent, ineffable God, a transcendent Being who flung the stars and planets into the universe, and anchored them in space. We believe God is the creator of the life force.

This is what we say. But do we believe it? Not if you look at the way we dress. There's a huge disconnect. It just seems odd to me that Christians (I can't speak to what's going on in synagogues and mosques) who are entering a purpose-built facility to worship this God (whom, they say, will show up for their worship and be present), would dress for the occasion as though they'd just been to a WWE wrestling match.

Theology. Christians argue that God does not look at one's outward appearance -- that is, how well one's dressed -- but at one's inward appearance. For example, the apostle James rails against church ushers who give seating priority to the rich, coiffured and well-dressed (James 2:1-13. See also 1 Samuel 16:7, Matthew 15:18).

Evangelism. There's a concern about evangelism, i.e., attracting people to church. Many argue that if there's a dress code, real or implied, people will opt to stay at home and watch the Home Shopping Network, or something.

These are valid concerns. The lack of dress restrictions is a distinguishing mark of Christianity. Christian houses of worship will not ask you to wash your hands, put on a scarf, take off your shoes -- any of those things -- even though many of these ideas are themselves found in the Bible (see Exodus 3, Psalm 24:3-4, 1 Corinthians 11, for example)

Dress codes will not be coming to churches anytime soon, and they shouldn't. I gotta back off. I know that. As much as I appreciate the dress restrictions found in other religions, it doesn't work for Baptist or Methodist churches. Episcopal churches, maybe. But definitely not Baptist.

After all, "Come as you are" resonates with what Jesus said, "Anyone who comes to me, I will never drive away." (John 6:37).