The Charlie Hebdo massacres highlighted two different cultures to Americans. The first was already way too familiar: Islamic fundamentalism that drives disaffected young men and women to insane violence -- in this case, the massacre of cartoonists who they felt mocked their religion.

The second was something much more recondite: a French tradition of vulgar, obscene, juvenile satire that's completely unlike anything we know (or would likely be comfortable with) here in America. South Park isn't remotely close and seems mild by comparison.

Trying to explain this no-holds-barred satire, the same phrase keeps cropping up in editorials, commentaries, and blogs with nauseating regularity: "They were equal opportunity offenders." In other words, there wasn't anyone they weren't willing to take on. Wow.

It sounds very fine, doesn't it? I mean, who could be against equal opportunity, even when it comes to offense? And yet.... 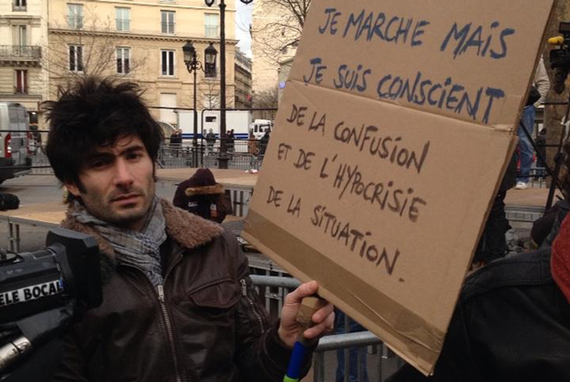 "I'm marching, but I'm aware of the situation's confusion and hypocrisy." (Dalia Ezzat via Twitter)

There are only about 500,000 French Jews in a country of 66 million and France is no longer a safe home. In recent years, Jews have been the target of harassment, threats, mugging, beatings, kidnapping and torture, and murders. Those are generalities, but here are some specifics from CNN International about incidents in 2014 which are up almost 100 percent:

Among the anti-Semitic incidents were reports of Jewish teens, who wore traditional Jewish items like yarmulkes, being assaulted with Tasers, tear gas and pepper spray. A Jewish teacher leaving a kosher restaurant in Paris was attacked, his nose broken and a swastika drawn on his chest. Two teens and their grandfather were chased by a group, including a man wielding an ax, as they walked to synagogue in Paris. Two French teenage girls plotted to blow up a synagogue in Lyon. A kosher restaurant in Paris was firebombed. A kosher supermarket was set ablaze in Sarcelles.

French Jews aren't emigrating to Israel, England and other countries. Let's call it what it is: they're fleeing a land that's had a Jewish presence as far back as Roman times, that was the first in Europe to grant Jews citizenship, that has produced many illustrious cultural figures like Proust, Darius Milhaud, Claude Lévi-Strass, Sarah Bernhardt, and Offenbach.

So when I read that Charlie Hebdo's cartoonists were "equal opportunity offenders," I think that's ducking the issue. I see them as bullies, targeting the besieged Jewish minority that already lived in a state of fear. How is that laudatory? Of course, nothing I'm saying means they deserved death. But it also doesn't mean they were 100 percent heroes, either.

The world doesn't seem to care about how Charlie Hebdo portrayed Jews, and would there have been such outrage if the terrorists had left Charlie Hebdo alone and only attacked Jews? Probably not in France and certainly not elsewhere. Previous assaults on Jews in France haven't sent people out onto the streets in record numbers, so we'd probably have seen a news cycle or two of stories and then silence.

Until the next attack. 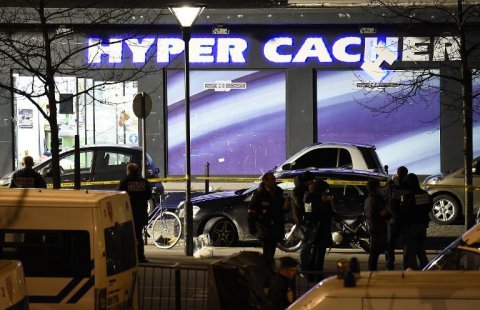