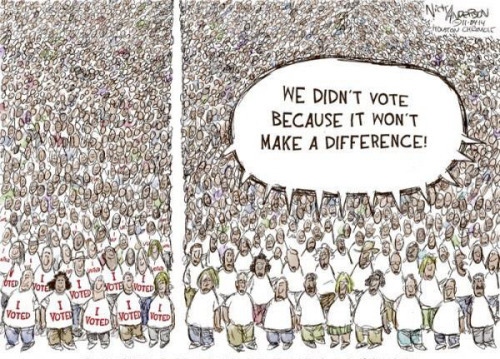 My generation, Generation Y (aka The Millennials), often gets a bad name. We're lazy. We're self-involved. We take too many selfies and are too involved in celebrity news. We are too involved in technology. And I've about had it, like 60 percent of my peers.

But it seems that when election season rolls around, the lazy stereotype starts to show its true colors.

According to data released by the Center for Information and Research on Civic Learning and Engagement, 21.3 percent -- or around 10 million of us turned out to vote in the 2014 midterm elections. The Center for American Progress found that in the 2012 election our generation had 64 million eligible voters, yet only 26 percent of us actually voted. That means a large number of us, 74 percent, didn't vote.

So what's holding us back from going to the polls? Is it really our laziness? Is it the candidates? Maybe they are talking about issues we don't care about or don't know enough about. Are they not using resources to reach us in the correct way?

Contrary to popular belief, we don't really hate politicians or politics. With the age of the Internet, we should be more informed than any generation that has come before us. Everything is at our fingertips. There are videos, websites, social media accounts, anything, you name it, that tells us all about the topics and candidates. You can even get the address, email and phone numbers of your senators and congressmen and women.

We are one of the biggest segments of the population and we are just on the cusp (or already in) adulthood. But many collegiates think that their vote doesn't count and politics isn't relevant in their lives.

Twenty-two-year-old Mary Anna Billingsley believes that, as a generation, we fail to acknowledge how much politics is really involved in our lives. She told me:

They fail to realize that we have taxes taken out of our income, we have laws that we must follow or we face consequences, we have liberties that we take for granted, we have a right to vote for the individuals we think will best govern... It's preposterous for anyone to say that politics isn't relevant in their lives because they truly do have a place in nearly every aspect of our lives. My parents always say that if you don't vote in an election, you can't complain about the individual or their opponent when one is elected because you did not use your right to vote, and thus, lost your right to complain.

Pew discovered in a 2014 study that we are the first generation in recent memory that has higher levels of student loan debt, poverty and unemployment, and lower levels of wealth and personal income than the Gen Xers and Baby Boomers had at our age.

We have had sexual and gender roles challenged, the race debate has come back into the picture, and discussions over human rights are conversations we have daily. We are the most educated and racially, ethnically, and socially diverse of any generation. We don't really remember a government that wasn't in a gridlock.

We are somewhat more upbeat than older adults about America's future.

Forty-nine percent of us say the country's best years are ahead, a view held by 42 percent of Gen Xers, 44 percent of Boomers and 39 percent of Silents. A recent poll for Reason, a libertarian magazine, found that we are socially liberal and fiscally conservative. Two-thirds support legalizing same-sex marriage, 61 percent think abortion should be legal in most cases and just over half believe the drinking age should be lowered. Yet 66 percent agree that when the government runs something, it is "usually inefficient and wasteful." (see chart below) 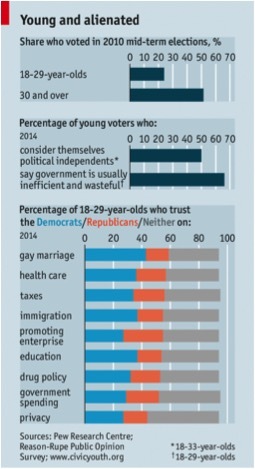 Pew also found that more than 50 percent of Generation Y identifies as independent as their political preference. We are moving away from large institutions like religion and marriage, therefore, party politics doesn't appease us.

Twenty-three-year-old Brendan McGlone believes that it's about removing corporatocracy from our political system. He told me:

We care about making a difference that we can see happen... It is no longer about which side of the political BS spectrum thinks they're right, we know they are both misguided and fueled by greed. But such a daunting task to remove corporatocracy from our political system scares us away. It turns us inside ourselves and we spew hate rather than love, complacency rather than change.

Our stereotypes come out to play if you look at how parties are trying to reach us. An Economist article reported that in 2014, First Lady Michelle Obama told students to "Bring that cute guy or girl that you have that crush on. Trust me, they'll be impressed."

And in Louisiana, Mary Landriu promised lower interest rates for student loans and bigger grants for poor students. She danced to the Wobble and helped a 28-year-old perform a keg stand. Rock the Vote offers a party bus full of drinks, snacks, and goodies as a ride to the polls.

Is that really what we have come to: bribes and making the politicians come down to our level? I'm asking you. Because I honestly think we are better than that. We can and need to come up to their level. If we don't act now, become involved, and pay attention nothing will change. Yes, voting is a right in our country, but it is also a great privilege that a lot of people have to fight -- and even die -- for. The democratic process does not work if we are not connected and doing something.

Geenah Krisht, 22, believes that people who do not vote are lazy and/or ignorant:

There are countries in this world in which voting is not a citizen's right. And, there are people in our country that are fighting to become voting citizens. You only have one life, and if you're privileged enough to be born a citizen of the United States, you should let your voice be heard.... No matter who is listening or who you think is listening, exercise your right to vote.

I don't think it's just on us, though. I believe that politicians need to take some action as well. Social security might be gone when we come of age to collect it. Right now, we don't really care about the Trans-Pacific Partnership. And, although I appreciate him coming to bat for us in his piece, I disagree somewhat with the statement Julian Zelizer said in his CNN article:

We do actually care about abortion and immigration, and we also care a lot about the economy and jobs, climate change and what's happening in other countries. It's because we were told growing up that we could be anything we wanted to be, that includes changing the world. We have become more aware of human rights violations in other countries. We are activists, and we would like our government to reflect the world we want to see.

I'm invoking one of our stereotypes right now: Hey Washington, pay attention to us. We are the ones you should be targeting because -- here's a scary thought -- we are the future. But, in order to invoke the change we want to see, we have to speak up. And for our country's sake, the 74 percent of you who didn't vote in the last presidential election -- go vote.