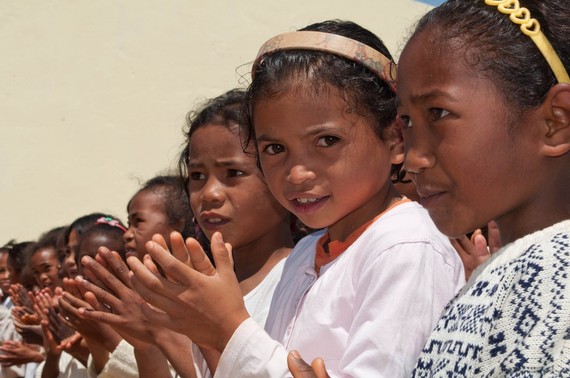 Listening to statistics about the global lack of education for girls from Irina Bokova, Director-General of UNESCO, on this Harvard EdCast, I found myself thinking about a Somali student I once taught.

This particular student, I'll call her Hawo, explained to me that her night school absences were caused by witchcraft. Not witchcraft that she herself was using, or the victim of, but witchcraft used by a neighbor on her brother.

Because I'm an English teacher, Hawo's account of her brother's predicament sounded to me like a mashup of Romeo & Juliet with The Crucible.

The condensed version: her brother was in love with another Somali girl, but her family didn't like him. A complicating factor was an older man, to whom she was contractually engaged.

Eventually, the girl became pregnant. Because this would bring great shame on her family and probable violence upon Hawo's brother, the two of them decided to plead witchcraft as the cause of pregnancy. They claimed that the older man had bewitched them both, controlling them with demonic power, forcing the teenagers to have sex with each other.

Even though this is an absurd story to anyone who's ever been a teenager or raised one, it was a critical fiction. All around the world, girls know that sex is truly dangerous. The sheer scale of global incidences of violence toward females is hard to conceptualize. And that's why this girl's story stays with me beyond its bizarre details. She was a modern Scheherazade telling a story to save her life.

And it was a good story in so far as it was accepted by the insular Somali community in our small town. The teenagers were exonerated and the girl went through with the contract, marrying the older man.

All parties involved moved to a larger Somali community in Minnesota before the girl had her baby, so I never learned what happened. But I can imagine -- and so can you -- because we read. We know how these stories typically play out. It's never good for the girl.

What kind of difference, I wonder, would literacy make for that girl? She was at the beginning stages of reading ability. I doubt that she has progressed beyond that, if the experiences of my other refugee students are a predictor. But would literacy have given her choice? Because I'm a teacher, I believe it would.

Bokova, in the talk, cites UN data saying that two-thirds of the world's illiterate are women. And why does that matter? For Bokova, it's a matter of health and economic outcomes. Put simply, more literacy means more choices for girls and women. It means less domestic violence, sexual assault, sexually transmitted disease. It means that women can help bring a family out of severe deprivation.

"The weakest point, in all the efforts and research," she says, "is the transition from primary to secondary education because this is a very fragile moment for every girl."

She ends the short interview with a plea for advocacy and for men to understand the need for girls to become educated. She ends with a quote that frames the education of girls around the idea of international security. Bokova quotes Nicholas Kristof, the New York Times columnist, who said "An educated girl is more powerful than a drone."

And, I would add: an educated girl is more powerful than superstition. Literacy. That's real magic.