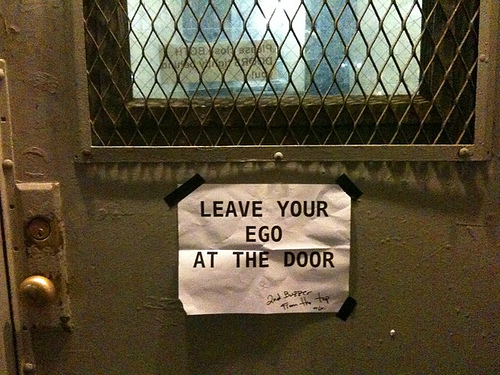 When we imagine a hypothetical, highly successful corporate CEO, we may think of someone who has a big personality, who can immediately take charge when he or she enters a room, and who is perhaps a bit self-centered and ruthless.

Would such a CEO actually achieve successful business outcomes? The answer depends on the time frame we're looking at.

In the short-term, such a CEO may very well drive high performance and achieve great bottom-line results. In fact, one study suggests that highly narcissistic CEOs are better at driving innovation and making decisions during times of rapid change. If the plan is to quickly build and sell a tech company, for instance, an egotistical, narcissistic CEO may just be a good bet.

However, over the long-term, a leader who is highly self-centered is more likely to destroy a company than to maintain a successful one. In a recent interview I conducted with John Stahl-Wert and Kenneth Jennings, authors of the book The Serving Leader, they pointed out a variety of reasons why self-serving leaders are really bad for business. Following are two clear examples.

Failing to Serve the Customer

Perhaps the most obvious problem created by a leader who is very self-centered is that he or she is less likely to focus on how to best serve the customer. As Stahl-Wert pointed out, "Organizations thrive when leaders focus less on themselves and, instead, focus on bringing maximum value to the marketplace and on serving the people who serve the customers."

Although we can't prove a causal link between CEO salary and poor customer service, it seems a rather commonsense notion that a greedy CEO who receives such excess compensation is likely to be very self-centered, and thereby unlikely to be focused on serving the customers and team members who care for customers.

Jennings and Stahl-Wert also mentioned a more subtle effect of being overly attached to ones ego, which can gradually destroy a company over time. Egotistical leaders tend to like their ideas so much that they close themselves off to new information. This leads to numerous adverse effects, including:

The Illusion of the Ego

There's no doubt that healthy self-worth and self-confidence are necessary to be effective as a leader. The problem arises when we are overly identified with the ego, which is the strong sense of "me" we all have that is essentially a collection of thoughts and memories created by our brains.

This is simply not true. When we take a close look at our minds with mindful self-awareness, we can see quite clearly that we are not our thinking, and therefore not the ego.

Intellectually, most of us know that we are not the thinking mind and the ego it creates. We know that thoughts are created by the brain, and that if there is no brain, there is no thinking.

Nevertheless, we still live as though we are that voice in our heads that is constantly talking, analyzing, judging, criticizing, and so on. With mindfulness training, we can transform the intellectual understanding that we're not the thinking mind into wisdom.

For example, imagine that you are sitting still on the subway and you are observing the mind with mindful self-awareness. Imagine that it is completely empty of thought (I know that sounds impossible, but it's actually quite common with extensive practice, especially when that is not made to be a goal).

Now imagine that you observe a single thought arise in the mind, perhaps a thought about pizza. You see this image quite clearly. Then you see the image gradually dissolve, leaving you to observe a mind that is completely empty of thought again.

Assuming you could do this, what does the observation tell you about your relationship to that thought?

The experience above shows us quite clearly that we are not our thinking. We were there observing an empty mind, we were there as we watched a thought arise and pass away, and we were still there after the thought had disappeared. The thought, then, is a fleeting phenomenon. It is not a permanent part of us.

Having an Ego, But Not Being Controlled By It

By taking a few minutes each day to observe the mind in the way described above, we start to see our thinking and the ego much more objectively. It's as though there's some space between our awareness and the ego.

Thus, we see the ego as something we can pick up and listen to when it's appropriate, and simply set down like a smart phone if we decide that's the better option.
With practice, this ability gradually becomes stronger and stronger. We are able to have an ego, but it is no longer in control.

This can have an incredible impact on our leadership effectiveness, as it remedies the significant negative effects - pointed out above by John Stahl-Wert and Kenneth Jennings - of being overly attached to the ego.