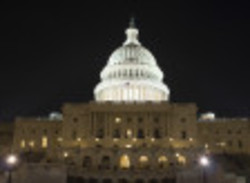 The signs of climate change are there, we just need to pay attention. Weather patterns are shifting, 100-year floods are now a common occurrence, while drought and loss of water-sheds are as well.

More Americans than ever believe that anthropogenic climate change is here.

Today's Congress is filled with professional politicians, who don't act on this critical, important, and extremely dangerous issue. Unfortunately though, it is time to act and stem the tide of climate change. Congress should have acted a decade ago, last year, last week, or even yesterday. But, they haven't. Not in any meaningful way. Yes, we sign climate accords and agreements, but, that only addresses one small facet of the problem. Energy.

Climate change is not a joke. It will affect everyone's lives across the globe. No one is immune, no matter how much money he/she has.

Climate change will displace millions of people living in low-lying areas (Pacific islands, Bangladesh, Floridians). It will affect a myriad of resources from ocean fish stocks, to the ability to grow food, to the migration patterns of various animals.

While I do applaud talks and action on carbon-emissions reduction and renewable-energy; talks and treatises are only a start. To date however, not nearly enough has been done or is being done about agricultural greenhouse gas and carbon emissions.

As I've mentioned in number of other Huffington blog posts, the animal agriculture industry creates as much greenhouse gases as the entire transportation sector; and is on the rise with a larger global population craving more animal products and with the high level of food waste that occurs in our country creating methane, wasting resources, and contributing to food insecurity.

Just this week, new statistics have come out saying that nearly 50% of the food in United States is wasted. Nearly 1/3 of food globally is wasted, and this waste contributes 8% to annual carbon emissions. Our dietary habits of high meat and fish intake, our food-waste, and our levels of pollution are unsustainable in terms of resource allocation, contribution to climate change, and to oceanic degradation.

I argue that our current elected officials have proven themselves incapable of making any truly lasting meaningful policy recommendations, let alone actual policy or laws. Our elected officials are for the most part an older generation, who have condoned the major contributions to climate change. They do not appear ready or willing to change their ways. They do not appear willing to protect the planet for my generation and my son's generation.

That is not only unfair, but it is also unethical, and immoral.

It is time to clean the slate, and only elect officials who acknowledge that climate change is real, who want to act on it, and who will stop letting wealthy interest groups influence; no, rather, buy votes, against action on climate change. I advocate that we are in a crisis. We are in a crisis of inaction, a crisis of co-opting of our elected leaders, and that we are in desperate need of reformation.

This season, really look at your candidate's platform, ensure that it includes issues on climate change, sustainable agriculture, sustainable fisheries and oceans management, and only vote for those who care.

My son's world is overexploited. He may never know clean-air quality, or that certain animals existed in the wild, because they may be "functionally" or actually extinct.

We are perhaps the most powerful government in the world, if we vote for climate-sensitive elected officials who are conservation-minded, other countries will follow our lead. The time to lead-by-example is now.