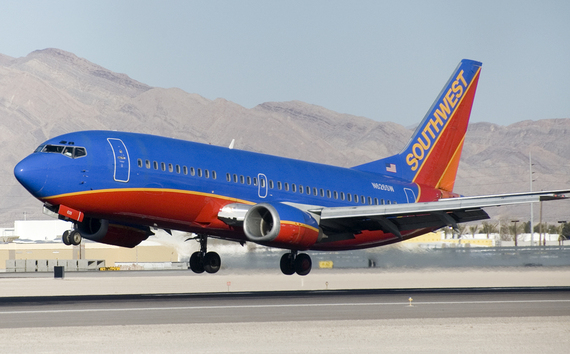 Compassion and business haven't historically been uttered in the same sentence very often.

However, that has been changing in recent years.

More and more businesses are realizing that in addition to helping us be happier and more fulfilled, compassion can actually be great for business.

One of the most touching and striking examples of this comes from an industry that is often referred to as a "commodity industry," commercial aviation. But even in a commodity industry - perhaps especially in such industries - compassion can be a powerful differentiator.

Unfortunately, this powerful example begins with some very sad circumstances.

In January of 2011, near Denver, Colorado, a two-year-old boy named Caden was beaten by his mother's live-in boyfriend. His injuries were so severe that he almost immediately went into a coma.

Medical professionals determined the next day that Caden would not survive, and that he would be taken off of life support that night so that his organs could be donated and potentially help over 20 people.

Mark Dickinson, Caden's grandfather, was in Los Angeles on business when he received the tragic news. Mr. Dickinson's wife immediately arranged for him to fly to Denver, with a connection in Tuscon, Arizona.

She informed the carrier, Southwest Airlines, of the circumstances and let them know that her husband would be rushing to catch his flight in Los Angeles because, if he missed his connection, he wouldn't be able to see his grandson for the last time before the child was taken off of life support.

Mr. Dickinson arrived at LAX in what appeared to be plenty of time, almost two hours before the scheduled departure. But there were long lines at check in. By the time he got his boarding pass, he was already anxious that he might miss his flight. When he arrived at security, he noticed immediately that the lines were lengthy and moving very slowly.

Mr. Dickinson's anxiety escalated significantly as the reality began to sink in that he might miss his flight, along with the chance to see his grandson for the last time. He told security about his situation and asked if he could get to the front. They told him he would have to wait just like everyone else.

After going through security, Mr. Dickinson realized that he was already late. On the verge of tears, he grabbed his shoes and sprinted to his gate in his socks. He arrived at his gate 12 minutes late. His heart must have broken.

"We held the plane for you and we're so sorry about the loss of your grandson."

Although this may seem like a small gesture, as James F. Parker points out in his book Do The Right Thing, Southwest has mastered the art of turning airplanes around quickly. On average, they turn their planes around 15 to 20 minutes faster than their competitors--something that saves Southwest approximately $3 billion dollars per year.

So for Southwest, 12 minutes is essentially an eternity. Making a habit out of holding airplanes for 12 extra minutes would cost the company hundreds of millions of dollars per year.

According to an article on Dailymail.com, as the pilot escorted Mr. Dickinson down the jetway, Mr. Dickinson said, "I can't thank you enough for this."

Little Caden was taken off of life support that night at 9:20 p.m. Thanks to the kindness and compassion of the pilot, and the leaders at Southwest who empowered him to make the call, Mark Dickinson was there to say goodbye.

When asked how the leaders at Southwest Airlines felt about the pilot's decision in an interview with AOL Travel News, Southwest spokeswoman Marilee McInnis stated that, "We fully support what our captain did. Customer service is important and we're not at all surprised an action like this would take place."

The leaders at Southwest weren't upset with the pilot for holding the plane. They were proud of him--as they should be. Southwest is known as "the airline that love built."

And, because the company's leaders have effectively passed on their values and empowered employees to make important decisions on the spot, they helped ensure that the pilot valued being compassionate above short-term gain.

In the long term, his decision will also likely result in numerous positive business outcomes. It was an incredible example of customer service that inspired everyone who saw it, was reported extensively in the media, and will be talked about for years to come, providing Southwest with a tremendous amount of free, highly impactful advertising.

This post was adapted from a section of the book Serve to Be Great: Leadership Lessons from a Prison, a Monastery, and a Boardroom, published by John Wiley & Sons, 2014.