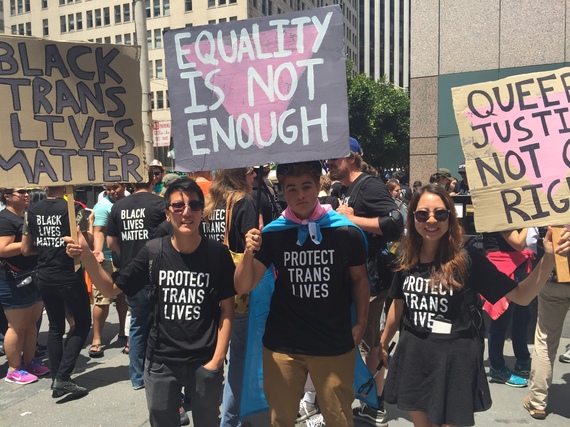 In an era of unprecedented visibility, the transgender community is at a crossroads. Do we work transgender people into current systems such as education and the military or do we work to significantly transform these structures and society as a whole? While the majority of media attention has gone towards integrating trans people into the dominant culture, is this the right decision for the community? Many activists, scholars, and community members say no.

"Do we work transgender people into current systems such as education and the military or do we work to significantly transform these structures and society as a whole?"

I came out as transgender at the age of eight, to a rural community that was not ready to support me. During the next five years, I experienced constant harassment, isolation, and assault. You might think that as someone who has had this experience, I am excited to see hate crime legislation popping up all over the United States. On the contrary, it frightens me. Hate crime laws are framed as initiatives that will end attacks on transgender people, making them "equally" protected under the law. In reality, this legislation is another cisgender issue pushed by neoliberal politicians to further expand prisons and prevent real change.

Hate crime legislation does nothing to protect trans people. Instead, it only increases sentencing for offenders. Is doubling a 7-year sentence going to deter crime? Statistically, the answer is no. Hate crime laws do not look at the roots of the problem, including systemic racism and transphobia. Individualizing the problem by sending one person to prison does very little for our community as a whole and does not work within a restorative justice framework.

"Individualizing the problem by sending one person to prison does very little for our community as a whole and does not work within a restorative justice framework."

People who have committed these acts can be educated along with the public on transgender issues, which will actually stop the violence. This is not to mention many people incorrectly think anti-transgender victimization has ended when hate crime legislation has passed -- and then proceed to ignore the perpetual violence we still face. Hate crime laws are just one of many examples of where "equality" fails to work for the trans community.

It is important to understand that equality and rights are not justice or liberation. Equality does not account for difference in culture, identity or ability. A popular graphic by Out Front Minnesota does a great job illustrating this fact.

Imagine the crates are other people.

A state of equality still leaves the most marginalized groups as they are: oppressed. In 2011, I co-founded Trans Student Educational Resources, a youth-led organization dedicated to transforming the educational environment for trans and gender nonconforming students through advocacy and empowerment. Recognizing this, we changed our name from "Equality" to "Educational" in 2014. Simply, trans equality in education is detrimental to the community.

We do not just want the same access to a clearly broken education system as our cisgender peers. We are committed to educating our communities and the public on transgender issues, which will significantly decrease victimization for all trans people.

"It is important to understand that equality and rights are not justice or liberation. Equality does not account for difference in culture, identity or ability."

With issues like test scores more accurately reflecting race and class than actual learning, we are devoted to fundamentally transforming this system as a whole and making it accessible for everyone, not only trans people. We hope that we can learn about our own histories and communities in the classroom, not just conservative interpretations of the United States. When trans students do have "equal access," people stop paying attention to the issue and assume it is done with. They will also stop donating to organizations. Additionally, equality laws are often not adhered to and can be used as an excuse to not make actual change.

"We do not just want the same access to a clearly broken education system as our cisgender peers."

While some individuals may get help from these pro-transgender laws, it is generally only the most privileged and wealthy of our community who are able to access legal resources to support them through this usage.

Arguing for "equality in law enforcement" is arguing for us to be supporting and funding our oppressors. Some organizations such as the Human Rights Campaign push for simple education measures and incorporating transgender people into the police force. This only increases funding and support for a police system that disproportionately incarcerates transgender people and people of color. In order to truly support all marginalized communities, we must act up against police brutality and militarization through funding and community action. This methodology gets cast aside as "idealistic," ignoring historic victories such as Compton's Cafeteria Riot and Stonewall itself.

"Arguing for 'equality in law enforcement' is arguing for us to be supporting and funding our oppressors. "

Likewise, the militarization of transgender people is a huge concern within our community. Between 2011 and 2013, 10% of all funding to transgender nonprofits in the United States went to military integration, when the community was facing some of its worst years in terms of murders. If this funding were redirected to community organizations, we would have not only been able to decrease victimization but create sustainable jobs for trans people. Arguing for "equal rights" in the military is asking for transgender people to be equally able to murder people in other countries. Trans activist Lily Zheng relates this to her own experience:
"As a trans woman of color, I find it particularly ironic that soon I will be able to serve the same country that brutalizes my black and brown sisters on the streets and in prisons by brutalizing black and brown people elsewhere. I find it more ironic that to the mainstream LGBT movement, this is a victory."

Military inclusion is not a win for the transgender community, it is a cisgender issue and a loss of our intersectional framework. Large, cisgender-run LGBT organizations attempt to operate under a "we're just like you" model to incorporate us into these industries, which is not only inaccurate, but also diminutive to trans culture. We are not "equal" to or "the same" as cisgender people. Like every marginalized community, we have unique needs and identities that equality measures do not take into consideration.

These are only a few of many examples of why pushing for equality is hurting the trans movement. "Equality" is not the end to our momentum. It is a sidetrack that distracts us from embracing our movement's roots and tackling the real issues. Equality will never account for critical self-determination and does not recognize our intersecting identities. We are a movement founded in a goal of collective liberation. Aiming for anything less is a limited idea of our future.