Powerful, wealthy, influential, and worldly, yet out of touch are just a few adjectives many critics use to describe the business leaders and politicians who attend the World Economic Forum's annual meeting in Davos. On January 20, day one of WEF, Pope Francis advised forum members to consider their role in creating poverty and inequality in a text message read for him by a Vatican cardinal. The adage the rich get richer, while the poor get poorer can change. It seems the Pope gets this through and through.

Call it coincidence or a kind twist of fate--the next day an opportunity for the elite WEF invitees to take the kind of social action that would make the Pope proud presented itself. Anti-corruption pioneer and #BringBackOurGirls founder, Obiageli Ezekwesili (also known as Oby), spoke with WEF attendees about her ongoing crusade to bring back the 219 Nigerian girls who have been missing since April 14, 2014, the day 276 of them were kidnapped from school by Boko Haram terrorists. Oby's behemoth mission has a simple message--57 girls are not 276 girls. The girls aren't all back yet. We have work to do.

All The Girls Aren't Back Yet. Now What? 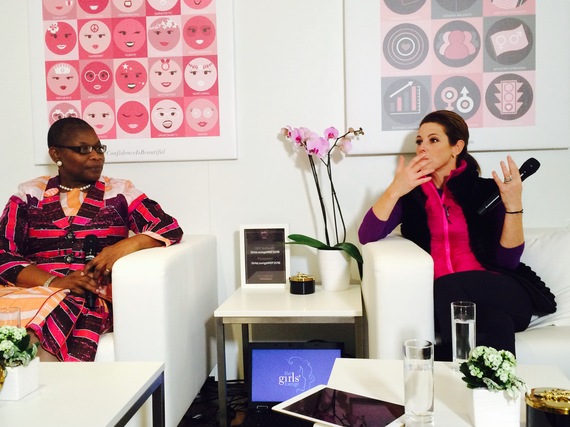 After Oby spoke with people at scheduled WEF sessions, Bloomberg News anchor Stetphanie Ruhle brought her to the Girls' Lounge, where gender equality, empowerment and solidarity pervade. In an impromptu and moving interview, Stephanie and Oby chronicled Oby's journey to find the girls and bring them home to their families. While Oby has been able to use her platform as former Minister of Education to raise awareness about the kidnapping, her quest cannot be reached with just one voice. It may take a village. It may take a government. It may take every fiber of every activists' being. One thing is certain, with all the resources, funds and technology available among the World Economic Forum and other powerful communities, there's no reason Oby's voice should be the only one making any noise on this matter.

For a whole whopping month the juggernaut hashtag #BringBackOurGirls flooded social media. You remember the sign Michelle Obama held in support of the campaign? It was the beginning of an important movement. But like an onslaught of other trending topics on Twitter and Facebook, the #BringBackOurGirls buzz died down quickly. The difference between this hashtag and others is that it's not a trend. It's a global issue, one that can't be ignored.

After Oby's talk, which left a number of people in the audience tearful, the Girls' Lounge founder Shelley Zalis said to Oby, "You're children are our children." If this declaration isn't what Davos needs to ignite action, I don't know what is.

As privileged, first world professionals, we say we want equality. We say we want justice for all. It's very easy to make these statements from where we're sitting, isn't it? In the United States, a campaign like #BringBackOurGirls would never be forgotten by the media or dismissed by the government because such a tragedy would not likely happen there.

While finding the rest of the missing Chibok girls is a tough problem to tackle, there are positives that have resulted from this event. In an article for the Observer, Ken Wiwa wrote that there was something "reassuring" about people caring about school girls being kidnapped in Nigeria. A decade ago, would anyone outside of Nigeria have even blinked an eye at the news? Ken referred to the outpouring of initial support as a turning point in the battle against terrorism. While this is debatable, the incident has shown how powerful digital media is in times of adversity. We just need to keep the conversation going for far longer than a month. That being said, nearly two years after the kidnapping, the right to education in Nigeria has become a heated topic across Africa online and in the streets.

Oby and Stephanie initiated a call to action for the Girls' Lounge, WEF attendees, and anyone who feels moved to organize and #BringBackOurGirls. Technologists, deep thinkers, deep pockets, and influencers are being asked to join Oby in her mission. To engage with the initiative, go to the #BringBackOurGirls Facebook page. Follow Oby on Twitter and join the conversation. Everyone has the ability to bring attention back to these girls and to bring them back home.

As Pope Francis texted earlier this week, "We must never allow the culture of prosperity to deaden us, to make us incapable of feeling compassion at the outcry of the poor, weeping for other people's pain, and sensing the need to help them, as though all this were someone else's responsibility and not our own."

This post was originally published on TheToolbox.org, a tech and social impact initiative co-founded by Peter Gabriel and powered by Humanise, Inc.