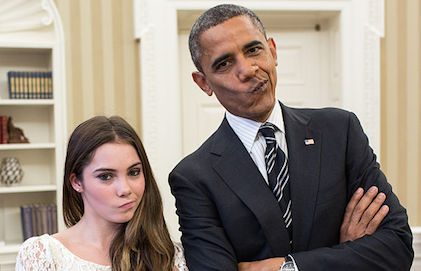 Our favorite part of President Obama's monologue at the White House Correspondents' Dinner on Saturday night was this: "I am determined to make the most of every moment I have left. After the midterm elections, my advisors asked me 'Mr. President, do you have a bucket list?' And I said, "Well, I have something that rhymes with bucket list.' Take executive action on immigration. Bucket. New climate regulations. Bucket. It's the right thing to do."

Which got us thinking: Everyone needs a rhymes-with-bucket list! Because bucket lists themselves can be kind of intimidating. All those things you have to do. Man, it's exhausting. And as the years pass and you fail to check off a single item? That bucket list can start to make you feel like crap when you get out of bed in the morning. It can taunt you a little.

1. Don't have Gisele's body? Bucket! Love the skin you're in, even the bits that have stretch marks and funny-shaped birthmarks. Because confidence is sexier than self-loathing any day of the week. (Related: Can't pull off skinny jeans? Bucket! Remember when boot-cut jeans were trendy and women everywhere gave thanks because pretty much anyone can look good in boot cut? And then the fashion gods decreed that skinny was in -- because, duh, fashion people are skinny. How mean girl is that? We think you should wear them -- and your muffin top -- with pride... or, if you prefer, go full '90s in your boot cuts. Because who cares what cut your jeans are? Like 0.000001% of the population, that's who.)

2. Feel like a woman inside? Bucket! Think like a genderbread person, just like Bruce Jenner did. Because the genitals you were born with do not have to define you.

3. Don't feel like "doing brunch"? Bucket! Because this awesome SNL parody of the Sara Bareilles song "Brave" says so.

4. Can't handle casual sex? Bucket! Just because all the cool kids are doing it, doesn't mean you have to jump on the booty calling bandwagon. If you prefer sex in the content of a long-term, loving, committed relationship, then speak up... and keep your legs closed and/or your pants zipped until you get a response you like. Because we say so!

5. Want to discuss a major plot-spoiling aspect of your favorite TV show on Twitter right now? Bucket! Because discussing things right as they happen is kind of the whole point of Twitter, isn't it? Also because that same SNL parody says so. In fact, it's kind of the national anthem of the rhymes-with-bucket list, in our opinion.

6. Can't keep up with world events in the news? Bucket! Just subscribe to the Daily Skimm. Because we do, and now we don't have to pretend to know what everyone else is talking about.

8. Feel like getting a little kinky tonight? Bucket! Just say something. Because communication is the cornerstone of good sex. And if you never ask, you'll never know whether your partner's up for it.

9. Not in the mood? Bucket! Don't have sex. Just because your sister does it four times a week and Cosmopolitan magazine says you should do it five times a week and your parents are still doing it and TV commercials make it seem like even eating salad dressing gives you an orgasm doesn't mean there's something wrong with you if you don't feel like having sex all the time. Because whether you feel like getting tied up and spanked, or you're more in the mood for some platonic cuddling tonight -- you make your own normal.

10. Want to get married/pay for dinner/ask someone out/get laid/get a raise/stay home with the kids? Bucket! Just ask, already, no matter whether it's supposed to be the man's or woman's job to do so. Because it's 2015, people. Duh.