"How much are you willing to suck?"

This was the response I heard recently when a student asked a master coach how to start his coaching business.

As it turns out, that question is much more relevant than I initially thought.

I'm going to go out on a limb and say that 99% of people feel they're not living up to their potential.

Almost everyone I talk to is not where they want to be. We envision great things for ourselves. We feel that we have much to give and share with the world.

And one of the biggest things that keeps people from stepping off the path of conventional expectations, and onto the path of their dreams, is fear of failure.

I know this fear. I know it well. Following a dream requires getting uncomfortable. It requires stepping into the unknown. It requires showing people a side of ourselves that they might not know--the side that is dissatisfied with the way things are, with a boring job and mediocrity in our days, and yearns for something more. And we have to battle with sneaky demons inside ourselves, such as discovering that deep down we don't think we're worthy of our dreams.

Each of those things could be a post--nay, a book--unto itself. But I want to discuss how the fear of failing holds us back. The fear of sucking. And I want to talk about a few tiny shifts in perspective that can erase that fear.

One of my previous articles for the Huffington Post describes why the Facebook Newsfeed is a false representation of reality. People only really post stuff about their lives that is happy, impressive, or funny. We don't see all the junk in between. 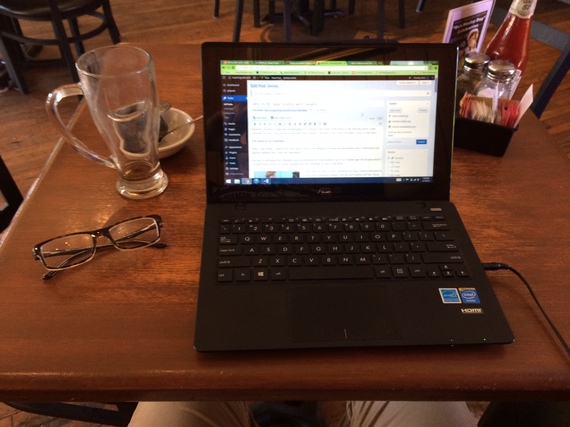 Look, a failure in progress!

Here's an example. You're reading this article that I've worked hard on and polished. What you'll never see is that I sat down to write this article yesterday, and nothing came out. I hit dead ends and mostly backspaced for an hour and then stopped. That was a failure.

But you'll never see that. We don't hear about Thomas Edison's supposed 1000 failures at creating the light bulb because our world isn't littered with light bulbs at a ratio of 1000 nonfunctional ones to 1 functional one. (Can you imagine how much that one would cost?) No. We only see working light bulbs. We only see his success. Which happened 0.1% of the time.

Hemingway said that he'd write 99 pages of crap for every 1 good page he wrote. So 99% of the writing of one of the greatest writers of the 1900s was apparently worthless.

If Picasso held himself to the standard that everything he created had to be a masterpiece, he might have become so discouraged early on that we wouldn't have even gotten the 10 masterpieces he made. We might not even know who Picasso was.

So again I ask you, how much are you willing to suck?

The products that populate the world are people's successes.

If only we could see every failure that led to that success, we'd think of failure and success as inseparable. And we wouldn't think of one as evil and the other as good.

The nature of failure creates the skewed perception that failure is rare. Or that people we admire don't do it. And if we want to emulate the people we admire, we can't fail. Failure then becomes shameful. It takes on a meaning about us: we weren't good enough. We don't belong, we're unlovable, we're flawed.

Well, now that failure has turned to an epic event that means epic things about us, we've pretty much set ourselves up to fail!

(Which is perfectly OK.)

This is why it makes sense to think of failure as a mirage. It looks really real, but it's not quite as real as we think.

Failure is common. It is necessary. Everyone does it. And moreover, anyone who has ever accomplished anything monumental has usually failed at least as big.

When you glimpse the real nature of failure not as something terrible or meaningful about you, it ceases to be so scary. When you see it as part of the continuum of success, the word failure has pretty much lost its meaning.

I mentioned that yesterday I sat down to try to write this article and nothing came out. I actually think that failure directly led to the eventual success of finishing and publishing this article.

When you're hiking a mountain, and you start at the bottom, do you consider each step a failure until you reach the summit? No. You consider them necessary to get you there.

What if you saw the creative process, or the entrepreneurial process, or any process, that way? What if each little failure is a teaching moment that gets you more perfectly primed to achieve the success you're looking for? We could not only accept failure, but see it as a great teacher. It could be a gift.

We then uncover a magical quality called faith that gets us through the darkest of storms.

I still feel like a failure after most coaching sessions I give. Thankfully, I love coaching enough that I just keep doing it anyway. And also thankfully, the clients I speak with usually don't consider the call a failure. I know it's just my overactive imagination.

What's one area where you're willing to fail spectacularly to clear the way for your success?

This article was originally published on jockgilchrist.com.

More:
Businesshealthy livingArtfailurevulnerability
Newsletter Sign Up
The Morning Email
Wake up to the day's most important news.
Successfully Subscribed!
Realness delivered to your inbox