But after the day was over, I felt like I needed to document it in some way. I also started having some thoughts about Father's Day, which is right around the corner. And this is the result: A post-Mother's Day/pre-Father's Day post from my crazy mind.

Mother's Day was spectacular in every way. It started off with me making my amazing wife an omelette for breakfast, and ended with me cooking burgers and brisket for my amazing wife, two sons, all but one of my siblings and my amazing mom. The day was perfect. To have all of those people who are so special to me at the dining room table at the same time just felt so good.

It really was the best Mother's Day celebration -- as low-key as it was -- that I can remember. My wife and mom were both so happy. And they deserved to be happy, because they are both such loving, caring, unselfish people. Without a doubt, they are the two most incredible women I have ever known. 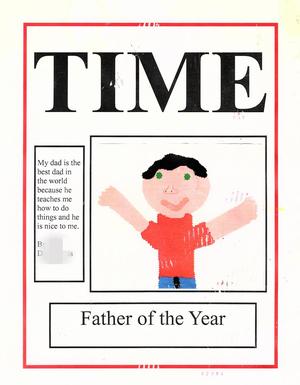 A few days after Mother's Day passed, I started thinking a bit about Father's Day, which is coming up on June 21st. (The longest day of the year. Coincidence? I think not.)

Father's Day has always been an uncomfortable holiday for me. For most of my life, I struggled with it so much because my dad and I didn't have a very good relationship. In fact, for many years, the only relationship we had was the standard biological one. Yes, he was my father. But I never felt the things that a kid should feel about his father: love, respect, gratitude, etc.

That's what happens when your dad's an alcoholic.

I remember countless Father's Days when I wouldn't even want to pick up the phone to call my dad, because saying "Happy Father's Day" to him was just me going through the motions. I got through those calls somehow, but it was not without a lot of anguish.

Then, in February of 2012, my dad passed away, just a few months after he and I reconciled.

This Father's Day will no doubt be the same. I'll be missing my dad and wishing I had just one more Father's Day to spend with him so I could give him a hug and tell him I love him -- and actually mean it.

Father's Day is also a stressor for me because I constantly struggle with a question I ask myself almost every single day: Have I been a good father to my boys?

Because of the relationship I had -- or didn't have -- with my dad while I was growing up, I would constantly tell myself that the one thing I was bound and determined to do in my lifetime, more than anything else, was to be a better father to my kids than my father was to me. Not just a better father, but a damn good father. Someone my kids would look up to and aspire to be like.

Given the fact that my father was an alcoholic/workaholic who put his whiskey and business ahead of everything else in his life, you'd think that meeting that goal I set for myself would be a slam dunk. I mean, how could I not be a better father? I should be able to do that blindfolded, with both hands tied behind my back. And how hard could it be to be a damn good father? Love your kids, say and do the right things, set good examples, teach your boys to be good men, etc. It all sounds so simple.

But you know what? It's not. And I'm not sure I've succeeded.

This really hit me hard over the last 36 hours or so. Yesterday, I had an email conversation with a younger friend -- and by younger, I mean I'm old enough to be her father -- and she said something that should have been very flattering to me. She said: "You are so awesome. Seriously. You're like the dad I always wanted!!!"

Wow. What a great compliment, right?

Except that the night before, something happened between me and my younger son that made me feel like I was anything but a good father, let alone the type of dad someone would actually want.

Over the years, my family has gone through some difficult situations, and we've all said and done things that we didn't really mean or ended up regretting. In life, when we're angry, we sometimes do some inexplicable things. But when I replay certain events in my mind, I feel like I've done way more than my fair share of these things. I've said things -- hurtful things -- to my boys in anger that I could never have imagined saying. Things that my dad, as shitty as he was for so many years, never said to me.

So, I have to ask myself whether or not I am a good father.

Yes, my boys regularly tell me that they love me. And, over the years, both of them have also told me, on more than one occasion, that they hate me. (That's what teenagers do, right? RIGHT???!) But I often wonder how they really feel, deep down inside. I guess I think this way because I know that I put up a facade with my dad for all those years. I said one thing, but I felt another. It was just the easiest thing to do.

Nobody ever knows exactly how another person feels. That superpower does not exist. At least not on this planet. People tell us things and we have to take them at their word, because that's all we have to go by. If you spend your time second-guessing what someone says, you'll drive yourself crazy; which is exactly what I've been doing to myself lately.

Someone I work with in my addiction/recovery advocacy work said something during a conference call a few months ago that I thought was brilliant. It was said in the context of parents dealing with an addicted child, but I think it applies to pretty much every aspect of life: "You do the best that you can with what you know at the time. You learn as you go along, and you try to do better. And you can never go wrong with love."

As parents, I think we're constantly learning. After all, parenting is one of the most challenging things in life. So I will continue to learn as I go along, and I will most definitely try to do better. Because no matter how good you are -- or think you are -- there's always room for improvement.

Most importantly, though, I will continue to throw an abundance of love in my boys' direction. Because I love them more than life itself.

When Father's Day arrives, I will no doubt sit and ponder about all this stuff yet again. But until then, I'll try to clear my head and not be so hard on myself.

"One of the worst things about being a parent, for me, is the self-discovery, the being face to face with one's secret insanity and brokenness and rage." --Anne Lamott