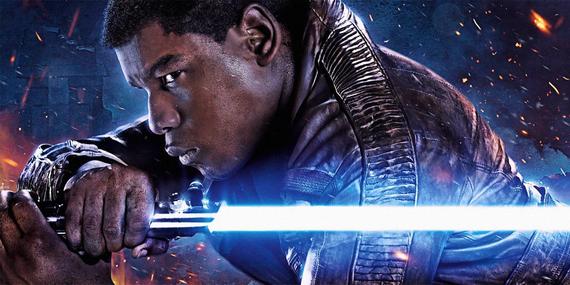 Last year, Star Wars, the most popular sci-fi franchise in the history of the film industry starred a black male lead actor. To date, Star Wars: The Force Awakens has made 1.948 billion dollars in revenue. In a world where the fight for representation in all forms of media and mediums of entertainment is a real one, this a battle won.

John Boyega's character Finn is not only a focal point of the film's plot, but he is the catalyst. Every event that occurs The Force Awakens happens because of the decision a Black Storm Trooper, on sanitation duty, makes to take a risk, and escape the circumstances that have been chosen for him from birth. He is the engine that makes this movie go.

More importantly, he is one of only two main characters that represent the extremely necessary point of view of the everyman, which are lost in the other players whose destinies are tied to the big, picturesque journey in the balance of The Force. Finn, like Han Solo before him, picks up this responsibility by choice, due to the highest form of human compassion and empathy, agape love. This humanity is central to Finn's character and makes him not only the most relatable, indentifiable person in the film, but the most courageous.

Many arguments have been made that John Boyega was a casting choice made out of some sort of subterfuge to pacify our calls for diversity in film, while rendering his character an irrelavent factor in the story -- that his character is the antithesis of a hero. I would suggest the opposite. A talented, young Black actor was cast to play the first completely unique character that has existed in the Star Wars franchise since its original iteration.

Desert planet? Absent parents? Low sense of self worth? A yearn for escape into the grand expanse of the universe and the adventures that lie within it? These are all themes we have seen before. But never have we seen a Storm Trooper, helmet off, defect from a galactic army into which they've been drafted from birth to become a reluctant hero in a power struggle that determines the fate of all forms of existent life.

Finn's character wants what every man, woman, boy, or girl does-- to be safe, to be happy, to live life on his own terms. It's because of these things, and his fear, that his commitment to acts of heroism for the sake of the people he grows to care about that makes his heroics matter. His motivation does not directly tie to any ulterior agenda. Rey is drawn by her connection to The Force. Han wants to find his friend and save his son. Chewbacca goes where Han goes. Poe is character that has dreamt of fighting for the resistance his entire life. Finn has none of these personal obligations and decides to go anyway.

It's no secret that John Boyega's presence in the Star Wars universe was met with derision to begin with. A galaxy far, far away can't even escape the reach of poisonous, racist ideologists. By ascribing to the idea that John Boyega is a politically correct casting whose character is another attempt to belittle or minimize the impact that Black people are allowed to make in Hollywood, it not only erases the victory for our people in this representation war, but also diminishes the importance of a new, essential character in this universe that many of us love and cherish. John Boyega as Finn is the lifeblood of Star Wars: The Force Awakens, and as long as he and his character continue to develop during the next installments in the franchise, there is a soldier on the front lines winning battles for the right side of history. 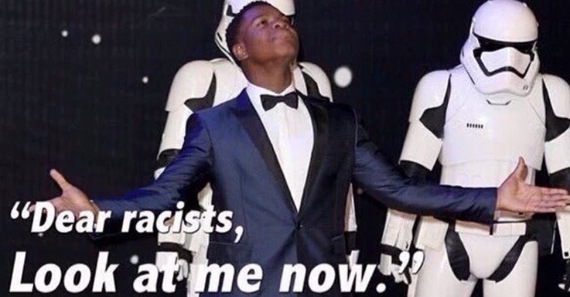