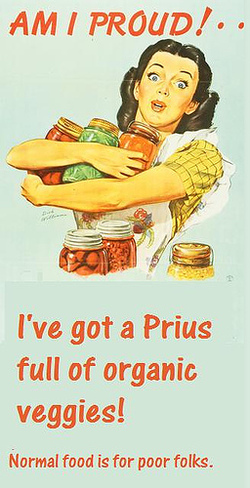 Life used to be so easy. You ate to live. Then, man discovered fire and realized mastodon tastes a lot better with a nice sear on it. Around 500,000 years later, Homo foodieus evolved, and now it's impossible to go out to eat without camera flashes going off at the tables around you.

Mercifully, a nascent Foodie Backlash has been taking root in America, and I feel the time is ripe (Did you see how I tossed two food puns into that sentence? Annoying, isn't it?) for me to go increasingly public with my loathing for this odious word and the obnoxious behavior that too often accompanies it. I've elected to publish this article now (an updated version of a 2011 piece I did for Gadling), because I can think of no other season in which foodies get so worked up.

I realize I'm setting myself up here. I'm a food journalist. Don't I perpetuate all of this silliness, getting readers in a lather over the Next Big Food Thing? Don't I eat at nice restaurants and drink expensive wine? Well, yes. And, no (and to that latter hypothetical question, less often that you'd think in this economy).

I like to think that through (most of) my work, I promote importance of understanding where food comes from, and urging localized food security. I'm concerned about protecting the environment, public health, and genetic diversity in plants and livestock; conserving natural resources, and finding more humane ways to raise and slaughter livestock.

Does that make me the culinary equivalent of Mother Theresa, or absolve me of my written transgressions that are less pure/more fluffy in intent? Of course not. I can be a hedonist, too. My bordering-on-obsessive hatred of "foodie" is really about the culture it's perpetuating. That said, the word itself is infantile, idiotic, and meaningless, and makes me want to poke my eyes out with a larding needle. Can't people just say they love food?

My biggest issue with foodie as a concept is that it's detrimental to the remarkable, burgeoning food culture we've finally achieved in the United States. In a mere 100 years, we went from agrarian society to culinary wasteland to possessing identifiable food regions. We established a world-class artisan food, sustainable agriculture, and fine dining scene in certain parts of the country.

What went wrong? We paid $200 (for a bottle of estate olive oil), and instead of passing "Go," we became a cult of food elitists. It's the antithesis of why many of us got into the food business in the first place. Yes, care about what you eat, but food shouldn't have a sense of entitlement attached to it.

Do you really need to be on a first name basis with the person who sells you fava beans? It's a wonderful thing to develop a relationship with local growers, but the posturing and farmer name-dropping one-upmanship I've witnessed in over a decade of working at farmers' markets is over the top. Real supporters of sustainable agriculture -- of real food -- also don't go trolling for discounts or freebies, because they understand just how hard farmers work for a living.

In a perfect world, everyone should have access to fresh, nutritious, locally-grown, delicious food, especially children. Thanks to the good work of organizations like Wholesome Wave, the Chez Panisse Foundation, and an ever-increasing number of other school lunch programs, community gardens, and food security initiatives nationwide, this isn't an impossible goal for Americans to achieve, nor is tackling our obesity epidemic in a one-two punch.

I'm not saying it's wrong to spend disposable income, if you have it, on costly ingredients or dining out. But the fetishizing of food, the pissing contest that is the hallmark of the archetypal foodie is what I cannot abide. This is what's at the heart of foodieism; the need to belong to a special club, with a language all its own. In our status-obsessed society, we need to separate ourselves from the plebes who think that the Olive Garden is serving "Italian" food.

Eating well (not necessarily synonymous with eating "expensively") is one of the greatest pleasures in life, and cooking for other people and joining them at the table sustains us in ways that go beyond filling our stomachs. Every food lover (see? doesn't sound so bad, does it?) has a deep, fundamental reason for why they're so moved by the act of eating.

For me, it's the cultural aspects of food, its intrinsic relationship to travel, as well as the people who grow, forage, raise, catch, and make food on a small, sustainable scale that I find captivating. These are things that I was fortunate enough to experience in childhood, and they made an indelible impression on me, as well as fostered my culinary career.

Good food -- be it a ripe peach, a great street taco, or a lavish, multi-course meal -- brings me joy. For what it's worth, my parents aren't "food people." I grew up on a ranch, but I also ate a lot of frozen vegetables and TV dinners, because my mom had two kids to raise, dislikes cooking, and for her, the '70's with its advent of guiltless convenience foods was a godsend.

I'm also bothered by the bad manners perpetuated by foodie culture. On what planet is it okay to "just pop into the kitchen" during a packed dinner service to talk to the chef... especially when s/he's a total stranger? Yet a former boyfriend and I witnessed such a scenario, while dining at a certain famous restaurant.

After three hours of listening to the ten-top beside us discourse on the merits of Brittany sea salt purchased at the source versus approximately 12 other kinds of hand-harvested salt, we were ready to clobber them. Look, if you want to spend your money on that crap and then have a debate about it, that's your prerogative. Just don't hold a small, intimate restaurant as captive audience. Few things are more deadly boring than foodies in a feeding frenzy.

Foodies should also remember that while home cooking, traveling, and dining out most certainly give you an education about food, they don't, in most cases, make you an expert. Yelp serves a purpose, to be sure, but it's often a means of settling a score or self-promoting. Or, in the case of food blog reviews written by foodies (as opposed to, say, writers with actual journalism as well as culinary credentials) a way to say, "I'm a food writer too!" One food blogger I stumbled across while initially researching this story had written on a recent post, "I think [foodie] is a very serious title. It's like calling yourself a writer or an artist. It means you have to have the knowledge, talent and experience to back it up."

Um, please get over yourself. Knowing about food, winning a Pulitzer, being the greatest chef on earth... at the end of the day, it's just effing food. Not the cure for cancer or achieving world peace.

I think esteemed food writer and author Amanda Hesser said it best when she was quoted in a Chicago Tribune article a couple of years back:

"'Having more people interested in good food is never a bad thing,' said food writer Amanda Hesser, who recently assembled The Essential New York Times Cookbook. But what she can't stand, she said, is eating dinner with people who 'only want to talk about food and every place where they ate, like, doughnuts or something, and where the best doughnuts are secretly found. Knowing a lot about food culture is a good thing. That cataloguing of food experience is becoming tiresome. I'm pro-food experts. I'm just not so sure I want to have dinner with them or have them judge me on the coffee I drink.'"