I sip wine in Paris. I am celebrating.

1) Because I am in Paris.
2) It is almost my birthday (I believe in extended celebration.)
3) My humongous personal leap.

Hurrah! Hooray! Here is a story where I do not have to grapple with the arc of a character. I am a certified expert on my own grand and small (at times oh so subtle) ascending and descending (occasionally plummeting) arcs. Since my last stay in Paris, the ascending arc of my character is off the charts. I have been transformed from a woman who was intimidated by scarves to a woman with scarf-cred -- a woman who attracts scarves.

The seeds of my startling evolvement were sown last year, when a scarf seduced me on a Paris sidewalk (see details in the archived "Why French Women Wear Scarves"), a scarf that garners compliments regardless of zip code or time zone; a scarf with blurbs.

"Oh my god your scarf! It takes me back to Paris with Bob." -- My friend, Kelly, in her Los Angeles kitchen.

"I want that scarf so much I hate you." -- NYC Woman at French Roast café.

I did not return to Paris with the intention of alerting women to my scarf-piece. But, apparently, this is what I am doing. I have yet to meet the French woman who is not eager to read "Why French Women Wear Scarves." Except for the playwright seated beside me on the terrace of Café Daguerre.

"I know why I wear scarves..." the stylish septuagenarian says, her French accent as thick as the lait chaude chocolat she is drinking. "I do not like my neck." She fusses with her three-toned green silk scarf, adjusting it to just below her chin.

I gaze beyond the playwright at the cheese, fruit, vegetable and fish stands along cobblestoned rue Daguerre, thinking: If I buy a wedge of goat cheese, now, I'll have to take it back to the apartment...and what I really want to do is walk to Saint-Germain, stroll down rue Dauphine to Pont Neuf.

"How is your neck?" the playwright says.

She can not see my neck because I am debuting a scarf. A hot French saleswoman persuaded me to buy it (plus a snazzy dress) with her exuberant promise: "When you wear that dress in L.A. with that scarf...you will be 'look at me I am sexy--I have been to Paris.'" The scarf is red/orange, a color perfectly suited for a geranium. It looked great with the dress in the mirror of the boutique. But without the dress, well...the scarf is just not up to my standards. This is part of my humungous personal leap: I have scarf standards!

"You are lucky to have a good neck," the playwright says. "Enjoy it while you can."

I am in a tiny boutique on rue Dauphine, developing a relationship with a girly swirl of burgundy and white. I have tried on three scarves (the sudden sight of so many colorful, silk scarves, housed in one miniscule shop, diverted my purposeful strut toward Pont Neuf.) But this scarf I place around my neck for the second time. The Asian proprietress has red Betty Boop lips on a pale, smooth face; she is into my decision process.

"Transparent," Madame Boop Lips says with a French accent that deserves to be surrounded by colorful silk.

"Oui...like lace. The one you are wearing is most romantic," she says. "Comme ca..." She removes the scarf, unfolds it, then drapes it around my shoulders like a shawl. "Transparent," she says, again, gesturing to my skin, discreetly visible through the sheer silk. "Tres romantique."

I tear a page from my L'Agenda Moderne notebook and write: "Why French Women Wear Scarves"... huffingtonpost.com.

"Huffington Post?" she says, tentatively, the words too bulky for her dainty mouth.

"Google," she says. Madame Boop Lips understands 'Google.' Everyone does.

I sip Campari outside Café des Beaux Arts, gazing beyond the locked bouqanistes as a bateau mouche emerges from beneath the Pont des Arts, illuminating the Seine and my reverie.

"Oh no...no!" My dreaminess is compromised. An American woman is yelling at a thief--a canine thief. A yellow lab, beneath the next table, clenches his drooling jaw around a thin, rectangular package wrapped in butcher paper. A man and woman, seated at the table, laugh, speaking jovially in French, as they rescue the package from the pooch's determined grip.

"He stole it right from my purse," the American woman says to the man as he hands her the package. "Sliced ham," she says, scrutinizing the wrapping.

The French couple and the four-legged thief are leaving. I notice the color of the woman's scarf: a subdued violet, similar to the blouse that I am wearing (purchased yesterday.) "J'aime cette coleur," I say.

She removes her scarf and--hands it to me. "Une cadeau," she says.

Talk about the kindness of strangers. I gush my appreciation (in French); and suggest that she read "Why French Women Wear Scarves."

We laugh. I place the purple scarf around my neck with a flourish, thank her, again, as she heads up rue Bonaparte with her dog and her man.

At a nearby table, three Frenchwomen are all wearing scarves. I speak, excitedly: "The woman who just left with her dog...she gave me this scarf--took it from her neck, and gave it to me." This I say in broken-French as if I had just encountered a space alien.

The three women ponder the phenomenon. The woman in pink says: "Was she French?"

I sip late-morning-espresso outside my favorite neighborhood café with Corinne, my new French friend. Smart, lively, and chic, Corinne speaks English in a musical tone that lends each word a sound prettier than its meaning: "I read your scarf piece," she says. "C'est vrai. It is true what you write. I love it." She lowers her voice and confesses: "I own fifty-five scarves."

"You can own many scarves," Corinne says. "For different occasions."

I tell Corinne about my gift from the Hungarian woman.

"Fantastique," Corrine says. "I must go now, but I will be back in ten minutes for a business appointment." She steps from patio to sidewalk as I order another espresso.

By the time the espresso arrives, Corinne is back (her apartment is around the corner). Like a magician turning a rabbit into silk...she pulls a scarf from her purse: a gorgeous, iridescent blend of lavender and blue, tinged with pink and red, trimmed with red fringe.

Wait. This can't be for me. She must be showing me her scarf because it is one of her favorites...maybe 'the' favorite of her fifty-five scarves.

There is a glint of mischief in her eyes as she says with a sly smile: "French women can give gifts, too!"

I have been wearing Corrine's scarf since she gave it to me this morning. It is close to midnight at Café de Flores and I am wondering if the man in the red leather booth is the writer that I met here, last year. Angst-ridden-handsome, his black hair streaked with grey, he looks as if he just came in from the wind, although the air is still, tonight.

I tell him: he resembles a writer that I met upstairs in the café.

"Your scarf makes you look very French," he says.

I swear he said that. And I am delighted. "I love this scarf," I say.

"But I have a secret identity," he says. "I am a classical pianist."

He asks what kind of writing; what kind of singing? My abbreviated answer includes: my novel, a new album that I am recording, and my HuffPo scarf-piece. We talk about the significance of music in our lives. He says that he could not continue to report about war--because he needs to make music. He drinks water, looks over his glass at me. "Your scarf does make you look very French."

"A gift," I say. "Two women gave me their own scarves--including the one that I am wearing."

"Here in Paris? This is exceptional. This is rare," he says. "This is your next story." The war correspondent with the secret identity writes down his phone number and email address, slides it across the table. "We will see each other, again," he says.

I stroll toward the Metro. The moon, round as a plump wheel of brie, looks down at me. Maybe I've had too much wine or maybe it's the intoxication of Paris, but I am wondering if the moon is admiring my scarf.

I hurry down the stairs of the Metro. 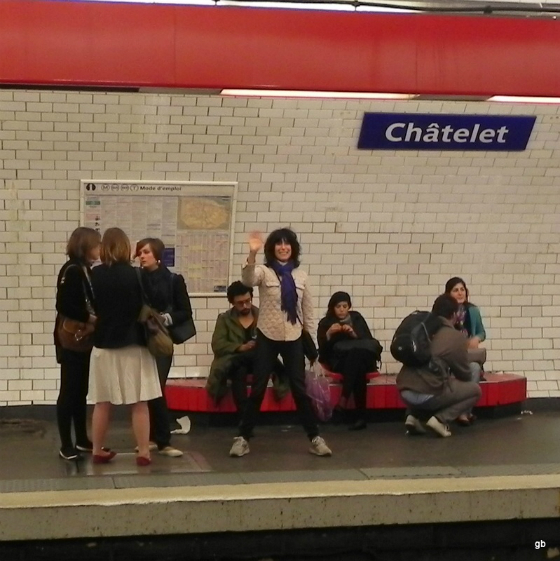