I always assume people know why I started FCancer, but in reality the name does not tell the story. So here it is.

Two years ago my Mom had her routine annual mammogram, and thank God she did -- she was diagnosed with breast cancer a few weeks after that routine exam.

After we got the diagnosis (which in itself was a process) I became a woman possessed. I handled Mom's treatment and care. I was on a mission to make this as easy as possible for her; I ate, slept, and breathed research for weeks. I read everything I could get my hands on: books, blogs, papers. I busied myself making arrangements for the upcoming surgery all day every day, but at night when no one was around to distract me and there were no more arrangements to be made for the day -- that was when I fell apart.

The one person I share everything with is my big brother Ryan, and this was no exception. Ryan lives in London, I live in Vancouver. I would call him at all hours. Sometimes there were no words, just sobs. Ryan was the only person who ever heard me cry throughout the cancer. I think the only reason I was able to hold it together was because I could fall apart late at night and Ryan would piece me back together, over the phone. Thank you, big brother.

The big day came soon enough: April 8, 2009 will be forever etched in my memory. Despite the early 5 a.m. alarm, I am already awake. I know Dad is too. Mom doesn't want to wake up -- sleeping is one of her coping mechanisms. Today is the day we have been waiting for and dreading simultaneously. Today cancer takes its payment, in the form of a bilateral full mastectomy. Mom will lose her breasts but keep her life, so we can't complain -- can we? 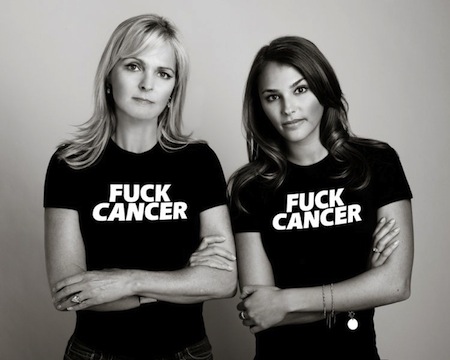 We wake Mom gently, we are already dressed. On the car ride to the hospital Mom drifts in and out of sleep, she tells me the first thing I must do when she comes out of surgery is wash her face and put her cream on. She gives me instructions on how to do so. "Don't pull the skin," she says. I smile and nod, it stings inside that she knows she won't be able to do this herself.

The next eight hours made up the longest day of my life, but oddly, I still can't remember how I filled the time. With the procedure finished (and successful!), we headed home, but things were different. Mom couldn't do most daily activities because she couldn't move her arms properly. We had to move things from shelves onto the counter so that she could use them if we weren't around. But we caught her cancer early, so we were told we got lucky, and I really do feel like we did. Even though as a family we had one terrible year, we have many more amazing years together, and that's why I feel lucky.

Why share this? Because this is what triggered FCancer's creation. The movement started from my head in my hands, defeated and defiant, wanting to support my mom. I decided I would do something to teach people how to look for cancer instead of just find it, because early detection really was our salvation. It has been almost two years since mom was diagnosed, and my life is now completely different.

So now you know.