Do you remember back in middle school when you could find out whether or not you were gay by comparing the size of your ring and index fingers? Gay-Check-Online.com is essentially the digit ratio game for the 21st century. The website claims to be able to discern your (homo)sexuality with just a quick scan of your face. The first time I scanned, the website declared: "Congratulations! You are gay!" It's true. I am indeed a disciple of Sappho. But how did it know? I didn't even have my nose stud on! 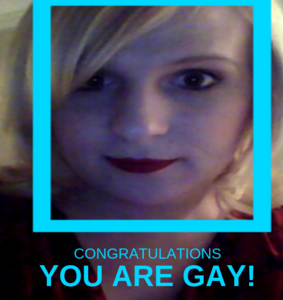 I decided to run some tests to see how it worked. I refreshed the page and held up a picture of Rush Limbaugh this time.

"Congratulations! You are gay!"

"Congratulations! You are gay!"

You guessed it. Gay.

Turns out, Gay Check Online only has one result; in the immortal words of Arrested Development's Tony Wonder: "Now everybody's gay!" Kim Asendorf and Ole Fach, the creators of Gay Check Online, say that the website is intended to parody a couple of recent scientific studies suggesting that gay men and straight men have different face shapes.

While I would normally support any website that played me dance music while congratulating me on being a lesbian, there's something about Gay Check Online that doesn't sit right with me. Although the website is intending to lampoon the scientific need to locate visible, morphological markers of difference, the experience of being examined in this way evokes scientific racism of all sorts, from phrenological justifications for slavery to Nazi theories of racial differences in face shape. Asendorf and Fach are aware of this association, observing in an interview that the study of facial differences between gay and straight men "reminds us a little of some Nazi studies."

I agree with Asendorf and Fach, of course, that the scientific study of gay men's faces is worthy of derision but using the spectre of Nazism to make that point strikes me as heavy-handed at best and appropriative at worst. These days, studying the shape of gay men's noses is an endeavour that can be dismissed with a simple wave of the hand. You don't need to invoke a racist theory of facial shape that helped justify the deaths of millions of people. That's like pulling the fire alarm when someone burns popcorn. No one is going to take these studies seriously anyway.

In this respect, Gay Check Online reminds me of Brenda Romero's board game Train which is occasionally available for play at shows and exhibitions. Train tasks players with fitting yellow pegs into train cars. At the end of the game, it is revealed that the train's destination is Auschwitz and each yellow peg represents one hundred thousand Jews. At this point, players are made to feel responsible for their deaths. The game is, in effect, a Holocaust simulator, albeit one that clearly condemns the Holocaust and the type of obedience that led to it.

Although Gay Check Online and Train are both well-intentioned critiques, I firmly believe that some forms of violence are so insidiously evil that they should never be simulated or replicated in any way, even to condemn that very violence. We can thoroughly repudiate Nazism, scientific racism and the "science" of homosexuality without undergoing eerie facial examinations or pretending to be Heinrich Himmler. Those logics don't need to be experienced firsthand for us to know that they are abhorrent and vile. I don't need to hold a gun in order to know that I should never use one.

What I find objectionable, then, is not the moral stance of Gay Check Online and Train but the contrived way in which they communicate that stance. After you experience Gay Check Online, Asendorf and Fach's interview on the game reveals that they intentionally wanted you to experience something approximating the scrutiny of a Nazi facial examination. And, after a period of playing Train, the gamemaster discloses that you have been simulating the transportation of Jews. Gay Check Online and Train both make great points but they stubbornly cling to and insist on the necessity of their own gimmicks in a way that feels, frankly, disrespectful of the weighty histories they invoke.

Both experiences highlight unspeakable forms of evil that should be condemned vehemently and repeatedly. But if you're going to put players in the shoes of Nazis and Jews to make a point, you better be damn sure there isn't any other way you can make that point. I don't think that simulating a central tenet of Nazi racial theory is "a fun way to deal with the topic," as Asendorf and Fach claim in their interview. And I don't think that playing a board game is necessarily a more powerful way to understand the horrors of the Holocaust than, say, reading a book or watching a documentary. Interactive experiences are unique, yes, but I trust in the human capacity to understand moral complicity without needing to play a game.

So I won't be visiting Gay Check Online again, as innocuous as it seems. It just feels a little too close to an eerie practice that I'd rather leave in the past. If I need to feel great about being gay while listening to music, I'll go dance at The Dark Lady in Providence, Rhode Island. And if I need to be extra sure I'm gay, I can just look down at my ring and index fingers and see... a wedding ring from my wife. What do you know? It works after all.