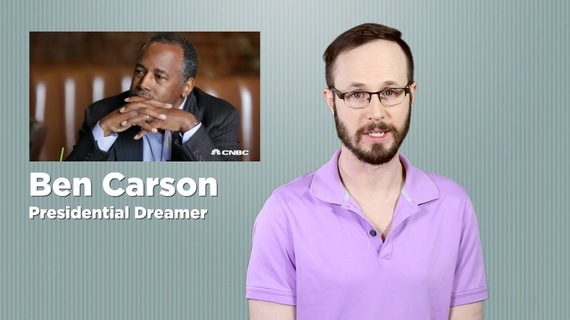 If we let gays get married, is polygamy next?

Well, no, obviously, but this is an argument that comes up over and over; and it just happened again. This time, it was from Ben Carson, who's running for (and has no chance of becoming) President. He hinted to CNBC that "other groups" would deserve marriage if gay couples gained the freedom to marry.

When pressed on what those other groups were, he eventually admitted that they might include bigamists.

This is a suggestion that comes up a lot, even from the Supreme Court. Last mont, Justice Alito observed, "a group consisting of two men and two women apply for a marriage license. Would there be any ground for denying them a license?"

Yes, there would, although the reason might not be immediately obvious.

Here's why: From a legal perspective, marriage is a contract, and gender doesn't change what the contract does. In states that have legalized marriage for gays and lesbians, the only change in those contracts was the genders. A few pronouns were switched, but when gay couples marry, everything else still works exactly the same way.

But for marriage contracts to cover multiple partners, a lot more would have to change. If there's a divorce, who gets custody of whose child? Who gets to make medical decisions for who? Are there limits on employer benefits for spouses? Can everyone immigrate together? If someone dies without a will, who's next of kin?

For marriage to start covering multiple partners, you can't just switch some pronouns. The whole contract would have to be re-written from the ground up.

So that's why marriage for gays doesn't lead to polygamy.

It also doesn't lead to marrying children, or animals, or inanimate objects. Remember, marriage is a contract. And if one of the parties doesn't agree to it, or isn't capable of agreeing, well then it's not an agreement. It's not a marriage.

But I that Ben knows that. And that he, a neurosurgeon, is capable of telling the difference between two men who want to commit to spending the rest of their lives together and, say, two dogs who look cute in costumes.

So I'm not even sure what Ben Carson's trying to say at this point. Is he seriously running for president, or just getting gullible donors to pay for him to audition for Fox News?