This might seem obvious, but in fact, gay marriage is compared to abortion a lot.

People lump gay marriage in the same polarizing issue category as abortion and gun control all the time. It's one of the issues, it seems, that defines someone as a liberal or conservative, from a Red state or a Blue one.

For example, the Washington Post said in a headline in 2004 that gay marriage is "the new abortion."

And often, legal experts or other talking heads will predict the outcome of a Supreme Court gay marriage battle by looking at Roe v. Wade. That decision was a disaster, they say, because the Court's opinion protecting the right to an abortion was far ahead of public opinion. The country was heading toward making abortion legal anyway, the theory goes, until the Court made a big deal about it and caused a backlash that we're still suffering from.

That's what a lot of people worry will happen as the Prop 8 advances -- lower courts will overturn Prop 8, but the court that matters -- the Supreme Court -- will think about Roe v. Wade and uphold it.

But gay marriage is not abortion. 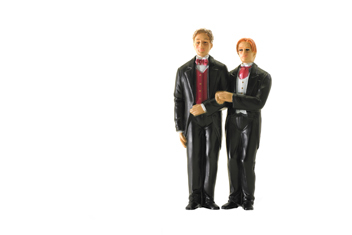 In a New Yorker article on the Proposition 8 trial Perry v. Schwarzenegger, which is currently being argued, Margaret Talbot writes that researchers who "have studied public opinion on gay rights, believe that in five years a majority of Americans will favor same-sex marriage -- the result of generational replacement and what [one researcher] calls 'attitude adjustment.'"

She goes on to say, "The generational divide does not produce such results for all social issues. On abortion, for instance, younger Americans tend to be less supportive of unfettered rights. Nor does gay marriage seem to be a life-cycle issue -- one that people become more conservative about as they age."

Also, when people change their minds about gay marriage, they tend to do it in only one direction, she says - become approving. Abortion can change minds either way.

Why is this? Because intuitively, people understand that abortion (or gun control) is fundamentally different from gay marriage.

People who want an abortion or want to own a gun (or who don't want to wear a seatbelt or get their kid immunized) are people who want to make a personal choice without government interference or regulation.

In a world without a government, they would be able to make these choices unhindered.

Also, they apply to everyone equally. Either every woman can get an abortion or no one can.
Gays and lesbians who want to get married are simply asking to be regulated in the same way as straight couples. We are asking that the laws apply equally to us.

Yes, we can opt out of the system all together. We can get married in a church without the state's involvement or not marry at all, but live together as a couple. That would be a private choice, and that is the sort of choice already addressed by the overturning of sodomy laws by the Supreme Court in Lawrence v. Texas.

But what gays and lesbians want is for the law to apply to us. We want to be regulated in the same way as anyone else. We want the state to sanction our unions. We want to abide by the state's tax laws for couples.

The reason that people (even conservative people, like Dick Cheney) move toward acceptance of gay marriage is because eventually they recognize that the issue is not a moral question -- as abortion is -- but instead is about a fundamental issue of fairness.

Gay marriage is not abortion. Let's not predict failure in the Supreme Court -- or anywhere -- just because we think it is.

Jennifer Vanasco is an award-winning, syndicated columnist. Follow her at http://www.Twitter.com/JenniferVanasco. Email her at jennifer.vanasco@gmail.com