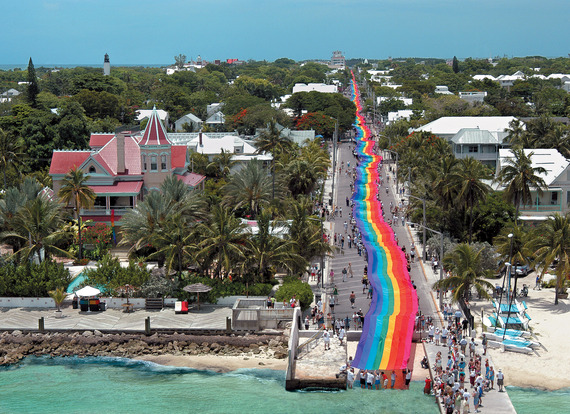 Key West, Florida is a destination popular with gay and straight travelers.

During the recent New York Travel Festival, a travel conference and expo that takes place every year in New York City, I was invited to make two presentations: one for consumers and one for travel industry insiders. In the consumer presentation, titled "Why Gay Travel is Great for Straight People," I highlighted why gay travel experiences can enrich trips for straight people too. Here is an excerpt from the presentation (you can also watch the video, which is a bit more detailed).

Society is more integrated than ever. Gay people are more openly participating in so-called "mainstream" culture. And straight travelers have changed too. Heterosexual people are checking into gay-owned bed-and-breakfast hotels. They're having drinks at gay bars and joining gay tours and pride celebrations.

But why is gay travel great for straight people too?

The reasons why straight people are getting into gay travel are many. The most basic reasons tie in with why people love any kind of travel -- it's fun, it's exciting, it's a chance to discover new things in the world.

Here are five more reasons why gay travel is great for straight people:

1. Gay travel is fun, and it's comfortable.

My friend Tammy is a straight woman who's been on some rather gay vacations with her gay male friends in Provincetown, one of the most popular summer destinations for gay travelers in the northeast. When Tammy went there, she spent most of her time in gay venues, on the gay beach and with gay people, and she had a great time.

• One, she has gay friends. And she wants them to feel comfortable and safe.

• She likes the ambiance. She likes feeling comfortable as well, and being around open-minded people.

• She also likes the idea of going out dancing and just having fun, without worrying about getting hit on by guys when she just wants to be with her friends.

2. Gay travel can provide a quality experience, away from the usual touristy stuff.

My sister and her husband -- who are both in their 60s -- made the choice to stay at a gay-owned bed-and-breakfast on their upcoming trip to Scotland. They say it's for several reasons:

• The place got great reviews online. Whether gay or straight, always research before you decide!

• They're looking forward to getting travel advice from hotel staff about tours, dining and shopping that goes beyond the typical, mainstream touristy stuff.

Richard Gray, who's the LGBT director for the Greater Fort Lauderdale Convention & Visitors Bureau, described why some straight people love to experience the gay angle when they travel. "I think we [gay people] tend to go to fun, edgy places," he said. "There are a lot of straight people who go to a gay destination because they know what we like. They know we like good restaurants and good shopping and good nightlife. It's also about integration -- we're becoming more integrated."

3. Gay travel allows you to support the causes you care about.

Another reason to think gay is equality. Most people want equality nowadays, right? And we like to support businesses that support that. So when you see a giant travel company like American Airlines -- which not only targets gay travelers, but also talks about its equal treatment for LGBT employees -- you know you're patronizing companies that support causes that YOU support.

Yes, you can even save money when you patronize gay and gay-friendly businesses. An example: Rental car companies such as Budget, Avis & Enterprise allow you to add a spouse or domestic partner for free as a driver, when you rent in the United States. The domestic partner option was introduced to recognize same-sex couples, but it can work for any unmarried couple.

By expanding your radar to include gay-owned and gay-friendly businesses like hotels and bed and breakfasts, you also expand your options and the possibilities for getting a great trip for the best possible price.

5. It's safe -- and it can be a great alternative to boring business travel, too.

For number five, I got some interesting feedback from Bill Boeddiker, the owner of a beautiful bed-and-breakfast called Parker Guest House in San Francisco's Castro district. He welcomes a lot of straight travelers -- and he says they fall into three main categories:

• Interestingly, he said the third group is made up of women traveling alone on business. He says that female business travelers "seem to like the secure, personal feeling that our property offers."

In many ways, the 17-year history of the Parker Guest House reflects the evolution of gay travel. Not only are more straight people thinking gay when they travel, but more gay people are feeling comfortable and safe in a mixed environment as well. Boedikker says that in the 1990s, his hotel was nearly 100 percent gay, and he'd actually get complaints from guests if a heterosexual person was staying there. Gay people needed a feeling of security and privacy.

But now, he says that the hotel is around 40 percent straight, and he hasn't had a single complaint about the mix of travelers from either side.

Indeed, the lines are blurring between gay and mainstream travel. In my next post, I'll highlight three ways that you can add some gay flair to your next vacation experience.