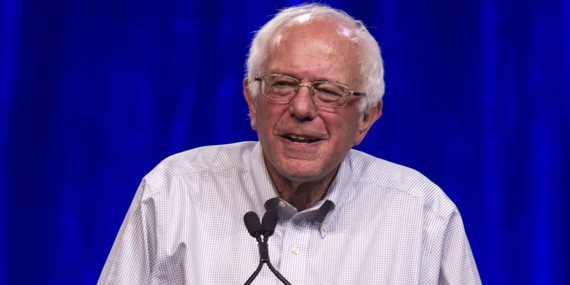 Some political leaders share more in common with Charles Darwin's theory of evolution than the hopes and dreams of the common man or woman. Nonetheless, there's no need to psychoanalyze or explain why a politician changes viewpoints when it's politically expedient, or when the poll numbers swing a certain way. In 2003, 71% of Americans approved of George Bush, 72% favored war against Iraq, and 58% opposed gay marriage. Since leading Democrats have always allowed Republicans to shape what it means to be patriotic and family-oriented, it's understandable why most liberals in Congress failed to stand up to the GOP or champion gay rights.

"They hate our freedoms" is a truly Orwellian phrase, however what's even more Orwellian is that leading Democrats at the time failed to counter Bush's propaganda with rhetoric that could have saved America from endless involvement in war. With Bernie Sanders, however, the Vermont Senator has always placed a progressive value system far ahead of any aspirations for the White House, or political power.

He voted against Bill Clinton's Defense of Marriage Act in 1996. When certain Democrats viewed their Iraq War vote as a stepping stone to the Oval Office, Sanders voted against the invasion, warning the Bush administration by saying, "I am concerned about the problems of so-called unintended consequences."

When Republicans touted the benefits of a pipeline stretching from Canada to Texas, Bernie Sanders said it's "totally crazy" to support Keystone XL. In a beautifully written Huffington Post article, Bernie Sanders states clearly in the title, The TPP Must Be Defeated.

Clear. Concise. To the point.

Most importantly, Bernie Sanders doesn't rely on political speech to hide his intentions, blur his motives, or shield his true value system from voters. For this reason, in addition to the fact that Sanders says "I'll be damned" if Americans are sent back to continued counterinsurgency wars in the Middle East, the legendary George Orwell would choose Bernie Sanders over Clinton or Trump in an election.

Since Orwell hated the "verbal refuse" of political speech and could catch a politician lying from a mile away, he'd surely refrain from voting for the more "presidential" politicians in America's political landscape.

George Orwell, the author of Animal Farm and 1984, in addition to a great number of brilliant essays and commentary, wasn't a fan of political speech. Eric Arthur Blair was born in British-ruled India and learned at an early age that language could be used to justify colonialism, the subjugation of others, and war. As for his contribution to literature, Christopher Hitches wrote that Orwell defended the English language from the "constant encroachments of propaganda and euphemism" that often resulted in the "deliberate distortion and even obliteration of recent history."

How many American politicians can you name who engage in the "deliberate distortion" of the English language to gain votes?

Bush and Trump, of course, and Fox News pundits, but can you name any Democrats?

Furthermore, it's important to understand why certain mainstream observers viewed Hillary Clinton to be the winner of the first Democratic debate, while almost every Internet poll had Bernie Sanders as the clear victor. In 1946, Orwell wrote a groundbreaking analysis of how political speech hides intent and distorts reality, titled Politics and the English Language. No doubt, Fox News and several Democrats and Republicans come to mind when reading the following quote from Politics and the English Language:

In our time, political speech and writing are largely the defense of the indefensible...

Political language -- and with variations this is true of all political parties, from Conservatives to Anarchists -- is designed to make lies sound truthful and murder respectable, and to give an appearance of solidity to pure wind. One cannot change this all in a moment, but one can at least change one's own habits, and from time to time one can even, if one jeers loudly enough, send some worn-out and useless phrase -- some jackboot, Achilles' heel, hotbed, melting pot, acid test, veritable inferno, or other lump of verbal refuse -- into the dustbin, where it belongs.

When politicians in America and around the world utilize "verbal refuse," or explain why they've altered their ideology, they are deemed to "evolve" on an issue.

For some politicians, a tragic Iraq vote is now a "mistake." Owning up to a mistake is good, isn't it?

It's also now appropriate to "evolve" on gay marriage, even up until 2013. Evolving is a good thing; don't you evolve?

A Facebook apology for owning a private server as a public official should suffice, since after all, it was only done in the name of "convenience."

All scandals associated with one candidate are now... "Benghazi!"

Because of an irrational disdain for Clinton, the GOP's incompetence and sheer bias has resulted in any relevant concerns, from a foreign donor scandal to questions about private servers, to be lumped into a right-wing conspiracy. Now, even Russia-linked hackers attempting to access Clinton's emails are disregarded as partisan politics.

On a side note, thanks for being so obsessed with Clinton, GOP, now even Democrats can't question the decision-making process of our former Secretary of State without being linked to your ineptitude.

Continuing with the semantic battleground called American politics, the FBI isn't an independent law enforcement agency, but also part of a "surreal witch hunt." As for the other intelligence agencies investigating a former Secretary of State's emails, who cares?

Any relevant critique, no matter how rational, is often met with, "You sound like a Republican!"

When it comes to ensuring America doesn't experience a $12.8 trillion financial collapse, only one candidate boldly tells Wall Street to "cut it out."

According to one CNN article, Hillary Clinton delivered a "poised, polished performance" while "firmly defending" herself against claims of flip flopping. In a truly Orwellian occurrence, 80% of viewers on a CNN Facebook poll felt Bernie Sanders won the debate, even as several CNN pundits and writers declared Clinton to be the winner. Regarding the Democratic debate, I'm honored to have my thoughts on why Bernie Sanders won the debate cited by the American Military University.

To some, being polished and poised wins you a debate in America, even if the FBI is investigating your ability to type an email. Also, during an interview with Chuck Todd on Meet the Press, the former Secretary of State explained why it's good to change one's value system over time:

How do you respond to some critics who say, you know, "Your positions have changed out of political expediency."

Now, with those that you did, you know, number one on the Iraq War vote, I've written about it, I've talked about it, I said it was a mistake. It certainly became a very clear mistake when you saw the way the Bush Administration conducted that war and the decisions that they made.

And so I have been very forthright in saying, you know, "As I looked at what was happening, it was a mistake."

On same-sex marriage, like a lot of people, including our president, I did evolve. And I was not raised to even imagine this. And I'm thrilled now that it is the law of the land. And I have a lot of good friends who are now able to be married because of the changes we've made legally and constitutionally.

When it comes to Keystone, you know, I was at the beginning of the process of trying to evaluate what was the best outcome.

Do these words sound poised, polished and presidential? In contrast, Bernie Sanders has remained steadfast on each of those topics.

In America today, some people even mock Bernie Sanders for being too honest and passionate. This explains why others defend every Clinton scandal, regardless of severity, and also why a reality television star is now a serious presidential candidate. Ultimately, the legendary George Orwell would vote for Bernie Sanders, not Clinton or Trump, because Sanders doesn't use semantics as a weapon or shield. The Vermont Senator will win the Democratic nomination and presidency because Americans are tired of what Orwell refers to as defending the "indefensible."