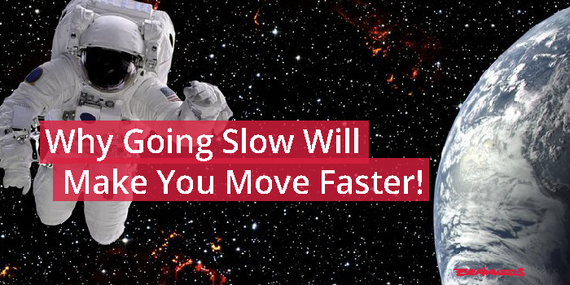 In a time where everything seems to evolve faster and faster, it is easy to get stuck feeling that we need to hurry. All the time. But, be aware: If we haste too much and are constantly in a rush, it is easy to make mistakes and lose the long-term opportunities that lay ahead. In the middle of stressful situations, we tend to forget that we can actually increase our speed dramatically if we first slow down a bit.

We see this is in the corporate world, too. In order to be successful as a company, leaders and everyone involved need to constantly find better (and smarter) ways to be more efficient and to increase the level of execution. In this rush for optimal performance and strategy execution, it is easy to lose sight of the important stuff, and to know where to focus our efforts. 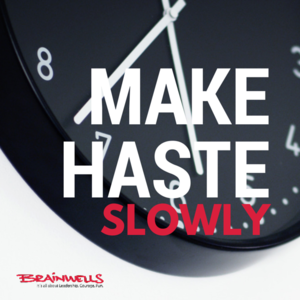 Recently, we met a CEO who wanted help to increase her team's efficiency. She felt they were cluttered in their everyday tasks. They lagged behind in the execution of their strategic plan. They did not see the same effect of their strategic initiatives as they had earlier. They had an excellent strategy, but she had realized that the execution of the strategy was actually more difficult than creating it. She needed our input on what to do next.

Our suggestion was to facilitate a half day assessment workshop for members of her team. We needed to schedule a time where the entire team could work together in order to get a view of the current situation.

Given that the core of the problem was this feeling of being behind schedule, it didn't come as a surprise to us that her initial response was negative. "Seriously, we need to increase efficiency and ramp up execution," she said. "We cannot spend half a day on an assessment workshop now. That will slow us down even further."

We had to remind her about the old saying, "You have to go slow in order to go fast." Even the leaders of the past who made great achievements knew the importance of going slow. The founder of the Roman Empire, Augustus, would use the Latin phrase "Festina Lente." This translates to: "Make haste, slowly." It served as a reminder for Augustus to perform activities with a proper balance of urgency and diligence.

When we start to move too fast, we often do not see what we need to see. It is important to move slow enough to make the necessary corrections as they come up. If not, we end up spending more time because we need to go back fixing things that have gone astray.

Even though it may feel counterintuitive to take the time to check off a status while you are in a hurry, it will significantly increase your chances of making the next move the correct one.

It is hard to say if it was the vision of becoming a modern Augustus, or our assurances on the positive effects of these workshops, but something convinced our client that this is what she had to do. Later she would express her satisfaction with the results. Not only did the few hours together help everyone involved get a collective view on the current situation; they discovered where the team had unused potential and where to make changes to secure attention on their strategic focus areas. Also, the workshop helped get her team's attention to progress back on track, something that had a greater effect than she could imagine beforehand.

You might not have a Roman Empire to build. But no matter what you are trying to do, your speed of execution would probably also benefit tremendously by slowing down for a few hours to get a good grip on where you and your team are at the moment.

Performing an assessment for your team is about the following:

Establishing a common view of the status quo. -- When members of a team work individually over a period of time in a concentrated way, it is easy to lose sight of the bigger picture. Getting a common view of your current strengths and potential will give you the short term actions necessary for execution towards a long-term goal.

Re-establishing your ambitions. -- As we know, nothing great happens without ambitions. The key is to not only make sure you as a leader have high ambitions. But to also ensure that your team shares these ambitions, and knows where to focus in order to work in that direction.

Recognizing progress. -- Acknowledging progress is one of the most powerful assets for motivation. Taking the time to acknowledge where you are is an easy and powerful investment to achieve increased motivation for going forward.

If done right, an assessment will give you and your team renewed energy for increased team collaboration and execution, in addition to be inspiring and even -- yes -- fun!

But it all starts with the acknowledgment that sometimes you need to go slow to go fast!

This blog post is also published in the blog LeadershipCourageFun. It is written by Kristine Maudal and Even Fossen, founders of Brainwells and creators of online tools and methods for leaders.

We have a common passion for making the corporate world a better place, and do this by training executives and executive teams in how to become Involving Leaders. Daily we experience magic moments when people exceed their own expectations due to new insights and skills. With love and care we'll share this magic with you. Thank you for being here.