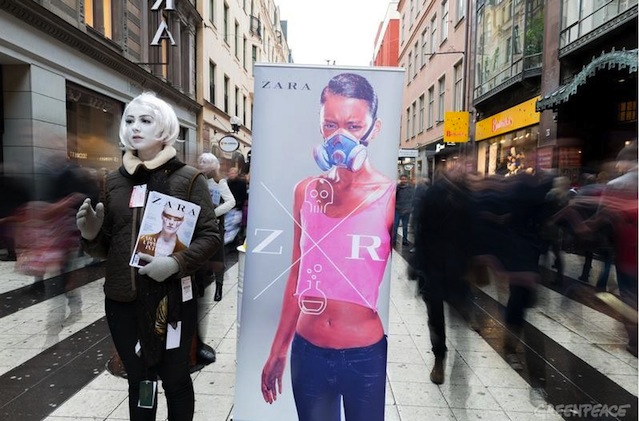 When I go shopping for clothes I'm always on the lookout for four things: cut, color, cost and quality. These days it's relatively easy to find clothes that are affordable and on trend, but increasingly difficult to find an item that won't fall apart after two to three washes.

The fast fashion movement has made it possible for us to follow fads by shortening the timeframe between production and distribution, but at what price? We all know that the quality has certainly suffered, but trying to produce trendy items at a breakneck speed has also caused certain companies like Zara to lose focus on ethical practices.

Back in April, Greenpeace decided to investigate hazardous chemicals in clothing by purchasing over 141 varied pieces of apparel manufactured from 29 different countries around the world. Among the 20 global retailers being scrutinized were Calvin Klein, Gap, and Tommy Hilfiger. In its findings, the organization discovered all of the companies had products that contained NPEs, a hormone disruptor, and most notably, Zara was one of the brands that contained the highest concentrations of the gender-bender chemical.

The scary part is hazardous chemicals aren't only released at the manufacturing process. Since toxic materials are incorporated into our clothes, every time we wash them we're also unknowingly contributing more toxins to our water systems.

After Greenpeace launched its Detox on Nov. 20, 2012, asking Zara to agree to a zero discharge commitment, the public response from the online community has been incredible. On Twitter tens of thousands of people were demanding that Zara take responsibility for their actions and so far over 300,000 people have signed up for Greenpeace's campaign to detox Zara. After nine days of serious viral campaigning the world's largest fashion retailer relented.

Zara is one the first major retailers to take a stance against toxic pollution in clothing and stated that "it will eliminate all discharge of hazardous chemicals from its supply chain and products by 2020." Dangerous chemicals like PFCs will be dealt with by 2015.

Along with making this promise to eliminate hazardous chemicals, the company has also vowed to disclose data about the release of hazardous chemicals into the environment in developing countries in Asia, Africa and South America where they have production facilities. The yearly inspection will offer more transparency and ensure ethical practices are upheld.

Since the initial movement launched back in April, it appeared that much progress had been made. Unfortunately, a new report titled "Toxic Threads: Putting Pollution on Parade" released on December 4 by Greenpeace International Investigations, revealed that facilities, some of which produce textiles for major high street brands including Levi's and Calvin Klein and GAP, are exploiting complex wastewater systems to hide scrutiny of their manufacturing processes.

"Of all the factories we have been to over the past few years, we have never before seen such large-scale pollution. The samples of wastewater taken on site have proven to be some of the most toxic testing results we have seen throughout our campaigning. This pollution must be stopped," says Yifang Li, Toxics Campaigner at Greenpeace East Asia.

Greenpeace investigated two of China's biggest communal wastewater treatment plants (WWTP), in coastal Zhejiang Province. Testing on water samples taken from near the pipe mouths revealed that processed effluent from both Shaoxing WWTP (China's largest in terms of daily processing capacity) and Linjiang WWTP contained toxic chemicals that are cancer-causing and chemicals that are toxic to reproductive systems.

Greenpeace investigators have testimonies from local communities whose soil and water are being polluted. Many of these locals are concerned about their health [2] so much so that in a typically water-abundant area, some communities have even been relying on the local government to deliver drinking water.

"Many international brands, such as Levi's, source their products from facilities within such Industrial Zones, yet identifying whether individual suppliers are responsible for releasing hazardous substances in their effluent is almost impossible. This provides a convenient smokescreen for unacceptable environmental practices at individual facilities, including the use and discharge of hazardous chemicals, by the global textile industry," said Li.

The dispersal of hazardous chemicals into water systems, both when clothes are manufactured and after they are sold - such as when chemical residues in the products are washed out - can only be addressed by the rapid and transparent elimination of their use at their source.

"Along with setting short term timelines to eliminate the worst hazardous chemicals, brands must require their suppliers to publicly disclose releases of these chemicals. Both are key steps to achieve zero discharge of hazardous chemicals by 2020 and Greenpeace will continue to expose brands that do not take responsibility for every stage of their supply chain," said Martin Hojsik, Greenpeace International Detox Campaign Coordinator (Greenpeace).

Over the past 10 years, clothing companies have been jumping on the green bandwagon because it's been the "cool" thing to do, but most have yet to make good on their promises. Greenpeace has created a term for these fakers: "detox greenwashers," or companies that intend to make a commitment but haven't taken any steps toward zero discharge. While the nine-day viral campaign against Zara was a success, this new report reveals that there are still many companies that are more concerned about creating profit than the effects their products have on our health and the environment. Still, the campaign did prove that as a collective people, we have the power to cause social change, especially with the help of social media. So join the conversation on Twitter at #PeoplePower and tell us why you think it's important to live in a toxic-free world.

For more stories like this on Culture-ist, check out our eco-conscious articles.