It could be said that extraordinary women are having a bit of a moment in pop culture. Supergirl is going strong in her first season on CBS. Jessica Jones is one of the most popular shows on Netflix. Once Upon a Time has been supplying us with strong female characters from fairytales and myth since 2011, including an Arthurian legend storyline in the current season. In 2017 we will see the long-awaited Wonder Woman movie hit theatres. 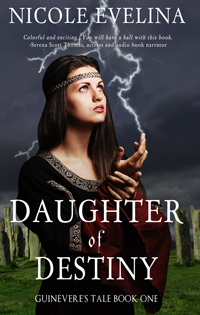 And on January 1, my debut novel, Daughter of Destiny was published. It's the first book in an Arthurian legend historical fantasy trilogy which tells Guinevere's life story from her point of view, beginning at age 11 and continuing into her 50s. Unlike previous iterations of the tale, she is not the fading wallflower of medieval courtly legend. This fifth-century Guinevere brings the powers of a priestess and the training of a warrior to her role, not to mention uncommon intelligence, wit and strength.

I'm certainly not the first author to tell the story of Guinevere. Persia Woolley, Nancy McKenzie, Rosalind Miles and Sharan Newman are but a few who have taken on her story in the last 20 years. But each one of us tells Guinevere's story differently, with a different purpose and different filter as we come to a universal tale with unique life experiences, cultural pressures and viewpoints. We are all products of our own generation and time. While being careful not to stray too far from history (lucky for me, the Celts are known for their strong women), I offer my series as a 21st century woman's interpretation of the timeless legend.

It's time to bring Guinevere's name into the public consciousness. 2016 is the perfect time for Guinevere to finally take her place as equal to her famous husband, to rule beside him, rather than be lost in his shadow. Why now? Beside the fact that we may FINALLY elect our first woman president:

It is a bold statement for me as a debut author to say that I hope my books do for Guinevere what The Mists of Avalon did for Morgan, but that is my goal. In addition to entertaining my readers, I hope to rehabilitate the reputation of a fallen queen and show that she deserves to be as honored and revered in own right as much as The Once and Future King she married.