When it comes to choosing favorites, it's hard. Most of us can't afford to go to a 1 Michelin-star restaurant, let alone a 3 star. And going to several of them just to figure out which chef we like the best, well, that's nearly impossible.

But let me help you.

Guy Savoy should be your favorite, and I'm going to tell you why. 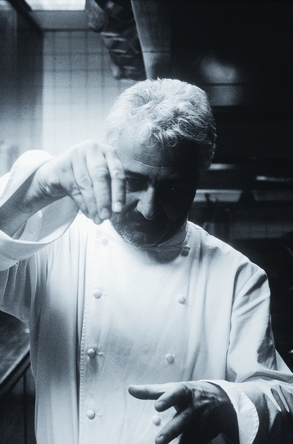 Sure, his eponymous restaurant in Paris has 3 stars, and yes, he trained Gordon Ramsay. But despite being an internationally acclaimed chef and a legend of nouvelle cuisine, he's the kind of guy whose eyes sparkle when he talks about a carrot. Just a simple, raw, carrot. Savoy describes fruits and vegetables as one would a Monet, which isn't surprising given his love for art.

For Guy Savoy, it's all about feeding people -- the intensely intimate, powerful act of preparing something that will be consumed. The words' respect' and 'passion' pop up the most when talking to him, and everything from his body language to his culinary soliloquies convey how seriously in love he is with food.

We sat down at his restaurant on the Rue Troyon and talked about his passion for singular, unadulterated produce and high quality ingredients. He told me about which cooking trend he hates, his special breakfast concoction, and why he decided to become a chef.

From his mother's kitchen...

Guy Savoy decided to become a chef because of his obsession with the tangible and the concrete. This obsession started early, in his mother's kitchen, while watching her transform several banal ingredients into fragrant sugar cookies. It was this magical process that inspired him.

"Tangible things are what punctuate my day. Early in the morning, the produce arrives, we look at the ingredients, we touch them and we smell them. It's a physical rapport. Then we transform them. In just a couple of seconds, they're completely altered. It's instantaneous. Everything happens in the moment. And it's tangible, it's concrete. At the same time, when someone eats what we've created, we can see their immediate reaction. These are always very direct, strong sensations, because these kinds of transformations are magical. That's why I became a chef. "

Whether it's cleaning a 14-kilo fish or inhaling the perfume of a mound of fresh peaches at the market, for him, every experience is gastronomically profound. He describes himself as being in a permanent state of marvel and sensory curiosity.

...To his 3-starred restaurant

"After 46 years in this profession, I'm still as fascinated with a dish that comes out of our kitchen as when I first started. I think about the initial work that was done by the farmer, because each product has a history - it has a genus, someone sowed its seeds, then it had to grow while avoiding pests and diseases, hail, the rats that come and try to eat them...these are the things that I always think of, and because of that I don't only respect the products, I venerate them.

It's my role to make my team understand that a carrot is just as important as a lobster. There are people who came before us who spent months bringing it into existence. And in just a couple of minutes we can either sabotage it or flatter it. Nowadays in Western countries it's easy for us to forget this, and we end up losing the notion of 'exceptional.' An apple and a carrot are not insignificant - it takes years for apples to grow, years! I'm permanently aware that an ingredient is not a spontaneous thing; it's a product of generations."

When a chef embodies such a high level of reverence for simple products and teaches his apprentices how to respect even the most mundane vegetables, it goes without saying that the result will be absolutely stellar. This is exactly the attitude and philosophy that I want a chef to have when I'm spending half of my salary on dinner.

And that's why Guy Savoy should be your favorite chef.

10 things you should know about Guy Savoy:

This is the second installment of the 'Getting to know French chefs' series.