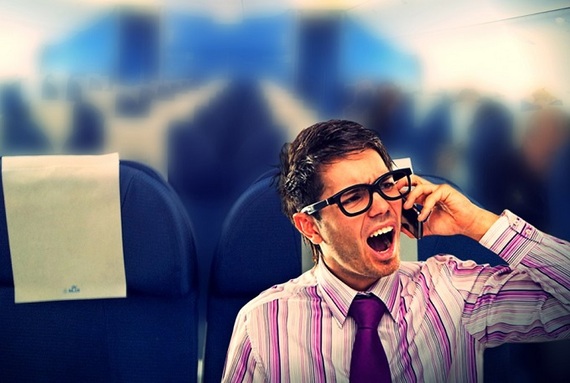 For more than 22 years the FAA and the FCC have essentially feeding us an urban myth that cell phone use would crash planes.

Who could question passenger safety?

But it was all a lie.

It was obvious to everyone who left their phone on during flights, as I often did, that airplanes would not come falling out of the skies because of cell phones and electronic devices. The signal from my phone or electronic device did not interfere with the pilots or the planes electronic systems.

Pilots have used their iPads for flight manuals for years, and Delta Flight attendants carry Nokia Lumia 820s to charge for on-board purchases, and yet passengers were not allowed to read a book on their Kindles during landings and takeoffs until recently?

International airlines have been allowing cell phone use and electronic devices for many years to no ill effects.

The question of whether we should allow voice cell phone conversations is not at issue here. Obviously there are strong opinions on either side.

Surprise: No planes came tumbling down.

Why We Should Stop Freaking Out Over In-Flight Phone Calls

"You're wrong" if you're against lifting the ban on in-flight phone calls, says travel columnist Joe Brancatelli.

"If you truly value the productivity of your in-flight time, you do want the Federal Communications Commission to lift its ban against in-flight calls using mobile devices," Brancatelli wrote last week.

The FCC will consider lifting the ban after yesterday's slim 3-2 vote, and the initiative will be open to public comment. But while 48 percent of Americans are up in arms about the issue, what they don't understand is it's really about cellular data, not voice calling. Only 19 percent of Americans support voice calling, while 78 percent of avid fliers are against it, an Associated Press-GfK poll released Wednesday. A petition on WhiteHouse.gov has gathered upwards of 5,000 signatures refuting the issue.

"Outdated and restrictive" is what the FCC's new chairman, Tom Wheeler, has called the current rules, as technology has advanced to the point where in-flight calls won't overload cell towers on the ground? Two decades ago, when the ban was created, cell phones were clunky, obtrusive and mainly capable of calling home.

And while the Federal Aviation Administration's decision to lift its ban on personal electronic devices during takeoff and landing is a small step forward, it doesn't do much for people who want the ability to get in-flight cellular access.

"As long as it's not being taken advantage of, it's fine," said Katrina Roberts of CookTravel.net. "We don't need to hear a teenager's woes or a lover's spat."

"We understand that many passengers would prefer that voice calls not be made on airplanes," he said in a statement on Nov. 22. "I feel that way myself."

If or when the FCC extinguishes the ban, all it's doing is removing itself from the discussion, and the power to allow cellular data will lie with the airlines. Delta has already gone on record saying voice calls will not be permitted on its aircraft while airborne.

Most Middle East airlines and a few in Asia and Europe already allow voice calls on planes, and guess what? They don't take advantage of that privilege all that often. An FAA study released last year found that in-flight calls ranged from 2 percent of all passengers in France and .3 passengers per flight in Brazil, with an average call length of a mere two minutes.

Seasoned Business Class travelers will also remember a time when domestic flights were equipped with air-to-ground telephones, and nobody used them. We live in an era where people are calling less and less and texting more and more. If people aren't calling on the ground anymore, what makes you think they'll start calling on an aircraft?

Americans have long associated time with money. So what's a better use of your time: watching limited in-flight entertainment or having the freedom to spend it as you choose - emailing your boss, texting to check up on the kids, streaming content of your choice on Netflix or Hulu, to name a few.

And for those afraid of inevitable voice-calling on planes, rest assured -- it can be regulated. Amtrak provides "Quiet Cars," where phones are banned and only "quiet talking" to your neighbor is permitted, and the prestigious Hampton Jitney restricts passengers to three minutes of talk time on their cells. Plus, airlines love their ancillary fees. A "talking section" of an aircraft may not be too far in the future.

The takeaway? The lifting of the ban on cellular data isn't the end of the world and will probably better your experience in the air.

"Raising the specter of planeloads of Chatty Cathys is a red herring," Brancatelli quipped.

The last thing anyone in the air travel industry wants is to subject fliers to long-winded conversations at 35,000 feet.

But what ridiculousness has caused the FAA and the FCC so long, neglecting scientific evidence which has been accepted by so many countries around the world?