Since the arrest of two journalists, Washington Post correspondent, Jason Rezaian, and his wife Yeganeh Salehi, a reporter for the UAE's National Newspaper, the Iranian government has refused to explain why they have been arrested. Nonetheless, all surrounding circumstances indicate that their arrests fall into a very familiar pattern of detaining journalists and particularly those with dual nationalities in Iran. 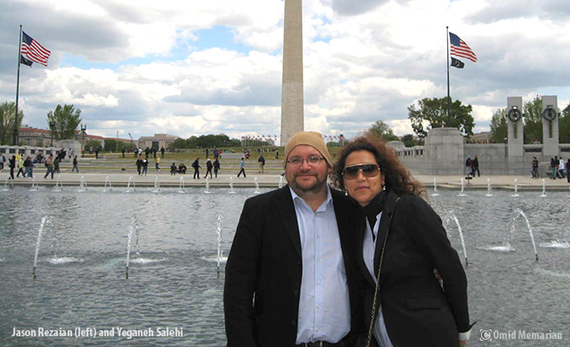 The detention of journalists in Iran tends to result in lengthy investigations, depriving detainees of access to the outside world, keeping them in unknown places, leaking some parts of the interrogation-investigations to the media close to the intelligence services, accusing them of being a spy or working for foreign governments or agencies, and finally an attempt to bring the accused before the national TV to deliver forced confessions. In some cases journalists are sentenced to lengthy time in prison in the initial court and the authorities release them on bail shortly after.

Two such examples include the 2009 arrest of Iranian-American journalist Roxana Saberi (resulting in her 100-day detention), and the 2009 arrest of Newsweek's Maziar Bahari, immediately following the 2009 presidential election. In all cases, international media and governments have condemned these arrests, considering these detentions to be in clear violation of human rights statutes and demanding the release of imprisoned reporters.

The underlying reason behind arresting innocent journalists may lie within a larger battle for political clout between different factions in Iran.

By arresting independent journalists,, the Iranian judiciary and security apparatus, under the control of Supreme Leader, Ayatollah Ali Khameni, manages to engender fear and intimidation among colleagues of the detained journalists thereby limiting and restricting the scope of their reporting. In doing so they also send a warning message to those international journalists traveling to Tehran regarding the consequences of impartial journalism.

Inadvertently these scare tactics serve as a message to the international community on the critical state of human rights and freedom of speech in Iran. The rampant impunity prevalent within Iranian intelligence and judicial organizations has allowed these agencies to be unaccountable for their questionable actions.

On July 22, when security agents stormed into and searched Jason Rezaian and Yeganeh Salehi's home in Tehran, arresting the couple, Iranian officials such as the Iranian President and Foreign Ministry refrained from issuing any statement on the subject, and have maintained their silence, and judicial authorities have consistently denied having information to share, stating that their case is in preliminary investigation stages.

However, several media outlets related to the state's unchecked security organizations have published articles waging accusations against Jason Rezaian in such detail that they appear to have access to the case files and interrogation transcripts themselves. Amongst the outlandish accusations manufactured are the claims that Jason Rezaian is a spy, and a security agent for an American organization in Iran.

Even if these were true statements, it is against Iranian law to publish the contents of interrogations of detainees in the preliminary investigation phase in the media. Doing so before the Prosecutor has indicted the suspects is a crime in and of itself. This is the case here, as the Prosecutor General himself has refrained from providing any information during his weekly press conferences for the past several weeks, in an attempt not to compromise the case in its "preliminary investigations phase."

Impunity within the media for releasing information pertaining to interrogations in ongoing cases has also become the norm in Iran: leaking details of the interrogations to media outlets with close ties to security forces in an effort to justify the continued arrest and prosecution of journalists in Iran.

This is exactly the same thing that I experienced in 2004, when I was arrested by parallel intelligence organizations in Iran--which have since become a part of Iran's Revolutionary Guards Corps (IRGC) the formal Intelligence Bureau, a parallel intelligence institution to Iran's Ministry of Intelligence. For several weeks, it wasn't even clear where I was being detained. Like Jason Rezaian who was purportedly being kept in a secret detention center in Tehran (instead of a registered prison), my detention location was a fruit orchard in a Northern Tehran neighborhood. Although my family had no information about me for three weeks, the Intelligence Ministry interrogators kept feeding media aligned with their interests fabricated information from their interrogations, which were then published in full.

Like other detained journalists, I faced heavy charges and the lower court sentenced me to 2.5 years in prison. In the absence of a media fanfare, the appeals court (which took three years to convene) not only exonerated me from all charges, but even apologized to my lawyers for the way I was treated during my detention.

Similarly, the reformist President Mohammad Khatami, like the current President, was also powerless over the security organizations that were working parallel to his administration, but he at least reacted to the detentions. For example, in response to a letter my mother sent him asking him where her son was, he replied stating his "embarrassment" over my disappearance and promised to do his utmost to locate me. Hassan Rouhani, however, has repeatedly refrained from reacting to clear instances of human rights violations over the past year.

Although Hassan Rouhani pledged to respect human rights in his presidential campaign and has repeatedly come back to these promises since assuming office, he has maintained silence with regards to the violation of human rights by intelligence apparatus such as the IRGC Intelligence Organization. However, as the President he is responsible for enforcing the Iranian Constitution. Rouhani is in a position to issue Constitutional notices to other state branches, keeping their actions in check. Such notices are not binding, but serve to clarify the administration's position and put pressure on those organizations that violate public liberties.

Many of Hassan Rouhani's supporters believe that if he gives in to an all-out war with the unelected state apparatus--which is a collection of powerful military clerics and commanders as well as unaccountable judicial, and economic organizations, responsible for the country's internal political, social, and cultural oppression --he would be putting himself in an overtly vulnerable position. In doing so he would be providing them with an opportunity to attack him, diminishing his political clout and potentially keeping him from achieving agreements in nuclear negotiations with the West.

But, the unelected state apparatus have taken advantage of Rouhani's silence over the past year, thereby amplifying human rights violations in Iran.

An increase in the number of executions last year, the banning of several independent news publications, coupled by the arrests of pro-Rouhani journalists, and the extended ban on several civil society organizations are among the actions being carried out by state entities operating beyond Rouhani's control and reveal Rouhani as a weak president with no power to materialize his political promises before his supporters inside and internationally.

The arrest of Jason Rezaian and Yeganeh Salehi, two international correspondents, only two months ahead of Mr. Rouhani's September trip to New York, is a significant example of one such incident.

As a follow up to his diplomatic trip to New York last year, it has been expected that upcoming negotiations would result in significant strides towards resolving the nuclear issue as well as improving Rouhani's image as an influential president for Iran. But given the arrest of Jason Rezaian and Yeganeh Salehi , along with several other prominent journalists, domestic issues will likely become the focal point of his interviews and encounters with the American press during his New York trip, emphasizing his inability to deliver on the commitments he made last year.

President Rouhani's current tactic of inaction poses a grave risk to his own political goals both domestically and at the international level, given his lack of authority over organizations under direct supervision of the Supreme Leader, many of whom unabashedly criticize the nuclear negotiations, describing these as "insulting." The president's capacity to enforce a potential nuclear agreement, were it to be reached, has even been brought into question.

Hence, Hassan Rouhani must hold those who commit human rights violations responsible, including those who arrested Jason Rezaian and Yeganeh Salehi, taking the necessary steps to guarantee their release.