Someone just sent a scan of a picture of me from an old college yearbook; I was just a kid really. I looked more like I was 14-years-old than 20. I was a recent graduate of a fundamentalist Christian high school, run by the man who pushed Jerry Falwell to start the Moral Majority.

From there I went directly to Bible college, where we were taught the gospels of Matthew, Mark, Luke, and John Birch Society. One professor was John Stormer, author of the fanatical None Dare Call It Treason. Another, Rev. Richard Angwin, went on to lead repeal of gay rights in Minneapolis. This was my world. This was everything I knew and yet I knew something was wrong with it. 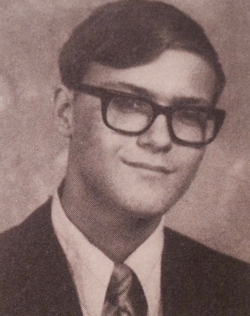 I dropped out of Bible college, deciding I had enough of those intolerant, hateful, hypocritical people. Then along came Anita Bryant with her Save Our Children crusade and enough was enough. This kid, steeped in Bible-believing, conservative fundamentalism, sat down and wrote a letter to the newspaper denouncing Bryant's intolerance. To say the least, it was noticed.

I got a call from a right-wing radio shock jock, Warren Freiberg, asking if I would come on his show to discuss my letter. Being too young to be afraid, I did. Twenty minutes into the show, Freiberg got quiet, then asked: "Are you gay?" I just said, "yes." The next phone call was from an outraged woman, furious that I had defiled her home as a visitor. There was no going back. I had little to stay for and moved to the big city to continue a fight started by that letter.

Without Anita's hateful campaign, I wouldn't done it.

Frank Kameny was a conventional, perhaps boring, astronomer who went to work for the federal government. When they learned he was gay, he lost his job. He fought the dismissal in the courts, losing before the Supreme Court in 1961. He became a full-time activist from then on, organizing protests on behalf of gay rights in the early 60s. Being a victim was all it took. Enough was enough.

The Stonewall Inn was a trashy bar run by the mob, a place where drinks were watered down and prices inflated. Serving a drink to a "known homosexual," was itself a crime, and it took mob connections to stay in business. Just being gay in New York was a crime. In spite of the bar's seedy reputation, and the way it exploited the illegal status of LGBT people, it was a safe place to be out and free. It was the only place where gay men were allowed to dance together.

At 1:20 AM, June 28, 1969, police decided to harass patrons of the bar yet again. Six officers stormed in shouting, "Police! We're taking the place!" Patrons were pushed outside and some were marked for arrest, especially the drag queens. People gathered outside and the mood shifted. A cop shoved one transvestite and she hit him with her purse. The crowd booed the police. Someone started throwing coins and then bottles followed. The paddy wagon was attacked and people tried to overturn it. Enough was enough.

In 1978, Harvey Milk was in office, the first openly gay man elected and then Anita's hate came to California, in the form of Proposition 6, a measure pushed by extreme conservative State Senator John Briggs, meant to ban any gay person from working in schools. Milk led the successful campaign to defeat the measure, but days later he lay dead in a pool of his own blood, executed in San Francisco City Hall by Dan White, a former supervisor and cop.

White got a slap-on-the-wrist sentence for killing Milk and Mayor George Moscone, and when the sentence was announced 3,000 angry men and women marched on City Hall. Rocks were thrown, and police cars were set on fire. Enough was enough.

Police responded by marching into the Castro district, two miles away, and attacking people peacefully drinking at a gay watering hole. I remember that night though I was in Chicago sitting on a bench inside the Unitarian Church where the gay community had gathered to discuss how to respond to stepped-up police harassment. As we sat there listening to the accounts of police attacks on our community someone charged in and shouted: "The gays are rioting in San Francisco."

New generations of LGBT kids came along and many of them knew a more tolerant world than the one in which I grew up. Sure, it wasn't perfect but they didn't experience quite the systematic oppression endemic in my youth. Hell, gay couples were even being allowed to marry in some places. This generation had the privilege of asking when they could have equal rights; my generation was fighting just to be safe on the streets.

And then came Prop 8. Young people who expected peaceful, slow progress were shocked that the voters would strip gay couples of marriage rights overnight. Prop 8 was a wake-up call. As the New York Times noted, "Outraged by California voters' ban on same-sex marriage, a new wave of advocates, shaken out of generational apathy, have pushed to the forefront of the gay rights movement..."

One gay man, 23, was quoted: "We've been spoiled. Because while we knew we'd been discriminated against in the past, we'd never felt it until now." Enough was enough.

The "culture war" didn't start in the 60s, or 80s and "liberals" didn't start it. It started with laws on sodomy, divorce, and censorship; it included Jim Crow laws and segregation.

The culture war was already in full swing in 1919 when Franklin Roosevelt authorized a witch-hunt against gay sailors in Newport, Rhode Island. Before that, the culture war included new laws on contraception and abortion in the late 1800s. The culture war is an old one; it is a war on individual rights and freedom. All that changed was victims started fighting back. They did it through the movements for civil rights, gender equality and LGBT rights. The victims said, "Enough is enough," and refused to endure anymore.

Each time cultural authoritarians thought they won a major victor, all they did was increase the number of angry victims willing to put it all on the line to stop them.

So, Anita, Mr. White, anonymous vice cops, Moral Majoritarians, and the rest of you, thank you. Don't you see it was your hate, billy clubs, arrests, and even bullets that caused a new American Revolution. Each of your victories was another step toward your defeat.