By now you've probably heard of hidden city ticketing, aka. throwaway ticketing. It became popular when 22-year old computer whiz, Aktarer Zaman created the website Skiplagged which helps people abuse the airline hub-and-spoke business model. This is a clear violation of airline policy, but it's still popular with travelers since it can save them money.

How did the travel industry respond to this growing trend? Well United Airlines and Orbitz decided to sue Zaman, so clearly they weren't happy. Orbitz eventually settled out of court, and a judge threw out United's lawsuit, so a victory for travelers right?

Not exactly, it's been well documented that Skiplagged used some questionable tactics to monetize its website, so they're not as innocent as they may want you to believe. As much as I like a good travel deal, hidden city ticketing is not something I would recommend.

For those unfamiliar with Skiplagged and hidden city ticketing, this is how it works.

Throwaway ticketing has been a lesser known travel hack for years, but sites like Skiplagged has made it easy for the everyday traveler to take advantage of. There's potential to save money, but it's not completely risk free.

What happens if the flight gets rerouted and the plane no longer lands in the destination you wanted? You're out of luck, the airline only needs to get you to the final destination on your ticket. So think twice before using this hack just to save money. 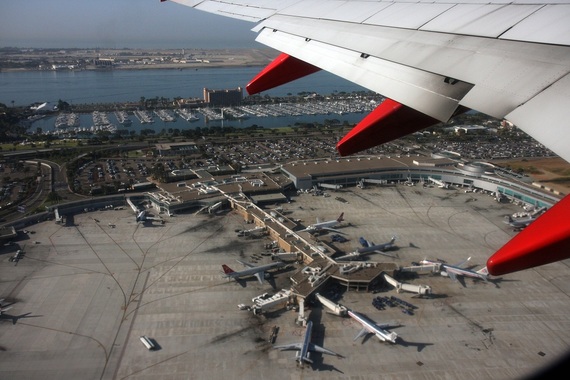 It increases prices - We can argue about the costs of flying until the end of time, but airlines price their fares accordingly. Hidden city ticketing hurts airlines because now they can't sell that 2nd portion of the flight as a separate ticket, which means less revenues. They're not going to consider that a cost of business, eventually they'll just raise the price of every other ticket.

Many people don't realize that the lower prices of the longer flights are usually cheaper because airlines are trying to compete with a lower fare carrier. If the system keeps getting "hacked" then they'll just stop offering these flights or charge more on other flights.

It causes delays - Gate agents will try their best to make sure everyone gets on the plane, so if you got off with no intention of returning, those agents will wait as long as possible for you. If you don't show up, they need to check to see if you have any checked baggage (you don't), but they don't know that. This might delay the flight by just a few minutes- if at at all, but it's an inconvenience you've created for every other passenger on the plane.

Also consider the traveler who is willing to pay for a seat on that exact route that you're skipping out on. It'll delay their travel plans since they won't be able to purchase the seat that you've left empty.

It's not foolproof - Getting re-routed is the biggest worry. A change in the stopover location will force you to buy a one way ticket to your intended destination, and possibly require you to get a room for the night. Simple math shows that you'll need to save at least $300 before you seriously consider throwaway ticketing.

Airlines who catch passengers taking advantage of hidden city flights have been known to boot them out of their frequent flier programs. It wouldn't be a surprise if they take more drastic measures in the future.

Final word
Generally speaking, hidden city ticketing tends to benefit Americans who are flying domestically the most since there are more hubs and airlines to chose from. Canadian passengers might be able to find a throwaway ticket to a US destination, but if you're looking for something within Canada, it's unlikely you'll find a deal. Overall, this is a risky form of travelling, and in my opinion, not worth the risks just to save a few dollars.

You Might Also Like
How To Avoid Roaming Charges when Travelling
Airbnb Or Hotel? Which Do You Prefer?
Japan Travel Blog: Endless Discovery

For more budget travel stories from Barry, check out his blog at Moneywehave.com.