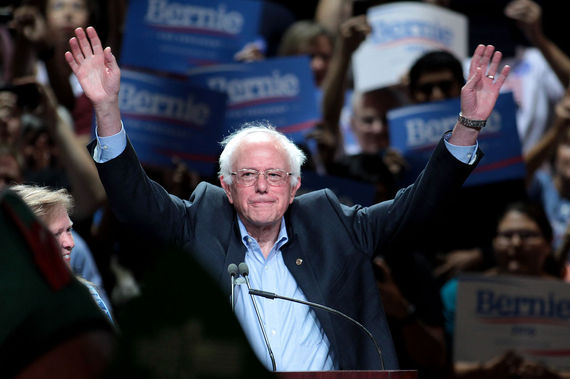 The pundits went coo-coo for Clinton after the first Democratic debate.

But the public, according to lots of data, "felt the Bern," to borrow a catch phrase from Sanders supporters. In fact, an article from an organization called "Fairness and Accuracy in Reporting," (FAIR) offered some impressive data that seemed to prove that Sanders had crushed the competition.

It's no surprise, really, that the mainstream print media all got it wrong. They're the ones who got "Trumped," remember?

Before Trump even threw that hair into the ring, they had decided he couldn't really win. Many are still saying that. And as much as I hope they're right, I also know that Trump's triumph should have been a wake up call.

America is just plain sick of politicians. Especially politicians who sound and look like politicians. Sanders is a long time politician, but the people who rushed to Google his name during and after that debate heard something in his voice. Something strong and sincere and...well...human.

He came off like a tough old bird who really was sick of those damned Clinton emails. And all the other smoke screens and "straw man" distractions designed to keep the public from thinking about--and politicians from addressing--the important issues.

Okay, yes, aside from Clinton, he didn't have much competition. Martin O'Malley made a few important points and did seem rather presidential, when he managed to get a few words in. But Jim Webb looked and spoke as stiffly as that "animatronic" Abraham Lincoln at Disneyland.

And oh dear Lord, what on earth was Lincoln Chafee thinking when he responded to a question with the political equivalent of the old "dog ate my homework" excuse?

Asked why he voted to repeal a bill banning banks from using our money to make high risk investments, he offered this:

But what got people researching and sending checks to Sanders was how downright real he seems. He gets a little flustered. Looks a little rumpled and rough around the edges.

But he doesn't back down from even his most controversial views. He's the odd Dem out on gun control, for instance, siding with folks from his neck of the woods, whose views on gun ownership veer sharply away from the party line.

And some Black Lives Matter reps recently took him to the woodshed with reason. It's difficult to predict whether minority voters are warming up to Sanders. He may be too far left of center for some. And many African Americans still quip that Bill Clinton was actually the first "black" president. So Hillary has a little more "street cred" by association, in some camps.

But this Clinton doesn't move us like Bill used to. She's got the Old School, high school valedictorian gestures and tone down pat. Scans the crowd "earnestly," punches those catch phrases and gives you the "five step plans" and bullet points.

But for some of us, it just sounds too polished. Too perfect. We've seen that show before and we've heard all the promises. In fact, sometimes, I could almost finish those shop worn sentences. Where's the fire in those eyes? Why don't I feel anything?

America wants something new. Something authentic and maybe even a little scary. Someone who might toss those canned responses to go toe-to-toe with an opponent. That's why Trump is still killing it out there. And why Sanders may be the best antidote the Democrats can offer.

So Sanders isn't just an "also ran." Far from it. The contributions came pouring in after his awkward appeal at the end of that debate--$1.4 million by some estimates.

Will the votes roll in like that, too, on election day? Too soon to say. But one thing's for sure. Americans aren't listening to the "experts" this time. They're turning on, tuning in and doing the research themselves.

This is a watershed moment for the mainstream media, already struggling to stay afloat in this Internet age. Will it keep its head above water or be swept away?

C'mon, this isn't rocket science, guys. This is a real revolution we're seeing here, or the closest thing to it that America has seen in a long time.