Noise goes up but the quality stays the same.

Hiring is always hard. The hardest thing to do at a company is the recruiting and hiring. It was really hard when the economy was doing well. Paradoxically, for certain industries (especially those reliant on innovation such as those in the tech space), it's even harder when times are tough.

First, let's assume you've already bought into the "When Good Isn't Good Enough" philosophy of always trying to hire A-players because they are just so much more productive than B-players (an 'A-Player' by definition is incredibly productive and smart and has that 'it', that rockstar-esque factor that makes everyone want to work with her). That means you won't settle for people who are good but instead hold out for people that are great.

Great people -- the A-Players -- are a very different breed from the good (B-Players) and mediocre (C-Players). Great people are more likely to be employed with a company since a great person is often over 3 times as productive as a good person. Joel Spolsky argues in Smart & Gets Things Done that an A-player is anywhere from 5-10 times as productive. Joel looked at coursework data from a Yale computer science class and found that the fastest students finished their workload as much as ten times faster than the slowest students (average was 3-4 times faster). 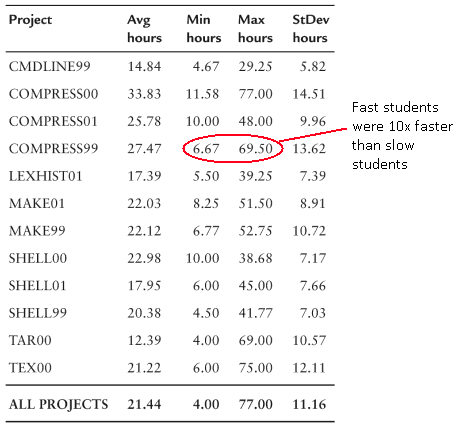 In troubled economic times, anyone can get laid off, but a disproportionate number of layoffs tend to fall on C-players. This is because they are the lowest performing people in a company and there generally are more C-players at a company than any other caliber. Note that this isn't always true, as evidenced with Yahoo!, a company that has recently experienced many layoffs but doesn't have many C-players. In Yahoo!'s case, majority of the lay-offs fell on B-players and even some A-players. Yahoo! is an exception and is an exceptional company -- most large companies, however, are chock-full of C-players.

A smart company would (or should) never lay off a great person unless her/his job function is eliminated. For instance, if a smart company had to lay off one of two software engineers with one being great and other being good, it will very likely lay off the good engineer and retain the great one (and might even give the great person a raise). Again, this is the logic that smart companies should follow. Then again, there are many dim-witted companies that lay off their great people for odd reasons and so you'll find some great people out of those laid off.

Where to find that A-player

Some A-players are less likely to be looking to jump ship during tough times due to a risk adverse profile, security, financial reasons, or other reasons. They are happy where they are and more likely to hunker-down in tough times. On the flipside there are A-players that are more likely to leave. Tough times often paint companies into a corner and force them into maintenance mode rather than continuing to innovate. Great players love to innovate and usually need to innovate. It's usually very hard to keep these type of A-players caged-up and thus this presents a big opportunity for recruiting.

For instance, in the past it was really hard to hire great software engineers out of financial behemoths like Goldman Sachs, Morgan Stanley, and JP Morgan Chase. These companies have outstanding people and pay these people really well (often 50% above the salary at a tech company). Nowadays, even if these people have not been laid off, the great people are going to be leaving in droves. Why? Because in the next two years, it is really doubtful they will be doing anything remotely innovative. Instead they will be maintaining current systems due to the understaffed and underfunded technology departments. No fun there so expect a big exodus out of these companies.

It's also worth noting that great people are often first to leave sinking ships. They don't feel they need to stick around for a severance because they are confident they can always get another job.

How to deal with the paradox

Let's face it, these great, A-Player type people are just really hard to find. Let's say for sake of argument that A-players make up 1% of the population that could do the job, B-players are 19%, and C-players comprise the other 80%. It's uncertain if these percentages are accurate, but there definitely are more C-Players than B-players and more B-players than A-players. Now if people find out you are hiring (through a Craigslist ad, posted on careers page, etc.), it probably means you are going to get a massive influx of resumes from C-players. Many of these resumes will be indistinguishable from those of A-players (it's always hard to distinguish on paper). Which means the amount of noise (aka undesirable hires) will likely increase. Which means more work sifting through these resumes and talking to many more people.

It's important to screen for great people in order to turn the volume down on all the noise.

Unfortunately, it is really hard to tell the difference between an A-player, B-player, or C-player just from a resume. Which means you need to engage with candidates and therefore you'll have far more candidates to deal with given this economic climate. My guess -- for a standard job announcement -- you'll have three times the number of C-players applying, twice the number of B-players, and the same number of A-players. Wow... your noise level has just massively increased! 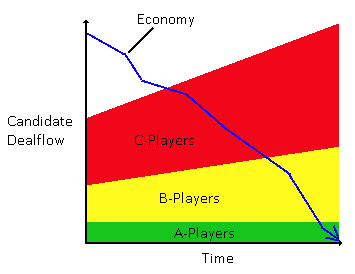 At Rapleaf for instance, we have a written one-hour technical interview as the first screen for resumes we like. Last year, our pass-rate for the test was 17% ... meaning 17% of the candidates passed the written interview and moved on to a second round (a live chat with a Rapleaf engineer). Today our pass rate is about 6-8%. Our noise level has really increased.

One way to decrease the noise level (and thereby increase the amount of quality) is to specifically target candidates rather than to post a job ad. I would suggest targeting a company you think has great people, call into that company, and try convincing the talent to meet with you. I know if I was based in Manhattan and was recruiting software engineers, I'd be calling on the people in the top banks. While not everyone at a top bank is a great player, your ratio of great-to-good is going to go up substantially (assuming they haven't already left).

Of course, not every position is harder to hire in this downtown. It is easier to find great people whose industries have been totally decimated by this recession. You're in luck if you are looking to hire investment bankers, corporate lawyers, construction workers, or people in manufacturing.

This downturn looks to affect us all for the next couple years, so be sure to fill your company with only A-players and thereby creating your own A-Team. 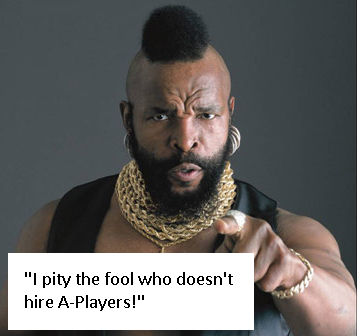