Houstonians are asking Beyoncé to help stop her hometown from legalizing discrimination. It's just the beginning of a fierce battle to save one of the country's most important citywide non-discrimination laws.

This November, Houston voters will decide whether to keep or repeal the Houston Equal Rights Ordinance (HERO). HERO bans discrimination on the basis of characteristics including race, sex, religion, disability, veteran status, sexual orientation, and gender identity. Since its inception, HERO has been opposed by conservatives who criticize its protections for LGBT people and have waged an aggressive campaign to defeat the measure.

The likelihood that we lose without strong support from a broad coalition is terrifying -- and very real. From Springfield to Fayetteville, our opponents have so skillfully spread misinformation that nondiscrimination ordinances have been overturned time and time again-- leaving communities devastated and divided and leaving residents without protections. In 1985, Houston fought a similar battle for a law that would have granted protections to LGBT city employees. Some of the exact same opposition that organized to defeat our first ordinance is at it again. Losing HERO would set Houston back thirty years. All of the progress that we've made as a city in the last three decades to make our city more welcoming will be lost.

The prospect of losing HERO is what motivated a group of Texas students last week to launch the #BeyBeAHERO campaign, asking Beyoncé - the world's most famous Houstonian - to take a stand against legalizing discrimination in her hometown.

The campaign went viral, garnering national media attention and sparking a wave of memes and original art asking the pop star for help in raising awareness about the need to protect HERO. 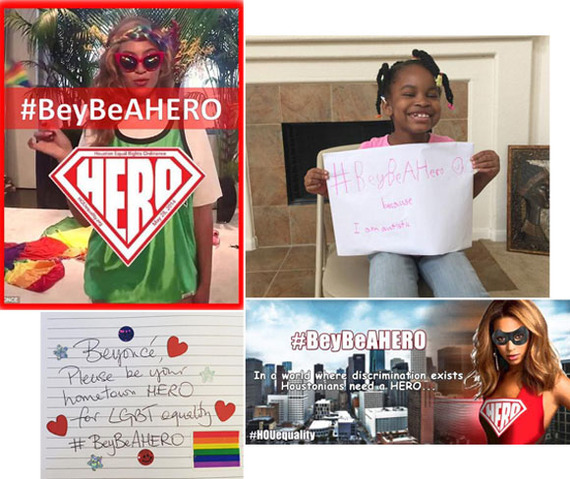 Beyoncé has yet to respond to her hometown's request for help. If she does decide to take a stand against the effort to rollback basic non-discrimination protections in Houston, she'll likely have a monumental impact on the outcome of the vote in November - motivating a young and diverse coalition of voters to show up at the polls and ending opponents' stranglehold on local media coverage of the ordinance.

Even with her help, supporters of HERO will face an incredibly difficult battle to protect one of the country's most important citywide non-discrimination laws. They'll be up against an organized opposition, backed by Fox News and prominent national conservatives like GOP presidential candidate Mike Huckabee. They'll have to deal with a local media environment that regularly and uncritically repeats the opposition's bogus talking points about HERO, spreading misinformation about what the ordinance actually does. And they'll have to win in a political environment where many people simply don't realize that, without HERO, a gay couple in Houston could be legally married on Sunday and then fired from their jobs and kicked out of their home on Monday without any legal recourse.

Supporters of HERO are encouraging Houstonians to sign a pledge to be part of the fight against legalized discrimination.

The #BeyBeAHERO campaign hopes to recruit the world's most powerful pop star in their effort to protect the most vulnerable members of Houston's community. It's hard to blame them for asking for her help. Over the next three months, activists in Houston will have to undertake the incredible responsibility of convincing their friends, families, and neighbors to band together and prove to the world that discrimination isn't a Houston value.