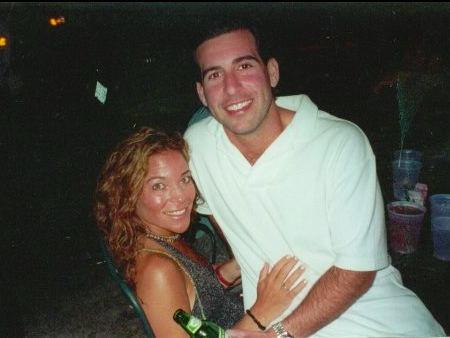 The city of New Orleans will always hold a special place in my heart. And not just because I went to college there. But because I met my husband there. During Jazz Fest. Twenty years ago tonight.

But hold on because there's a reason I'm telling you this story, and it goes a little something like this: Two months before I met my husband, I was engaged to another guy. We'd been together for about five years, and then one morning, when I was just innocently applying mascara and getting ready to split for work, he waltzes into the bathroom of the apartment we'd been sharing for the last three years and tells me he doesn't want to get married.

I'm gonna go ahead and spare you all the sad, sordid details--you know, the ones that may or may not involve me flinging my scalding cup of coffee all over the row of his immaculately pressed Hugo Boss suits hanging in our shared closet--and skip straight to the moral of the story.

Say you've just been dumped by your future husband and your entire foundation has just been ripped out from beneath you. And say your best friend calls from LA to invite you to go to Jazz Fest with her. And say you REALLY don't want to go because you aren't quite ready to face life as a single chick in Manhattan, let alone on vacation in New Orleans.

I mean, who could blame you, right?

But then, say, you wake up one morning and Alanis Morrisette is on the radio singing You Outta Know, and you go to get dressed and you realize you are suddenly drowning in your size 26 vintage Levis and so you think Fuck. This. Shit.

And so you take a leap and you book a flight to New Orleans and you get on a plane. And you GO.

And let's say that it turns out that this guy lives five blocks from you back in Manhattan.

And one of the friends you are now in New Orleans with? Um. He totally used to date her.

So what do you do?

Do you give him your number?

Do you tell him you were just dumped, like, three months before your goddamn wedding?

You tell him it was TEN months ago.

And then one day, when you're back in New York, after you've been dating for say, two or three months, and you slowly begin to realize that this may actually be going somewhere, you bite the bullet and tell him the truth.

And if he's all like "whatever," and doesn't seem to give a shit that up until this very moment your entire relationship has been based on a lie...

And that moral of the story I was talking about earlier?

(This piece was originally published on suburbabble.com)

Hollee Actman Becker writes for sites like Scary Mommy, Parents, Romper, Fit Pregnancy and FlockU. Check out more of her work on her website: holleeactmanbecker.com.

I'm A Teacher Who Works Hard For Your Children. Unfortunately, I Can't Afford To Have My Own.