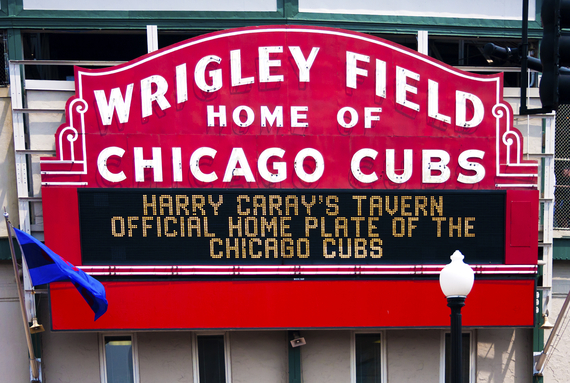 The best of the best have a process. This is the collection of mental, physical and technical routines.

The process is in Chicago. It is on the ice in the Madhouse on Madison. Let's go Blackhawks! Now it has made its way to the Friendly Confines of Wrigley Field.

BEWARE:
If you are a Cubs player, DO NOT read the rest of this article!

Chicagoans can thank the Ricketts family for buying the hapless Cubs franchise and bringing in personnel guru and general manager Theo Epstein. They can thank Mr. Epstein for spending the Cubs budget wisely on enormous talent. This ingredient is a must in order to challenge the best of the best. His biggest move was hiring the Cubs' fearless leader and manager Joe Maddon. Joe is awesome in the way he handles his team, the media and all the naysayers. However, in this writer's opinion the unsung hero besides the amazing Cubs fans is the Maddon protégé and bench coach Dave Martinez. Martinez is a graduate of the S.C.O.R.E.® Success System as a player and he knows the Zone and how to attract it. This thought process has been proven for 40 plus years and it's influenced every MLB team in some way (Mike Matheny of the Cardinals and Robin Ventura of the White Sox are S.C.O.R.E.® graduates).

Martinez keeps the team's attitude in a "purposeful calm" and he let's them play with the relaxation and enjoyment that eludes most teams in the post-season. Watch him interact with the players. He is the action and interaction while Maddon remains stoic, calm, cool and calculating. This Batman and Robin duo have it going on.

The pressure is great for the 2016 Cubs' fan base. The stress from this vocal group of diehards typically falls back on the team and the teams of the past have wilted under the pressure.

The Cubs veterans and rookies have prepared all season for this moment. They love the "moment of truth" when the next move dictates the outcome. They deserve success and all they have accomplished. They believe they are not done. Most that watch them now believe as well.

No Cubs team has won a World Series since 1908. Twenty-five men dressed in classic shades of red and blue have collectively tried to accomplish this feat for 107 years to no avail. Why and how have they loudly knocked on the door of success in 2016? What is the main difference this year compared to all the other times?

According to what Cubs manager Joe Maddon told his team, "to not let the pressure exceed the pleasure." Simple enough but how do you do this? You need a process or a series of actions or steps taken in order to achieve a particular end.

What is the mission of a process?

It's to spend the majority of your thoughts in the moment, as opposed to thinking about the past or the future. It is not having too much or too little of self-discipline, concentration, optimism, relaxation and enjoyment. The high level of these intangibles is when the peak performance mindset of the Zone arrives.

There are three phases of a great process. They are:

1. Pre-performance Time: This is the time before an event, game, match, round, etc. The best baseball hitters and pitchers for example have physical, technical and mental routines from the time they enter the baseball park until the game begins. These routines are batting, pitching and fielding practice, food intake, hydration, visualization, warm-up, training room procedures, meditation, tactical review, team bonding rituals, and relaxation time. You could set a watch to most of these routines. When an entire 25-man roster has individual and team routines, here's what happens:

a. You seldom, if ever hear individual complaining.
b. You seldom, if ever, hear any negativity.
c. No one acts like a victim or judge.
d. The competition is irrelevant, except for specific tactics.
e. The individuals "stay in the moment."
f. All enjoy the process as a positive habit.
g. The collective team personality is loose, vibrant, fun loving and confidant.
h. The team acts as a brotherhood with a "one for all and all for one" mentality.

2. Performance Time: In baseball these are the times just before a pitcher throws the ball to the plate or the hitter walks from the dugout to the on-deck circle and eventually gets settled in the batter's box. These routines are all personal and most have been honed well before the player has become a professional. It is these routines that one could definitely set to a watch. For a golf example, PGA and LPGA players do their best to take the same amount of time between finalizing their club, ball shaping and target selection, addressing the ball and eventually striking the ball. The best golfers typically take between 12-14 seconds to execute this pre-shot routine. When stress arrives it attempts to cause the golfer to hurry this routine or slow it down substantially.

It is during performance time that individuals need to stay the course in behavior or slightly adjust their physical or technical behavior, overall mentality, strategies or tactics. The champion adjusts swiftly and decisively.

3. Post-Performance time: This is the time after a performance and it is here that the best evaluate and analyze swiftly, non-emotionally and objectively. Having a personal, standardized checklist is the best way to learn and move on to another performance. This period of time assists an individual and or team in threading positive performances together. Once a performance is evaluated and its lessons extracted, then it is forgotten. "Next!" is the battle cry.

A great "process" breeds confidence, belief, expectancy and extreme optimism. A process can easily be moved from city to city and one can perform with it regardless of the circumstances, situations and conditions. It is the great coaches and managers that understand and cultivate the process for the overall benefit of the team.

With a sound process in place it will act as a mental fortress to protect players from the media, fan expectations, seemingly insurmountable foes, weather conditions and other negative distractions. A solid process can and will definitely overcome superstitions like the Chicago Cubs Curse of the Billy Goat. Supposedly, the curse was placed on the Cubs in 1945 when Billy Goat Tavern owner Billy Sianis was asked to leave a World Series game against the Detroit Tigers at Chicago's home ballpark, Wrigley Field because his pet goat's odor was bothering other fans. He was outraged and declared, " Them Cubs ain't gonna' win no more," which has been interpreted to mean there would never be another World Series game won at Wrigley Field. The Cubs have not won a National League pennant since this incident and have not won a World Series since 1908.

Go Cubs! You've had a great process this 2016 season and you're on a pathway to the World Series. Stay the course! Get in the Zone and lock in the moment. Immunize yourselves from all external distractions, especially the internal distractions created in your own mind. Stay "one pitch at a time" until the Curse of the Billy Goat is forever removed.

WARNING TO ALL CUBS FANS!

Just like in the final game against the San Francisco Giants, the Cubs players feel they always have a chance. They are not to be taken lightly. However, in the 9th inning in Frisco with the Cubs trailing by four runs there were lots of Cubs fans that had doubts. Please send out positive vibes until the mission is complete. No judge or victim thoughts. No negative energy. None. When the Chicago faithful believes, expects and knows their beloved Cubs will win...they WILL win. They are that good! Period. Go Cubs!

P.S. Highest price paid for a World Series ticket in Chicago? A Cubs fan paid $71,800 for 4 tickets on StubHub to Game 5. Wow! It's refunded if Cubs don't play.