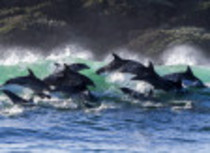 When a dear friend asked me, "When and why did you become an Ocean's Advocate?"

My response was this...
The Instigating Event:

Around New Years I was introduced to the movie, "The Cove." This movie addresses the cruel, painful, and irrational slaughters of dolphins in Taiji, Japan. And, although the movie only actually shows 1-2 minutes of actual kills, those 1-2 minutes were enough to anger me, sadden me, ignite a spark in me.

Since then, I have watched the movies "Blackfish," about the captivity of Orca (Killer) whales at places such as Sea World and "Racing Extinction," about the anthropogenic (human)-driven, sixth-mass extinction of species on our planet.

In all such cases, humans were the cause of suffering.

In the past 6 months, I have also read numerous articles, academic papers, and pop-media related to these topics as well. Most academic articles discuss the sentience, high levels of intelligence, family structures, cooperation, and culture of these beautiful animals.

Based on my readings and the obvious similarities I see between these animals and ourselves, and the direct and indirect threats that we humans have imposed on these innocent creatures, living their lives, I have tried to educate and advocate to others, the need to care for and protect our oceans.

Gandhi said: "Be the change you want to see in the world."

If I want to see more people love, live, and care for our world and its oceans, then I must start with myself, and educate those who may have no knowledge about these problems.

My PhD in climate change and nutrition give me a unique insight into ways we can directly and indirectly help protect our planet and its beings through what we eat; particularly when it comes to our negative effects on the oceans and ocean-derived food sources.

Before my in-depth endeavor into ocean advocacy/reading, I only knew that certain species of fish were reduced, or endangered.

Now I realize the depth of the problem is so much greater.

Not only are many fish species depleted (blue-fin tuna depleted by 97% or more), but many shark species are down 90% or more due to the practice of finning, where millions of sharks are killed each year to make "something that tastes like nothing," as explored by Chef Gordon Ramsay in this video.

Moreover, many whale species remain low in numbers, the result of a century and a half of whaling (in the 19th and early part of the 20th century) and continued whaling by a few countries today, or are affected by ship strikings or noises which hamper their communication or food-locating abilities.

Globally, dolphins are killed by the tens of thousands annually.

Orcas and other marine mammals have fertility problems due to chemicals we have put into the environment, from DDT, to plastic byproducts, to chemical or oil spills.

If I was unaware of these problems (until January), how can anyone else, perhaps even less-aware than I, know of them?

I'm not sure if the problem is a lack of communication about these issues, or if these issues are simply too far removed from our daily existence.

But people need to know the problems now, while there is still time to fix them, and to enforce treatises and laws that ban the illegal killing of marine animals and protects their habitat -- the oceans.

I don't know what it will take for governments to step up to the plate. A social movement, likely. But it is hard to have a social movement when no one acknowledges or is aware of the problem.

I can only hope we are in the initial phases of a social movement to protect marine lives.

For, the adage goes:

We consider the oceans a resource to take from. But, every "resource," every animal, has a life. Some are more self-aware than others, but each life plays a part in the web that we too, are a part of.

It is time we make noise about it.

Ocean conservation is my obsession. My obsession is my mission. My mission is to advocate for our oceans.