Recently, a friend of mine sent me a message on Facebook, asking me why I hated the Susan G. Komen Foundation so much (I had been railing about Kohl's Pink Elephant in the Room campaign). I sent her a five-point, abridged version with my reasons, but I wanted to really write a well thought-out reason as to why I think Komen is the problem, not the solution.

Komen is allergic to reality.

Komen has ignored those living with metastatic breast cancer disease.

According to Peggy Orenstein's April 25, 2013 article in The New York Times called "Our Feel Good War on Breast Cancer," she wrote:

Last October, for the first time, Komen featured a woman with Stage 4 disease in its awareness-month ads, but the wording carefully emphasized the positive: "Although, today, she has tumors in her bones, her liver and her lungs, Bridget still has hope." (Bridget died earlier this month.) 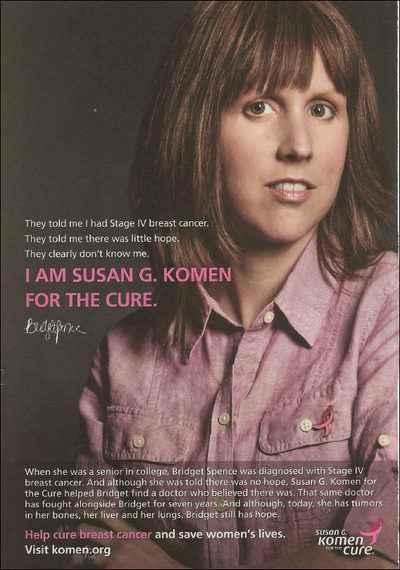 Komen has been around for decades, and it was only in 2012 that someone living with metastatic breast cancer was in any of its advertisements. I am very sorry that Bridget died at such a young age, and she was definitely entitled to her hope and mindset. But I hate that even when someone with Stage 4 is in a campaign, the wording is still positive and upbeat because heaven forbid, you get angry or upset at your diagnosis. Angry women and men with metastatic breast cancer need not apply.

For Stage IV patient Kimala Clark, 47, of Fort Wayne, Ind., it feels like a betrayal to walk into a grocery store and be "bombarded with pink."

"I can't celebrate because I'm not a survivor," said Clark, who was diagnosed in 2010 with an aggressive Stage III cancer that quickly advanced. "There's not a cure."

Isn't that heartbreaking? Later in the article, it mentions how during the entire month of October, only one day is dedicated to metastatic breast cancer:

In addition to questionable product endorsements, late-stage patients protest what they believe are unfairly limited funds for metastatic breast cancer research and a cursory focus on the end stages of the disease.

In all of October, for instance, only Oct. 13 -- Metastatic Breast Cancer Awareness Day -- focuses on late-stage disease, Clark says.

"I really would have liked to see that be more than one day. I think it's sad that there's 31 days in October and we have one day," she says.

Those living with and dying of metastatic breast cancer should be at the absolute forefront of the breast cancer discussion. No ifs, ands or buts. That's it. Yeah, I get those who want to celebrate their survivorship. Go right ahead. While you're celebrating, remember and response those who were diagnosed Stage 4. Your celebrations should never quiet those who are Stage 4.

One of the most gifted bloggers I have come across is Ann, who writes "Breast Cancer... but doctor I hate pink?" I think everyone should be reading and following Ann. She wrote a gut-punching, to-the-point blog post called "Pinktober from a Metastatic Point of View":

Metastatic women? Almost nothing. I believe there are fewer than ten support groups for advanced cancer listed in the U.S. Despite our differing needs, we are lumped in with all breast cancer groups, and worse, we have, in droves, been turned away from early stage groups, pulled aside and whispered to by coordinators, saying "you will frighten the early stage women." There are very few books for metastatic women as compared to the hundreds for early stage. Even online support groups end up with women fighting about whether early stage women should be allowed to post in the Stage IV sections. Many argue that they should be allowed there because they could have metastatic cancer any time, as if that means they understood what it is like now. There seems to be little available for our emotional needs.

We don't fit in with our "pink sisters." Our concerns are very different, yet we are expected to be just like them, after all, it's breast cancer. Alone, we are left to deal with real issues of life and death.

Who has created this environment where those with metastatic breast cancer feel marginalized and told to go away? Susan G.-freaking-Komen.

Love the tutus! MT @KomenNWNC: #TBT to last year’s Race! We can hardly wait to see all the outfits 9/27! #newdate pic.twitter.com/ETeM07XqdO 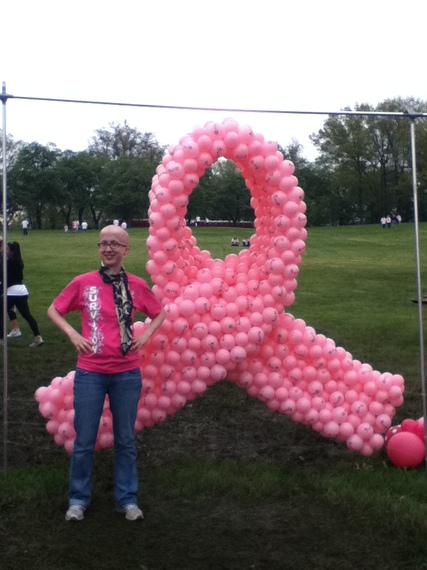 That's me in the picture, by the way, before I knew better. I have since thrown out that survivor t-shirt.

Let me go back to the Pink Elephant reference. 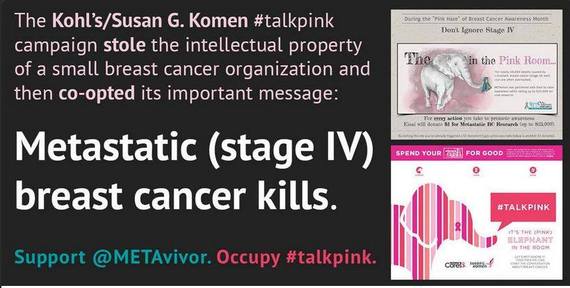 This graphic was made by Christina, whose sister Vanessa died of metastatic breast cancer in February 2014 at the age of 32.

Hey, guess what, Komen's corporate sponsor here - Kohl's - they co-opted the campaign from Metavivor, a small charity which dedicates 100 percent of its money received to funding research. From Metavivor's blog:

Also, isn't it telling that Komen and its partners can use the campaign and messages from other charities, but no no no, don't use "for the cure"?

Komen has sued smaller charities who use "for the cure."

A June 1, 2011 Star Tribune article reported that Komen sent a cease and desist letter to a small non-profit which raised $30,000 to fight breast cancer.

Sue Prom helped organize the "Mush for a Cure" sled-dog race to raise money to fight breast cancer five years ago, a fundraiser that was humming along nicely until it received a letter from an attorney for the organization Susan G. Komen for the Cure.

Komen, best known for its pink ribbons, Mother's Day runs and other mega-fundraisers for breast cancer research, asked Prom to stop using the phrase "for a cure" and to halt its request for a Mush for a Cure trademark.

"It was like, 'You've got to be kidding,'" said Prom, whose all-volunteer fundraiser outside Grand Marais, Minn., raised about $30,000 last year.

Do you think individuals who donated to Susan G. Komen foundation knew their money would be used to sue other charities who want to raise money like Prom was doing? Here's the kicker: Once national news shone a spotlight on Komen's bullshit move, they backed off.

Komen dropped its objection to the dog-sledding fundraiser earlier this year, Prom said, shortly after NBC News highlighted the plight of Mush for a Cure and a New York group called Kites for a Cure. In April, a certificate arrived in her mailbox giving her the trademark for "Mush for a Cure."

I doubt Komen changed its mind out of the goodness of its heart. Oh no. Bad publicity would affect its donations and bottom dollar, and of course that cannot happen. An August 5, 2010 article in The Wall Street Journal stated that Komen went after a small charity dedicated to raise money to fight lung cancer.

Last year, [Mary Ann] Tighe's Uniting Against Lung Cancer got a letter from Komen requesting it change the name of the charity's "Kites for a Cure" fund-raiser, a beach event featuring hand-decorated kites, to "Kites for a Cause," or another name. Komen later warned her against any use of pink in conjunction with "cure."

Ms. Tighe dug in her heels. She refused to change her group's name or declare pink off limits even though, she says, her group hadn't used the color. "We don't want to be the color police," says Ms. Tighe, who didn't feel she was poaching Komen's slogan.

But as the legal battle ensued, her group agreed to a truce where it would limit the use of the event name to lung-cancer activities, and it promised to stay away from the pink ribbons made popular by Komen. [Jonathan] Blum [Komen's legal counsel] characterized the negotiations as "cordial and productive."

Komen's former CEO and founder, Nancy Brinker, has made a lot of money.

Nancy G. Brinker promised her dying sister, Susan G. Komen, she would do everything in her power to end breast cancer forever.

I wonder if that promise included Ms. Brinker getting paid. I mean, girlfriend got seriously paid. Dolla dolla bill, y'all. A May 3, 2013 Dallas News article announced her payday:

The filing says Brinker devoted 55 hours to the cause each week, giving her an hourly rate of $239.40, roughly twice the salary of Komen's chief financial officer Mark Nadolny or former president Liz Thompson, who left the organization in as a result of the brouhaha.

News outlets compared her salary to others in a similar position.

"This pay package is way outside the norm," he said. "It's about a quarter of a million dollars more than what we see for charities of this size. ... This is more than the head of the Red Cross is making for an organization that is one-tenth the size of the Red Cross."

The American Red Cross had revenue of about $3.4 billion, while Komen's was about $340 million last year. Red Cross CEO Gail McGovern makes $500,000, according to the most recent financial documents available for the charity.

Way to honor your sister there, Nance.

Komen has yet to embrace this thing called science.

Komen has sold the myth that mammograms save lives and the world needs more mammograms and mammograms for everyone! Get one soon or you're going to die.... wait, what? 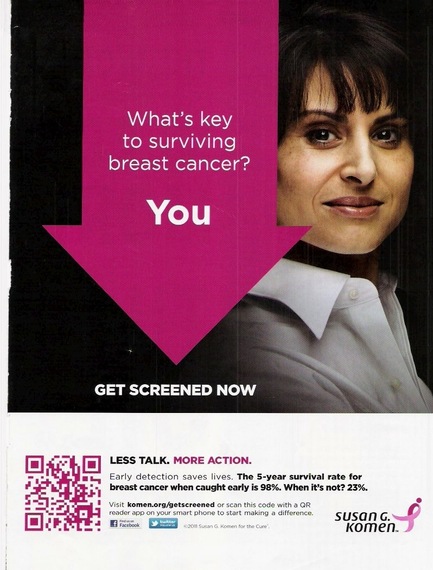 Rachel Cheetham Moro, the blogger behind Cancer Culture Chronicles and who died of metastatic breast cancer, had this to say about Komen and its campaign:

How dare Komen so FALSELY suggest that a screening mammogram is all it takes to avoid metastatic breast cancer? How dare Komen so CRUELLY suggest that "not getting screened for breast cancer in time" would be THE reason and the FAULT of the person with metastatic disease who misses out on all the experiences and joyous events of a long and healthy life that so many others take for granted? How dare you, Komen? How dare you?

Here is a great analysis, published on October 3, 2012, on the blog Pink Ribbon Blues and written by Christie Aschwanden:

Komen isn't wrong to encourage women to consider mammography. But they're dead wrong to imply that "the key to surviving breast cancer" is "you" and the difference between a 98% survival rate and a 23% one is vigilance on the part of the victim. This message flies in the face of basic cancer biology.

Between 2004 to 2009, Komen allocated 47 percent of it $1.54 billion toward education and screening. Much of its education messaging promotes the same false narrative as its ads, which means they are not only not furthering the search for a cure, they are harming the cause. By implying that the solution to breast cancer is screening, Komen distracts attention from the real problem, which is that way too many women (and men) are still dying of breast cancer, and screening is not saving them. We still can't prevent breast cancer, because we don't know what causes it.

To summarize, I'm not against Komen because of one thing or two things. It's more like a handful of things that have led me to know with all my heart and conviction that Susan G. Komen is the problem, not the solution. I believe Komen began with good intentions but has morphed into this pink ribbon behemoth. Women (and men) are dying from this disease every year, and we need to refocus (screw awareness -- WHO ISN'T AWARE OF BREAST CANCER?). They deserve better, much much better.