When I was a little boy, I read all the same books every kid read. I watched all the Disney movies everyone else saw. I knew the happily-ever-afters in and out. The prince found the princess and woke her up with a kiss, and they rode off into the sunset.

From the time I was 10, I was also doing musicals, so I figured out early on that I was gay. Even though I may not have known what it all meant, I knew I was different and that there had to be a reason that those movies weren't telling the happily-ever-after that played out in my head. So I hid.

I went to high school and continued doing musicals and hating sports -- ever the cliché, I could neither kick, throw nor catch a ball. By then, the only mention of gay people I ever heard was about AIDS. It was the late '80s, and being gay was no longer something that was invisible; it was a forbidden, terrible thing to be. Further into my closet I went. That 10-year-old voice in my head telling me that marriage would never happen for me grew ever louder.

In college things seemed to be changing. Despite seeing Matthew Shepard brutally murdered and the AIDS crisis continue, I was growing up. It was time to start standing up for who I was. I came out. But that 10-year-old in my head was still shouting, "You'll never get married! People like you will never be good enough for that!"

After college I moved to New York. I worked in theater, produced Broadway concerts and became a voice actor for Pokémon and dozens of other cartoons. I was out, and I was happy. I even had a few relationships. I was never wealthy, but I made ends meet. I was fighting for equality, and it felt right, but strangely enough, I still had that little boy's voice echoing in my head telling me that I'd never have that day -- the same one I'd seen my brothers through, and my best friend, twice. It wasn't something that made me angry -- ever. It was something I'd just accepted as fact.

A few years later I was putting together a rally to fight the anti-gay military policy "don't ask, don't tell." I'd brought a bus full of people from New York to D.C. for the event, and the night before, I was running to different gay bars around the city to promote the rally. I walked into Nellie's sports bar, and a man walked up to me.

Which of course I was, with rainbow flags emblazoned over all the gay bars. He grabbed half my flyers and spent the rest of the night chatting and getting people to join us for the rally the next morning.

Flash-forward a year and a half, and I was living in Washington, D.C., with Sean. It was New Year's Eve, and we were celebrating in a cozy gay bar with about 40 friends. As the countdown approached, no one was watching the TV. Everyone had turned to face Sean and me. I immediately knew something was up. Sean hugged me and whispered into my ear, "I have to ask you something." With tears in his eyes, and having created the public spectacle he knew an actor from New York would clearly love, Sean got down on one knee and asked me to marry him.

And for the first time in my life, I no longer hear that 10-year-old's voice.

We both now work as organizers in D.C., fighting for equality and teaching others how to fight for the things they care most about. We still don't make a lot of money, but we're happy -- happier than a lot of people I know. We're not wealthy, but we make ends meet. And next May we're going to get married in Provincetown, Mass. This isn't too far from where I grew up and where my mom (whose health won't allow her to travel too far) can get to fairly easily. Happily,some friends are pitching in to help us have the wedding we really want, and we couldn't be more grateful.

I'm marrying Sean Carlson because he is strong, and because he is a person I laugh with more than any other person I've ever met. I've watched him grow and have enjoyed growing with him. Sean is someone whose values I share. We spend evenings sometimes violently agreeing with one another on the important things we hold most dear to our hearts. On top of that, he loves my dog Eli -- truly, the two are inseparable. I'm marrying Sean to honor that 10-year-old who never dared to dream of what he might one day have. And I'm marrying him because I love him.

We understand that getting married is bound to be a political statement -- and while that's clearly not the reason we're getting married, I can't help but hope some 10-year-old kid out there doing Evita reads this and realizes that there is nothing that's too good for him. 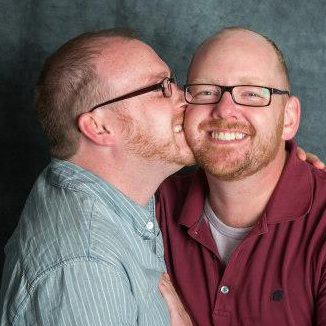