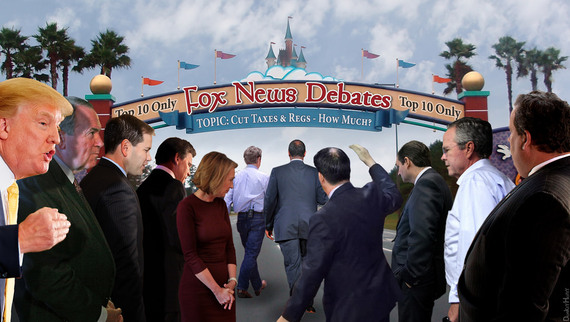 It's official. I am no longer a Republican. I know, I know, no one really cares and my opinion doesn't matter. However, I thought maybe I could throw a life preserver to a ship that is quickly sinking.

What the hell is going on with the Republican Party?

Unfortunately, everyone recognizes there is a problem except the Republican Party, which makes it difficult for them to affect change within. The people who have taken the most notice are Donald Trump and his political advisors who have been able to exploit those faults all the way to the Republican presidential nomination. A feat The New York Times referred to as a "hostile takeover of one of America's two major political parties."

Now, let me qualify myself before I move forward.

I have always identified myself as Republican despite growing up in a Democrat household. I can even remember in my earlier political years, sticking George W. Bush stickers on the bumper of my dad's truck (which didn't go over so well when I visited that weekend for dinner).

I identified with the Republican Party because of my beliefs. I have very Conservative views, yet I also hold true to many Liberal principles which I believe are good for everyone in the country. Call me a "leaner" or "moderate" and put me on whatever side of the aisle you want, but ask those who know me and Conservative is the term they will use.

Without getting into my specific views, I can also say that I have actually voted Democrat more than once, as the candidate at the time held closer to the will of the people than the Republican candidate.

Voter sentiment says it all.

If you have never believed in the anti-establishment movement, chances are you are now paying attention. People have always been dissatisfied with politics, but this time around it seems to have boiled over.

The race in New York was expected to be close. The result was quite the opposite with Trump taking the state with 60% of the vote. According to a CNN exit poll, Trump won over the hearts of Republicans in the state who were quoted as saying the next president should be someone "outside the establishment."

The Republican Primary in the state of Indiana was close. So close in fact that Senator Ted Cruz and Governor John Kasich (the other Republican candidates), openly conspired against Trump in an attempt to have Cruz win the state. The anti-establishment vote voiced their opinion of the plot, resulting in Trump's landslide victory in Indiana.

The Republican Party still doesn't seem to get it.

After Trump became the presumable Republican Party nominee, we should have seem a rave of Republicans jumping on board to support him (slight pause for laughter). Didn't happen. In fact, they made it worse.

How bad did they make it? Well, let's go back to the beginning of the primaries. The Republican Party made it a point to browbeat Trump into an agreement that he would support the eventual Republican nominee. The thought was that Trump would be forced to support the nominee once the Republican Party had the candidate they wanted to be in the White House. Then the tides changed.

Trump became the presumptive nominee and all of a sudden the Republican Party forgot about the pledge. Speaker of the House, Paul Ryan, comes out to say he is "not there yet" when asked if he supports Trump. What is even worse, Jeb Bush says straight out that he will not vote for him (despite Bush taking the same pledge as Trump to support the nominee).

It seems like the anti-establishment movement is finally getting its point across.

Now if you are Democrat and don't believe in the anti-establishment movement, then please explain the rise of Bernie Sanders (can't wait for the comments on that one). It's happening on both sides of the aisle and Democrats need to be careful as well. What is going on in the Republican Party can very easily infect the Democratic Party as well.

Democrats and Republicans alike are sick of politicians going to Washington and representing their own interests. Or worse yet, doing what they think is best for voters as opposed to representing the people who elected them. This is where the "Trump Train" gets its fuel.

To those who are part of the Republican elite, here are a few points to keep in mind. These are the same points that are being echoed by those who united to elevate Trump:

1. Many (not all) voters are choosing Trump because you are telling them not to.
2. They will continue to vote for him as long as you continue to act like their choice doesn't matter and you will do what you want anyway.
3. The more the Republican Party leadership refuse to endorse him, the more people like me that are going to leave the party and either vote for Trump or the eventual Democrat nominee.

I feel like the Republican Party has told me they don't care about my opinion and are going to do what they feel is best. That's not why I vote Republican! That's not true representation of the people! That's not American!

There you have it. The reason I am no longer a Republican.

In the end, the Republican Party still won't get it. If you don't believe me, see the comments on this post or on Twitter from the likely Republicans who will be bashing me for writing this article. Bear in mind that the comments will only go to prove my point about what's happening in the party.

So who am I voting for? Not sure at the moment. I like to vote based on logic but at the moment my head is caught up in the emotion. This much I know...I just stage dived into the anti-establishment movement and I'm not quite sure when my feet will be back on the ground.