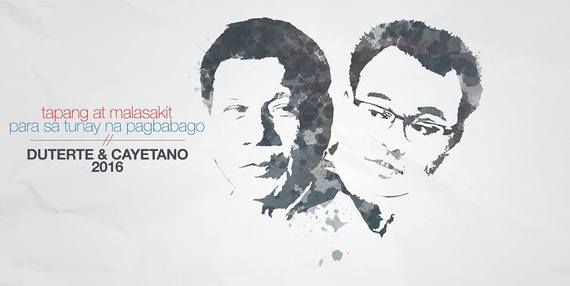 I made my decision while I'm sitting in a horrendous EDSA traffic Wednesday afternoon (Thank you, government). Seriously.

I always make an effort to vote with my head, not with my heart. Sometimes, my heart agrees. Sometimes, it does not. But this time, my heart and my head are in complete sync. They are telling me to vote for Rodrigo Duterte. I am voting for him because he is the most progressive presidential candidate that this country has ever had, a claim which I will go into briefly in this article.

I am aware that my vote will be just one out of millions. But it's mine. And I figured that I need to give it a careful consideration even if it gets drowned out by the mass of votes cast for everyone from Duterte to Poe to Roxas to Binay to Santiago and Darna. And I need to be able to communicate why I cast that vote, at least to myself.

As a gay man, I have my bias. I will always go for the candidate who will champion my interests. Among the five Philippine presidential candidates, Duterte and Poe are the only ones brave enough to support gay rights, particularly same sex marriage. 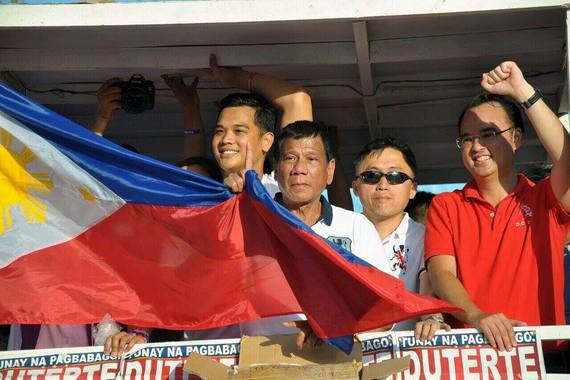 Despite possible backlash from the Catholic Church and other conservatives, Duterte said in one of his interviews that he would consider legalizing same sex marriage if a proposal is presented to him in the event he becomes president.

The man has always been consistent in his belief that the LGBT community deserves equal rights, and has supported them long before it was politically expendient to do so. In December 2012, Duterte, along with the Sangguniang Panglungsod of Davao City, unanimously approved an ordinance that bans discrimination against members of the third sex, minority groups and differently abled people.

Duterte, who was vice mayor of the City then, articulated that discrimination "is divisive and a barrier to social integration between and among peoples of different faiths, beliefs, sexual orientations, physical attributes and discordant loyalties."

He also expressed his support for the LGBT community when Sarangani representative and champion boxer Manny Pacquiao described same-sex couples as "worse than animals."

Duterte's stand on LGBT issues is in stark contrast with the current administration's, the Liberal Party, and its presidential candidate Mar Roxas, who has never showed support for LGBT rights. They wouldn't use the same words by Pacquiao, but they essentially stand by them.

LGBT rights are human rights. So what do you call government leaders who have the wherewithal to grant the citizens such rights but refuse to do so? Yes, human rights violators.

Duterte is a champion of women's rights

Duterte is a staunch advocate of women's rights and has the track record to prove it. 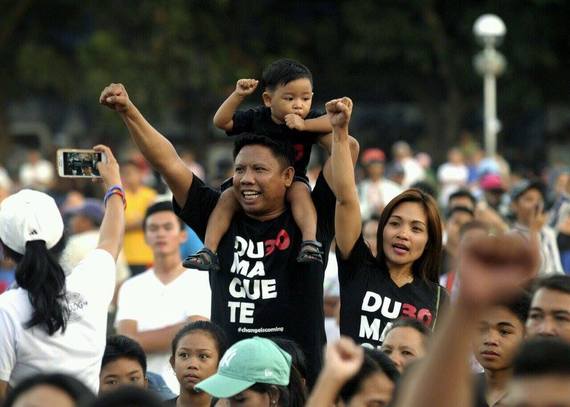 Duterte was the first politician in the Philippines to pass the Woman Development Code (Davao City Ordinance 5004). This legislation mainstreamed and institutionalized gender sensitivity in his city.

He has also established a Women and Children Protection Unit in Davao City to provide psychological intervention for victims of physical and sexual assualt; a 24-hour Gender Sensitive Crisis Intervention Unit for Women and an ordinance that pushed for the Women's Health Clinic.

In February 2014, he joined the globally coordinated event One Billion Rising for Justice Campaign, calling for the end of violence against women and children. During the event, Duterte appeared on the stage and said that what was the norm for women before to "have babies, and treated like a maid" are all things of the past. Women now, according to him, have asserted for their place in the workplace and in different roles once dominated by men.

And amidst the budget cut of the country's Reproductive Health Law and the government's indifference about it, Duterte reiterated that he would strengthen the government's family planning program, by giving incentives to couples who would opt to undergo ligation and other birth control methods.

Alan Cayetano said that Duterte's pro-women stance and policies should outweigh his political incorrectness. I agree.

The Philippines will be better off with federalism. Duterte knows this. 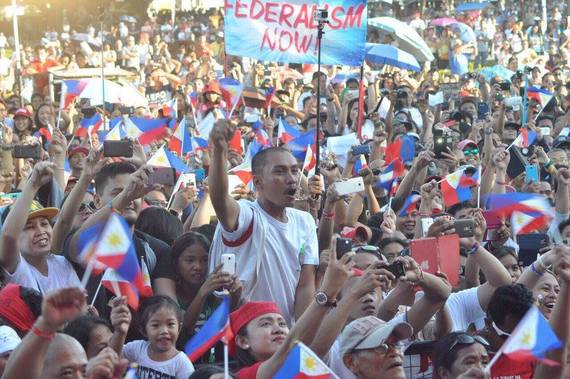 Filipino nationalists have to get a grip and face reality that we are a fragmented country geographically and ethnoliguistically. Asserting that we have the same needs as a nation doesn't work very well for a country that is as diverse as the Philippines.

For a crash course on why this country needs federalism, you ought to watch this video below:

Are you sick and tired of the traffic in EDSA? Then, federalism could just solve one of these long standing woes of the capital. Federalism will decentralize not only power but economic opportunities being concentrated in Metro Manila and distribute it amongst other regions. This system will render each "state" autonomous in terms of managing their economic policies and attracting businesses and investments.

Federalism will allow each state to use the money they make instead if sending a bulk of it to the Imperial Capital, and then the surplus will be re-allocated to them.

This is the whole point of Duterte on why he supports federalism. He wants to spread out economic opportunities in the entire Philippines, and not accumulate wealth within Metro Manila alone. State governments will be in competition against each other, which means they will have to work hard to come up with the best and most attractive economic policies that will bring investors in. Ultimately, this will benefit the entire country.

And size doesn't have anything to do with federalism. Switzerland and Austria have federal governments and they are smaller than the Philippines.

Duterte has the political will to even out power and wealth

Duterte could be a great president. He could be not. But that's exactly why I'm voting for him. If he wins, there's at least that 50% chance that he's going to kick ass and challenge the current system, which I'm quite sure the other presidentiables would love to maintain because they benefit from it.

But most importantly, Duterte has become a great movement leader. He connects well with everyone - old and young equalists (like I am) who dream of a free and equal society, men and women, the middle class, idealists and pragmatists, like no other politician could. 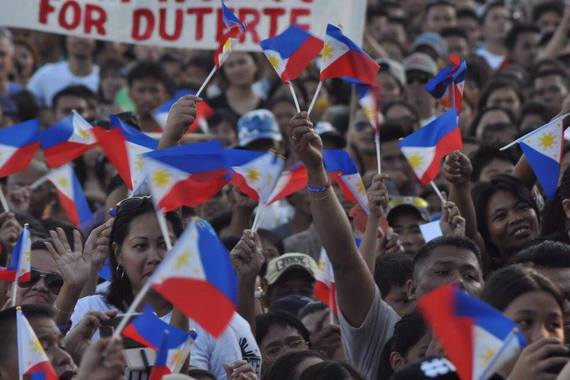 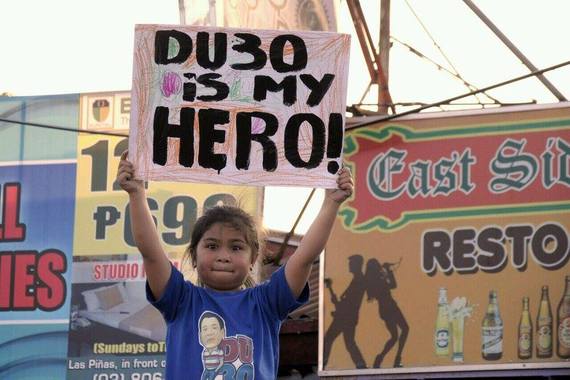 Duterte has been obviously effective in energizing this nation by leading a new movement of committed and politically conscious Filipino millennials. He has shaken the complacent and corporation-friendly centrist and right wingers of this country to their sycophantic, self-assured core. He has stood tall against the blitzkrieg of the bigoted shitheads and conservatives that comprise most of this country's political base.

And if Duterte doesn't win, I want the next president to be majestically scared to death to irritate this Duterte-led movement. I want the next president to think that if they turn their back on any of us - the women, the LGBT, the idealistic millennials, the leftists and the clamoring Filipino who is fed up of the present system - they will face the fury of the Duterte-engaged and enraged Filipino.

I want the next president to be made fully aware of what kind of politics this new breed of enlightened Filipino aspires for that they will start working on getting their presidential ass in the left lane and never, ever contemplates on swerving back the yellow line. We want freedom. We want equality. And we want it now!

This is why I am voting for Duterte. To assist the million of other Duterte supporters send a translucent and resounding battle cry: we're fucking here. And we're watching you. And you have got to serve our interests. The interest of the people, not just the privileged few. The interest of the oppressed and the marginalized, not just the elites. Because if not, there will be blood. And there will be chaos. And you're not going to like it.

You vote how you will. I won't contend or vilify your choice. We're a democracy and I am voting for Duterte. Both my head and my heart are in perfect harmony.