In January I attended a Trump rally in Rock Hill SC for the purpose of protesting against hate-speech in general and Islamophobia in particular. When the eight people I was with and I stood in silent protest we were made to leave. The fact that I am a Muslim woman who wears hijab piqued people's interest and the story went viral.

The thing I remembered most about the rally was not the hateful things people said to me as I was leaving, but the friendly interactions I had with Trump supporters before the rally started.

It was those interactions which prompted me to go to Cleveland during the Republican Convention with an initiative I called the Salam I Come in Peace project. We walked up to folks and said "Have a nice day", then handed them a flower pen with the Salam I come in Peace website printed on it. When people asked what it was about we explained we were trying to put a positive face on Islam and Muslims and let folks know that Islam does not promote terrorism. We had some great conversations where we each were able to share our concerns and clarify misconceptions. 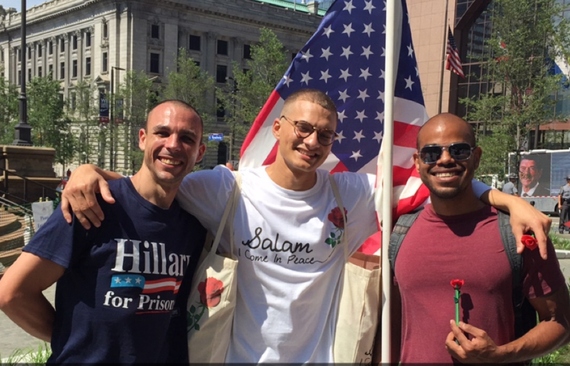 Samir Hamid with the Salam I Come In Peace project finding common ground with Trump supporters at the RNC in Cleveland Oh July 19, 2016

On August 18th Trump had a rally in Charlotte, NC, where I live. I attended, with flower pens in hand, hoping to have similar interactions with his supporters before the rally started. And I did, one woman was surprised to hear me agree with her button which read "Bomb the s*** out of ISIS". She appreciated my being there and answering her questions. 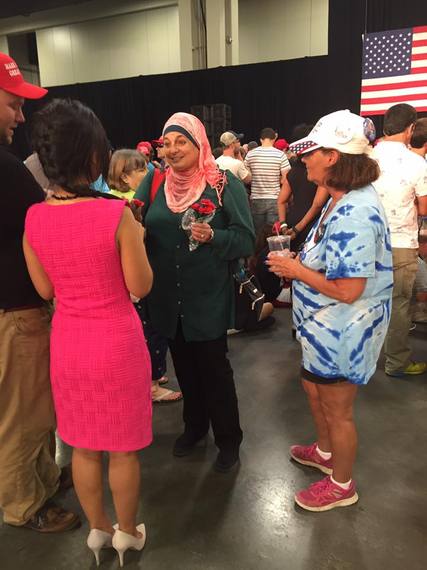 Unfortunately, Trump's head of security made me leave because he said I was a known disrupter. I tried to explain that I was not there to protest and I would leave when Trump arrived, but he didn't listen to me and made me leave. 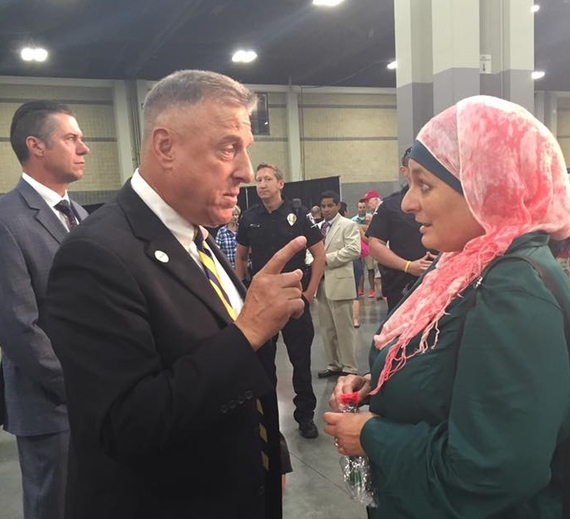 Trump's head of security telling me I had to leave the Aug. 18th rally in Charlotte NC (Photo by Huma Saleem)

There was another Trump rally in Charlotte on October 14th. This time I decided to notify the local Republican Party as well as the local and national Trump campaign of my plans. I let them know I wanted to chat with folks as they waited for the rally to start. I'd hand out pens and only engage with those who wanted to chat. I'd explain that Islam does not promote terrorism and answer any questions they may have. And I would leave when the event started.

The few people from the Republican Party who responded were pleased to hear my purpose and goals. They didn't think there would be a problem with me talking to folks before the event started. Although I didn't hear back from the Trump campaign, I attended the rally with high hopes.

When I arrived, the first person I handed a flower pen to said she gets scared when she sees people dressed like me (Islamic head covering). She said "I hate Muslims. I know a lot of people who died on September 11th." Then she brought up some inaccurate theories about Islam and Muslims. Like the fallacy that Muslims are trying to institute Sharia (Islamic) Law in America and the debunked myth that Dearborn Michigan, which has a high concentration of Muslims, is a "No-Go Zone."

I explained the reality of those and other misconceptions and let her know she did not need to be afraid of the religion of Islam. I referred her to the website printed on the pen, where she could get answers to frequently asked questions. 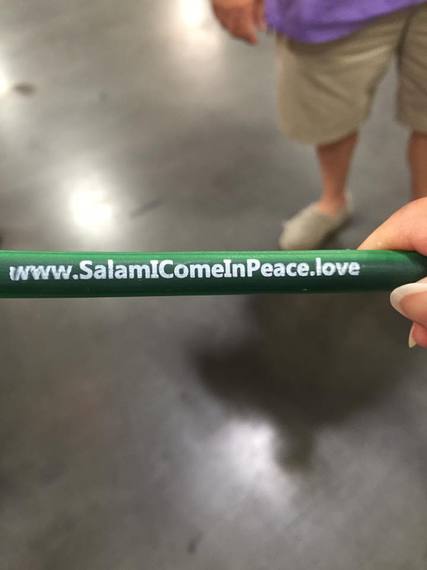 In the end she said she felt God had sent me to her to explain things. And THAT is why I go to Trump rallies. I want to interact with people like her, and who say they hate Muslims, who would not go to open houses at Mosques or read pamphlets which explain that the religion of Islam does not promote terrorism.

Unfortunately about 25 minutes after I arrived, someone from the Trump campaign said I was not welcome there and he made me leave. No matter what I said or what the reality was, their erroneous perception of me labeled me as "not welcome." That mindset is one of the things that scares me about a Trump presidency. Another concern is that his hateful rhetoric can empower folks with hate in their hearts to act out against people who they perceive to be the enemy.

What I've experienced at Trump rallies and the RNC convention is that the overwhelming majority of people are decent. And even though we are different on many levels we could still have meaningful discussions and learn from each other. Once this election is over we are all going to have to come together to work for what is best for our country and the world. However, we have to be careful about who and what we give power to. We cannot allow fear and hate to define who we are as people or as a country.